Your presence is requested for a State of the Empire Address on 24 May, 1843.

Any requests for information should be sent in advance to the Blachernae palace.

The following newspapers were considered significant by the archivists. 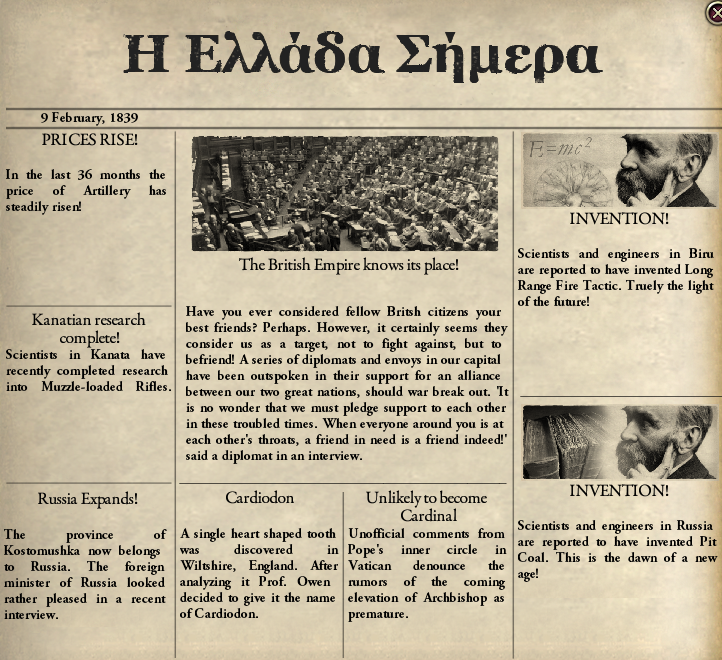 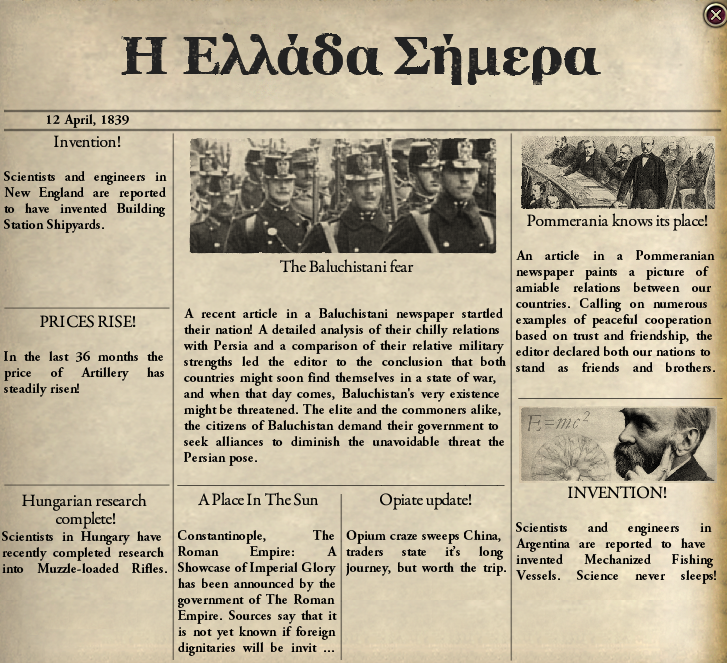 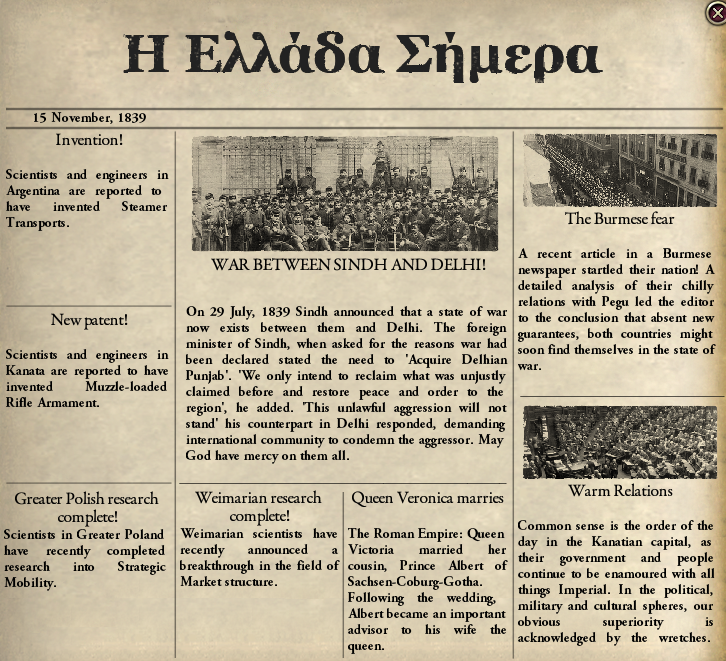 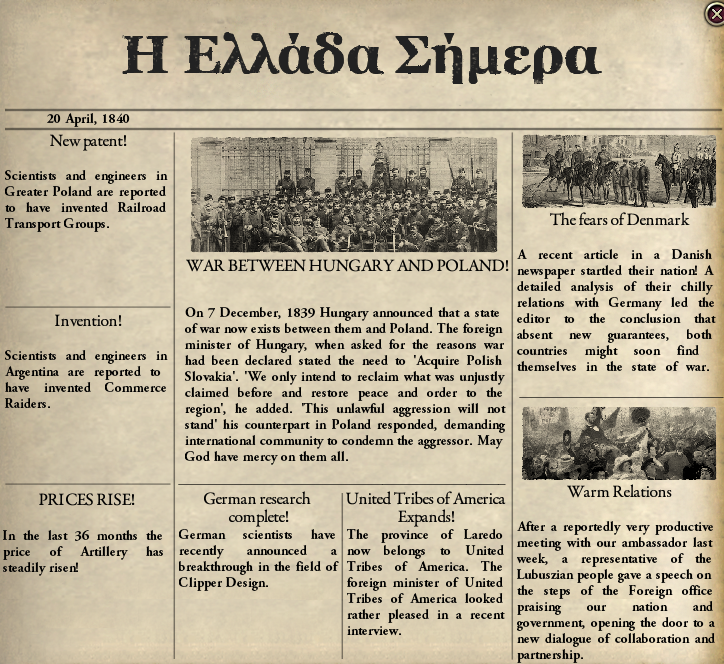 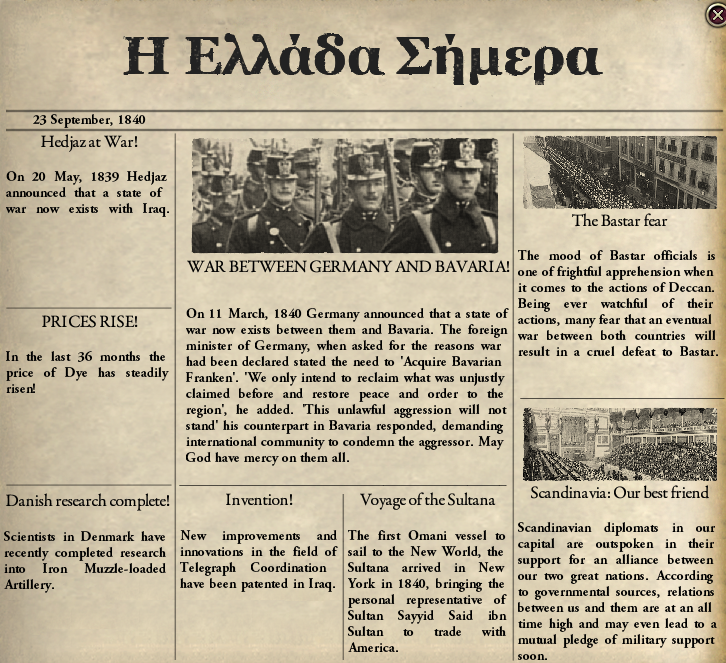 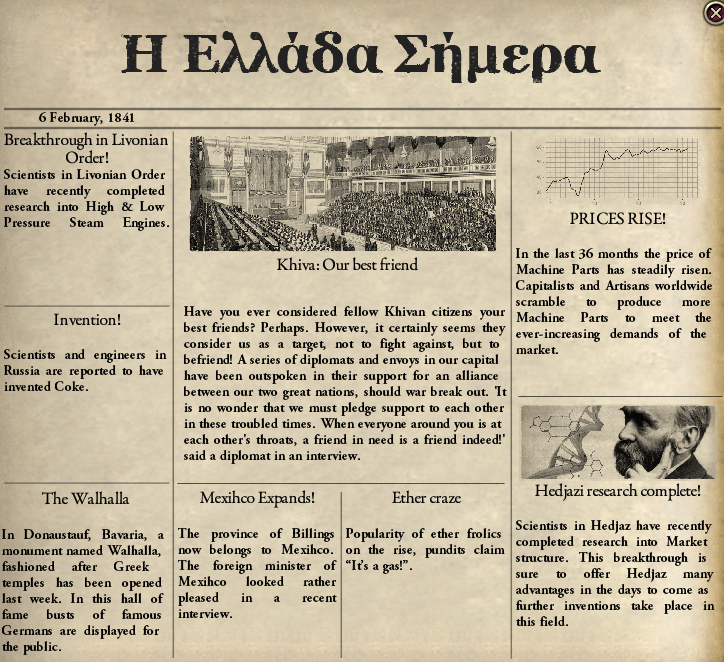 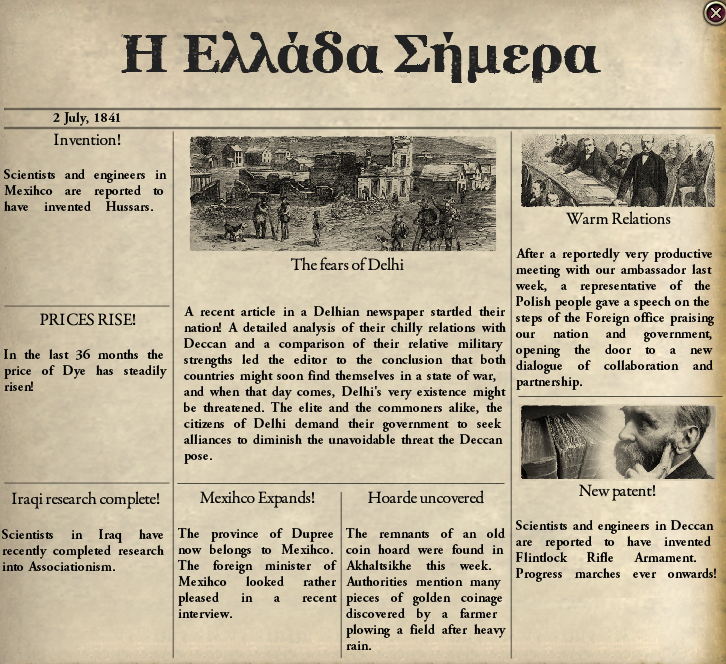 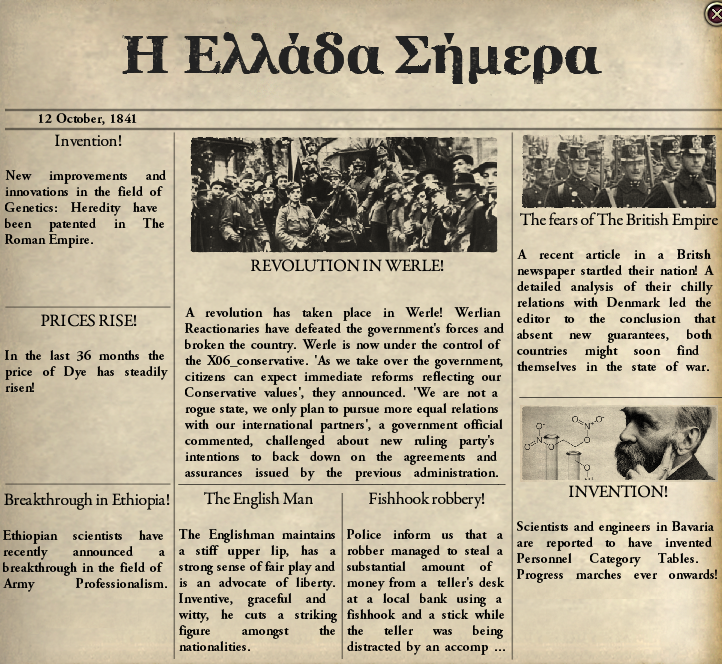 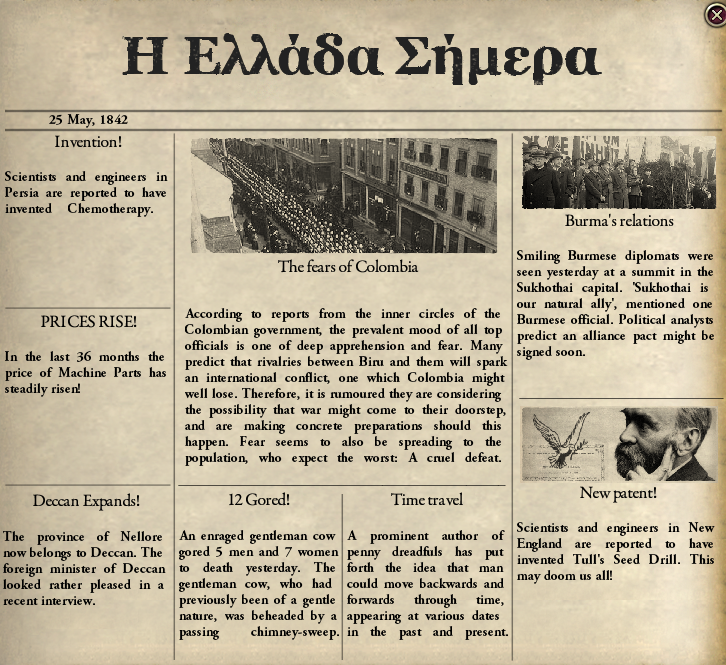 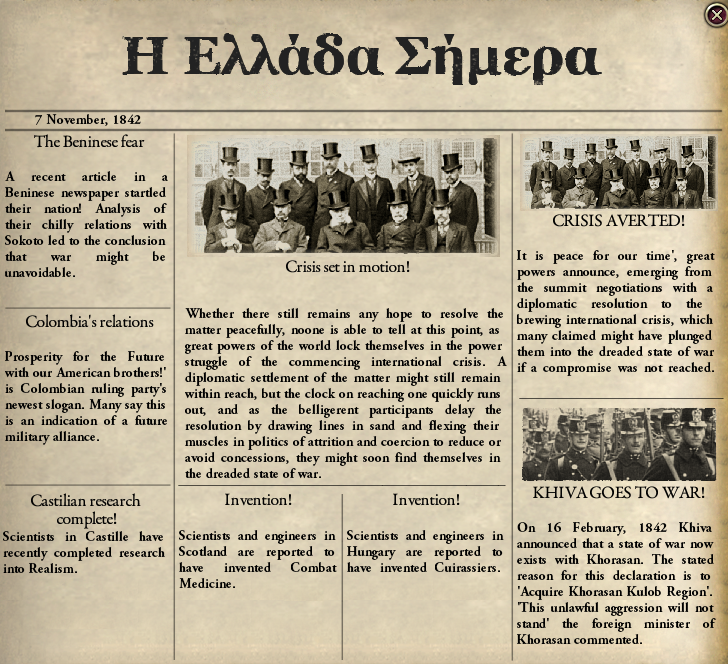 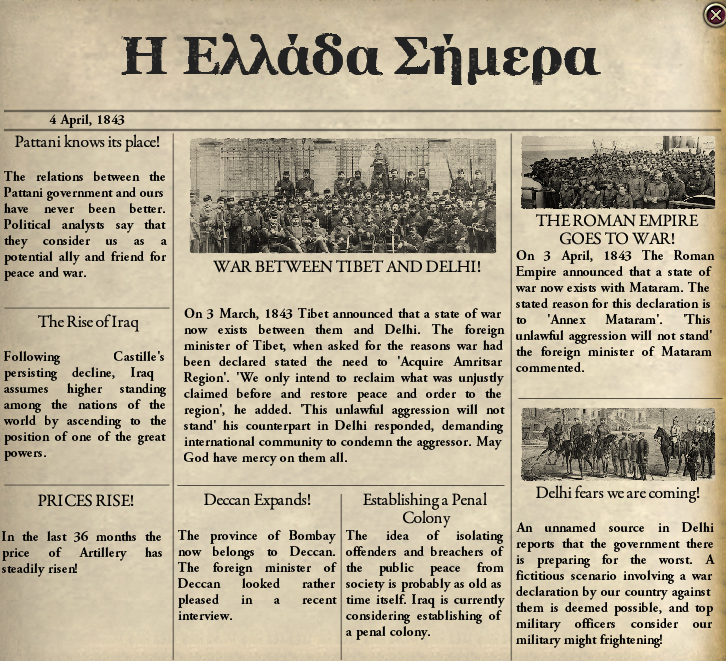 Messages to the Palace

Empress I assume our staunch ally in Germany has not called us into they petty feud with the vile Bavarian?

I also agree we should invade and destroy Delhi as per their fears.

Whoever writes these papers should be drawn and quartered. Either they called Empress Veronica a mere queen and gave the wrong name for her husband, or they are referring to some foreign queen named Victoria and used our Empress’ name for the title. And who are these mysterious X06_conservatives who took power in Werle? What a strange name for a group.

It would seem that the Scandinavians look upon us quite favourably. Perhaps they could be of some use against the Russians. An alliance should be considered if possible.

My dearest Empress, what is the current colonial situation of Africa at the moment? I wish our Empire and its soldiers all the best in its fight against Mataram.

After the last address, the Scholai Palatinae escorted the royal family to Blachernae, which had begun refurbishment. Likewise, funds had been allocated for the restoration of the Grand Palace under your direction and for your use. 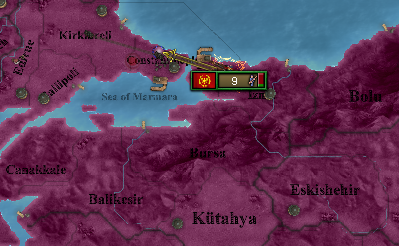 We immediately sent diplomats to Poland and Hungary to assess their feelings towards the Empire and to draw them closer to us, if possible. Poland was wary of any alliances due to fears of being part of grand coalitions, though our diplomat was yet able to increase our relations. Our diplomat to Hungary reported anger at our possession of lands they considered theirs. Of course, We soon found the real reason was that they had formed an alliance with Russia. Soon after, Hungary declared war on Poland for the bit of Slovakia under Polish rule, and Russia joined in their aggression. 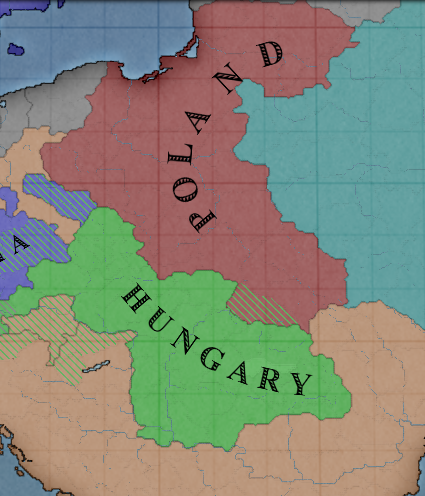 Across the ocean, Mexihco agreed to peace with the UTA, giving up what parts of Tejas they had previously possessed. 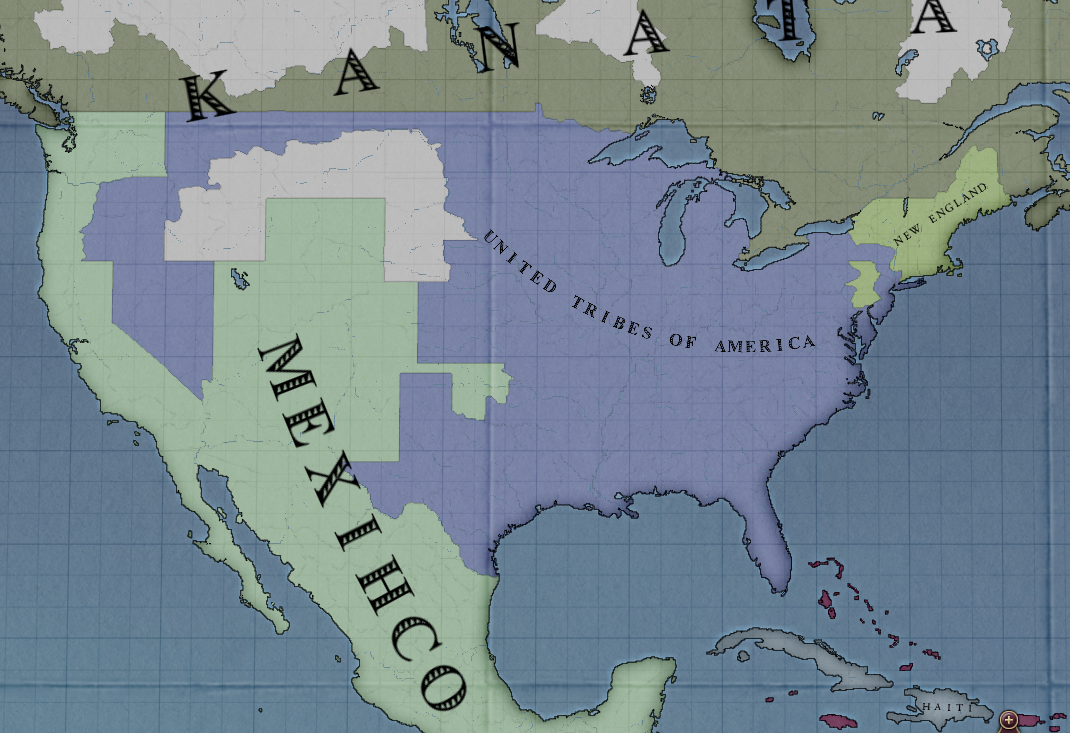 And in March of 1840, Germany declared war on Bavaria for Franken. 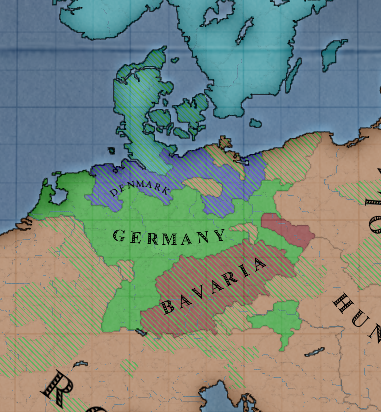 Meanwhile, We continued the process of upgrading naval bases and fortifying the Empire’s borders.

In April of 1840, Senator Galatias’ defense of non-Greek citizens was shown to be good when Henri-Gustave Delvigne, François Tamisier, and Louis-Étienne de Thouvenin all developed major improvements to the existing muskets used by the legions. Thus Our call for improved weapons for the Legions was answered. Simultaneously, the Imperial Corps of Engineers declared they would better function as engineering cohorts than as embedded in infantry cohorts, so We began the process of organizing two engineering cohorts per legion. Later a Parisian, Claude-Étienne Minié, improved on the firearms even more, creating a ball for the rifles that has been named after him. 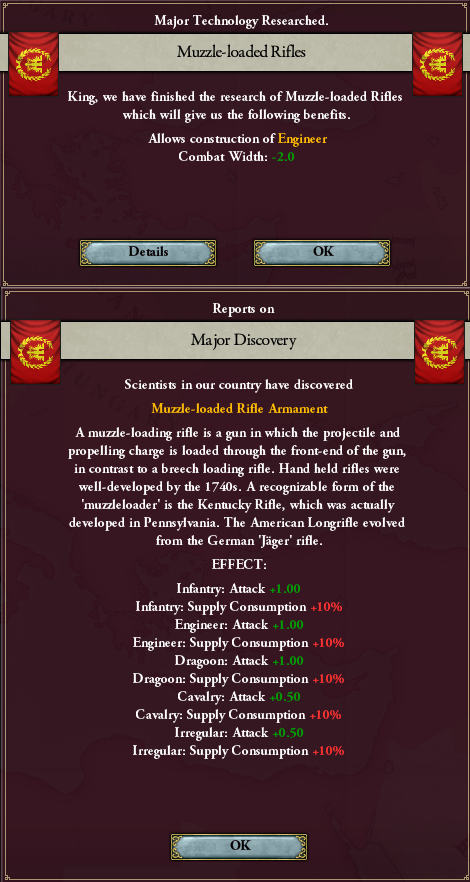 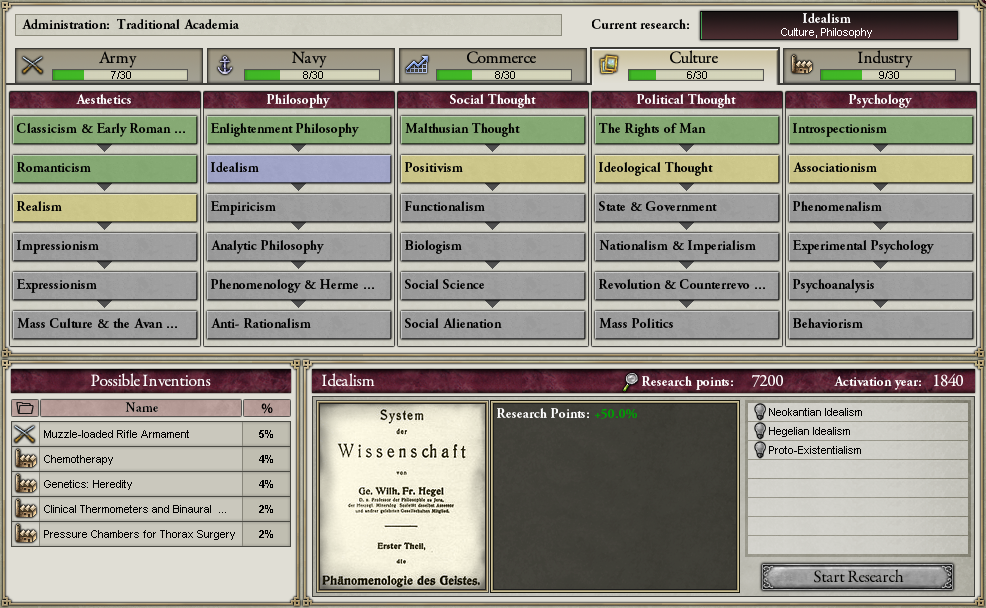 We spent this time increasing our influence in Ethiopia, and by 1841 we could consider them firmly in our sphere of influence. 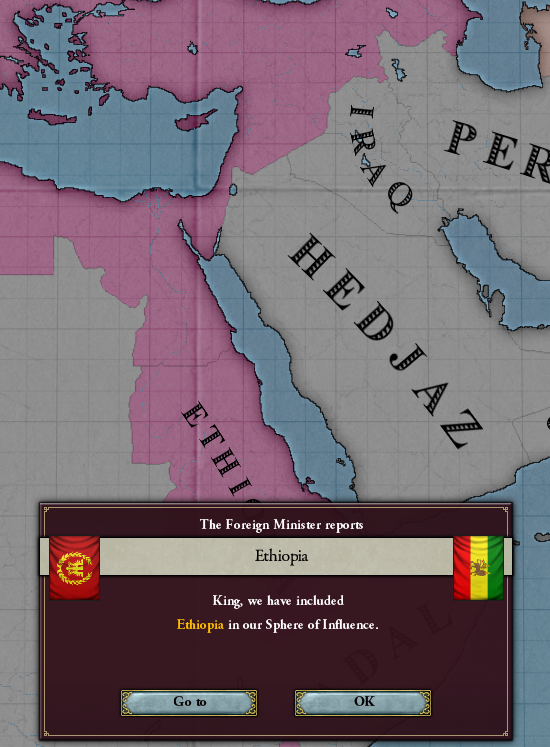 Not long after, Iraq’s war with Hedjaz, Persia, and Russia ended with them giving the Trans-Baikal region to Russia. Russia now held uninterrupted lands stretching from the Baltic to the Pacific.

And then Russia made peace with Poland: Hungary got the Slovakian lands they wanted, and Russia took Lieutva from Poland. It was fitting that Poland did not keep the lands they and taken from Livonia, but worrisome that those lands went to Russia. 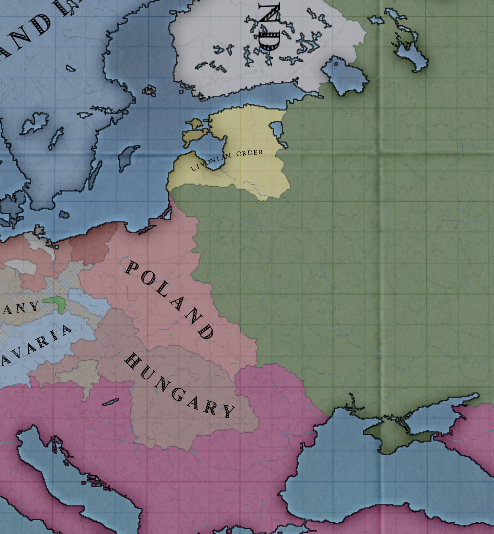 We began countering this influence by beginning to bring Japan into our sphere of influence. 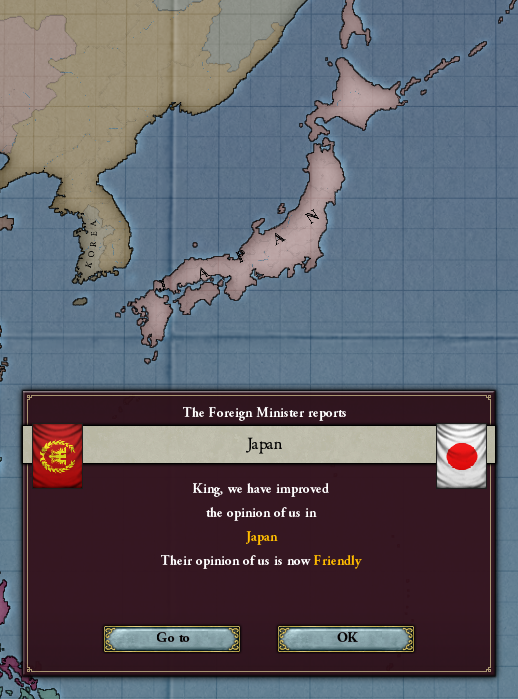 As the final shipyards and fortresses were planned, We began expanding the railroad network that had begun to form in the Empire. It was during this time that the philosophers began to expound about idealism. We asked them to apply these principles to better inspire the peoples of the Empire. 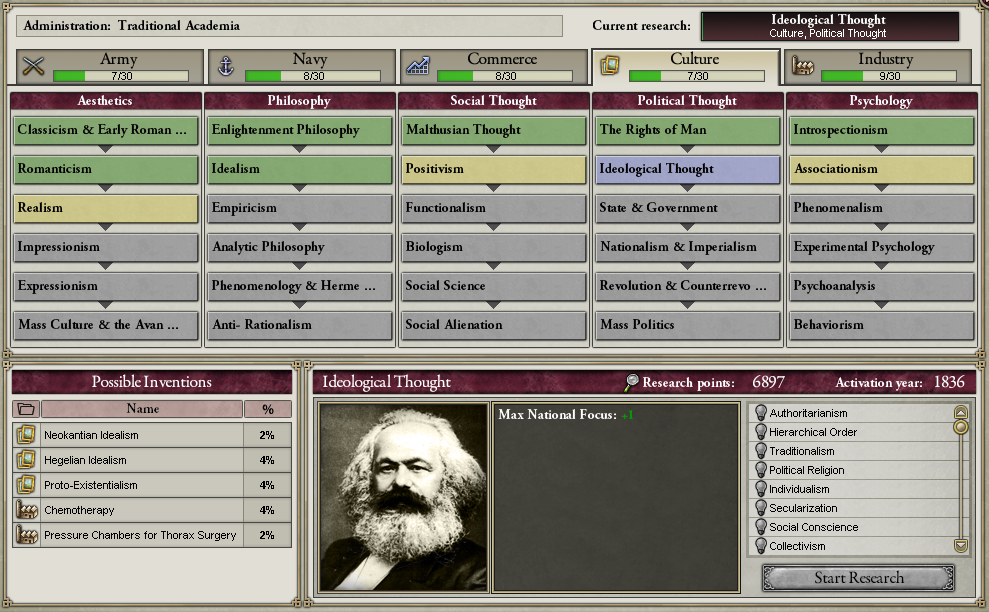 When Russia insulted an ambassador, We considered using this as a reason to go to war. But We preferred to ensure the Legions could be fully supplied from our own factories first. 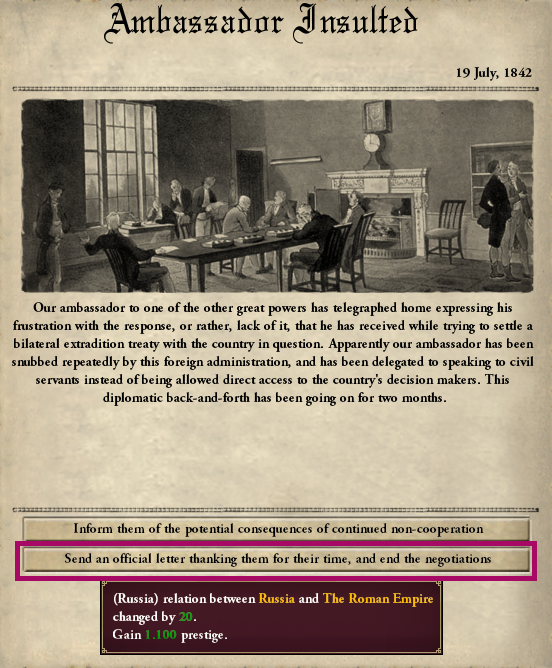 As the wars between major powers drew down, a crisis arose in the province in Sichuan. The area was controlled by the Ming, but Tibet claimed it should be a part of their nation. And indeed the people of Sichuan were more Tibetan than Chinese. Nevertheless, when Ming asked for our aid in the crisis, We agreed to assist them. Russia supported Tibet, further demonstrating their hostility to the Empire. But they quickly agreed to a peace, even as the legions only began to mobilize. 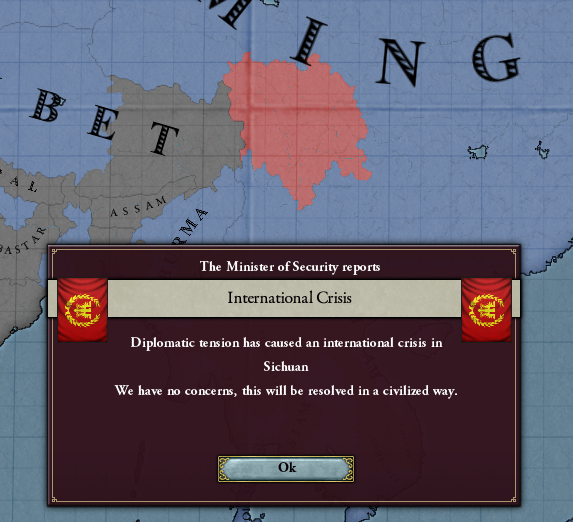 In the wake of this crisis, Castille’s arts no longer sufficed to promote them as a Great Power. Iraq instead was seen as a rising star. 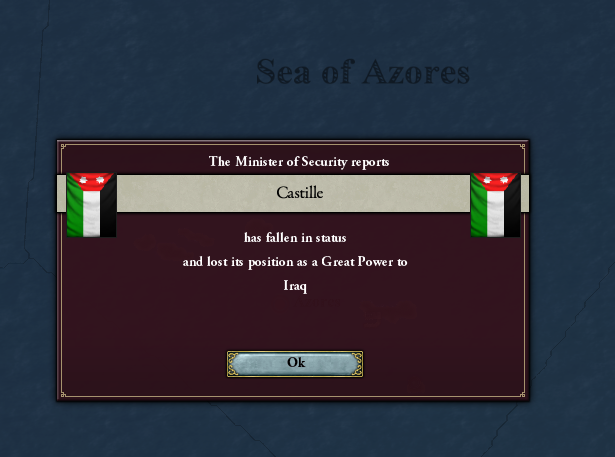 In February of 1843, Mataram claimed our merchants were purposefully violating the local laws in favor of trade. By April, their interference with our traders was to the point that We declared war to protect our traders. 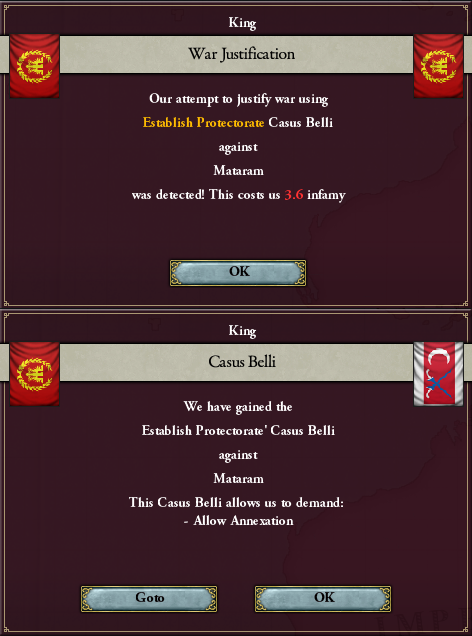 Before the month was over, Mataram surrendered, bringing the last of the island of Java under Imperial governance. 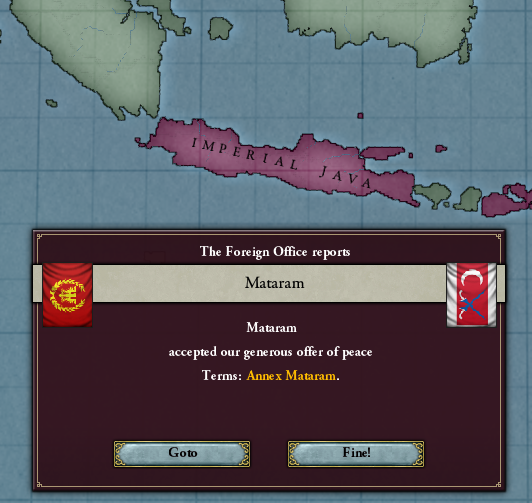 Meanwhile, Germany abandoned their war on Bavaria, being unable to defeat them, and strangely unwilling to ask the Empire for help. 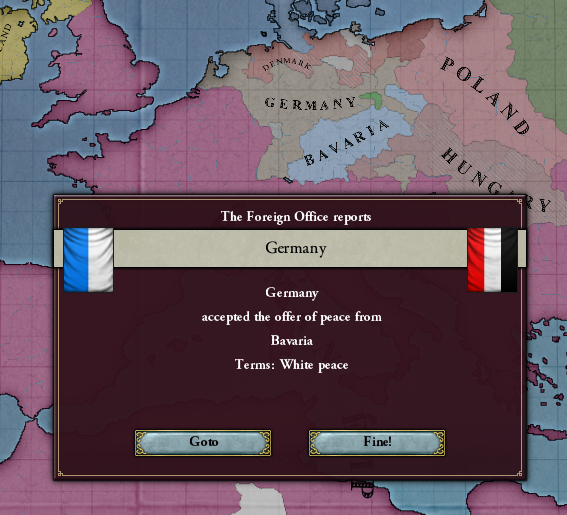 When we held a parade in Constantinople for our victories, We invited dignitaries from all major nations. 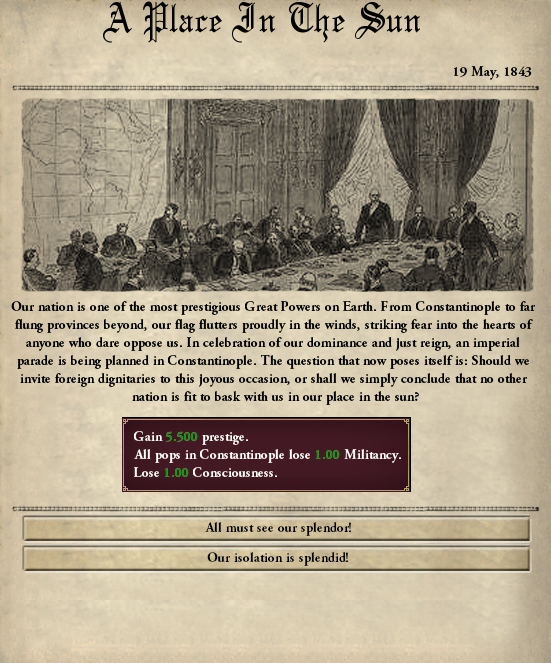 Finally, having upgraded all transport fleets to use steamer ships, We began production of commerce raiders to supplement and upgrade the Light Fleet guarding the Mediterranean.

Replies to the Senate's Messages

Now, to reply to your messages to Blachernae:

Senator Γκρέυ, would a diplomatic solution, bringing them into our sphere of influence, suffice?

Senator Favero, We can assure you that those responsible have been sacked. The state newspapers cannot allow such lax standards. As well, We shall look toward forming an alliance with Scandinavia. However, Russia considers the Kola region theirs, so such an alliance may be yet another potential source of conflict. 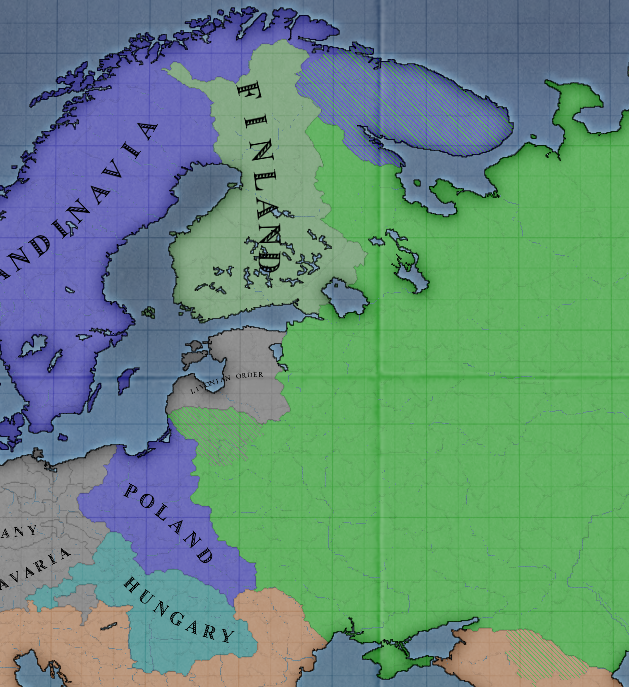 Senator Kishiev, the only region of interest in Africa right now is in the west, where a few nations formed small colonies during the collapse of order in the region. Scotland has come to control the Gambia River, England the Casamance River, and Castille the Geba river. Former slaves have formed the nation of Leberia, bordered to the north by another English colony. And the former Gold Coast is home to colonies from Scotland, Germany, England, and Denmark. Inland, Sokoto and Benin have begun to show some level of political organization, though in a more primitive form than when those lands swore fealty to the Empire. 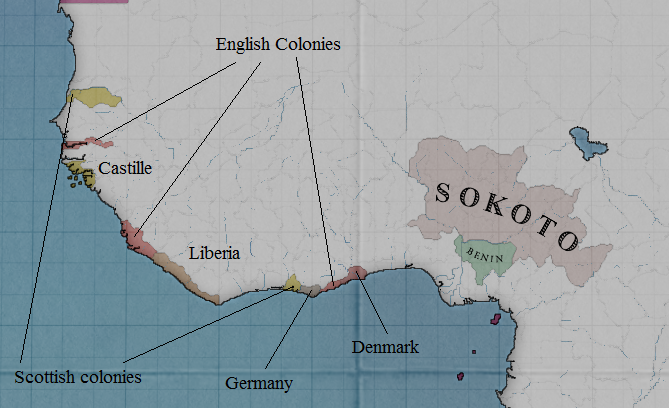 If instead you meant to ask about the Empire’s ability to form colonies, it seems that not enough people can be found willing to overcome the hardships at this time. Expansion in Africa is closed to us.

The Senate Speaks and the Empress Replies

Empress I congratulate our legions on defeating Mataram, it was a great way to show the World the Legions and Rome are not to be messed with. I would like to advocate for an Hungarian or Polish alliance at this time, they would be useful when we inevitably move against Russia.

I am curious if the imperial archives contain a list of all nations that claim Roman land in Europe as rightfully theirs, as I see our ally Germany may make such claims. It would be quite informative for considering potential alliances in the future.

While I understand the desire to not get dragged into conflict unprepared, if we do not stand up against these Russian brutes, they will roll across Europe. If the Russians truly want Scandinavian land, I say we let Scandinavia know that Russia will have to fight the Roman Empire as well to take it.

I call for the annexation or allegiance of the minor powers in Europe - Germany, Bavaria, Denmark, Poland and Hungary. If they cannot handle their own affairs, they should cede that responsibility to mighty Rhoma, before the Rus take it themselves.

A punitive war is the only way to deal with Russia and keep the Pontos Euxinos safe. The sooner, the better since we allow them currently to reenforce and break the balance of the countries north of the limes. Using the Barbarians from Japan could be a nice distratction given the size of their pesky empire. If your Highness doesn’t approve that expedition, I would advise to continue bringing the Spice islands under our control. Java might be the richest and most populous but the others deserve civilization too.

Senator Gallio, We shall seek such an alliance. As you point out, more allies bordering Russia will be quite useful.

Senator Angelos, We fear that such an endeavor is beyond the Empire’s means at this time. Yet We shall continue to form alliances to hem Russia in.

Senator Rellis, the Spice Islands are certainly within our means. Meanwhile, We can continue to build our industry so that the Legions are prepared for Russia.

Thank you for your time, Senators. Until the next address!

I know this session of the senate to be closed, however I thought I should back up a few of my colleagues.

Potitus Caristanius Gallio is correct in that we should bring the Poles closer to our Empire, however the Hungarians are only worthly of licking the dog mess from our boot heels. Their alliance with Russia must be nullifed.

Michelangelo Favero and Basileios Rellis are correct we must take action against Russia, any nation that may lose land or be attacked by Russia must be brought into our ranks, together we will humble this monster and bring it to heel. Sweden should have trust in our Legions to protect them and bring them more worthless tundra if they so wish.