Your presence is requested at a special session of the Senate on November 27, 1839, where Empress Veronica will address the Senate on the State of the Empire. As preparation for this session, whe following newspapers have been deemed significant by the archivists: 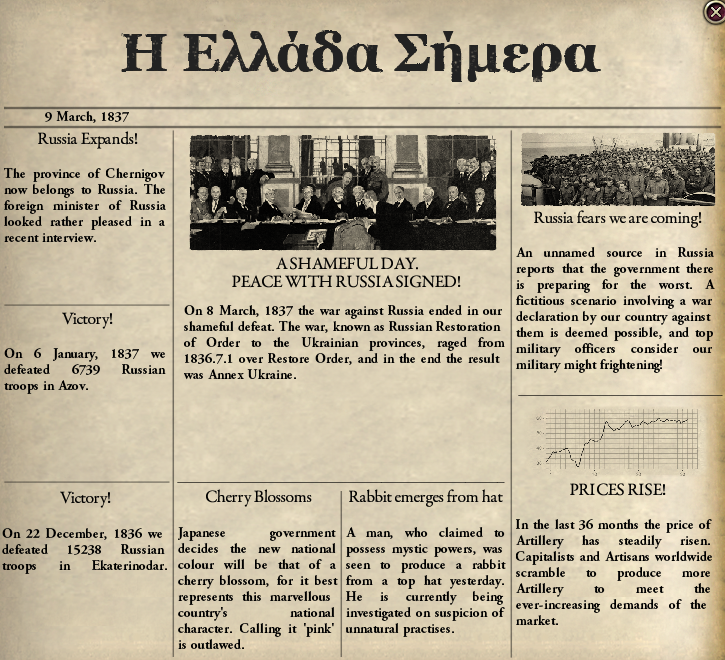 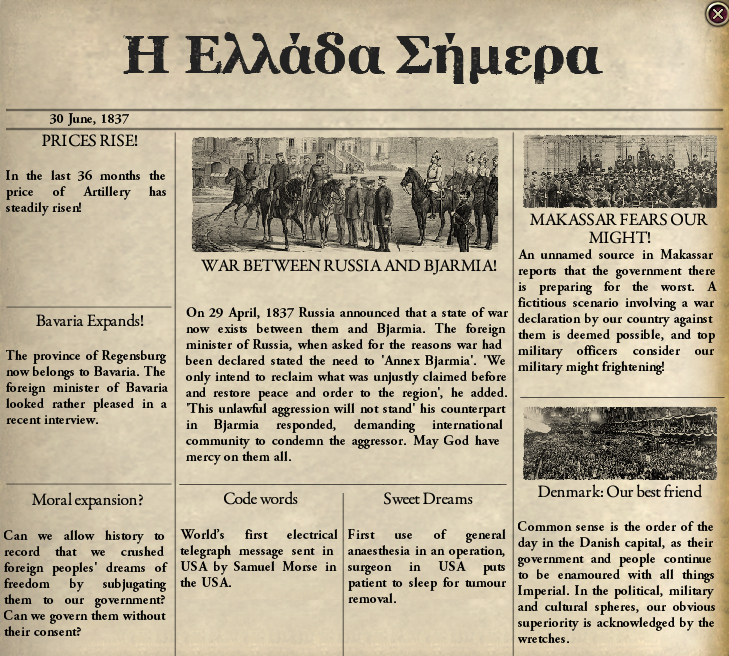 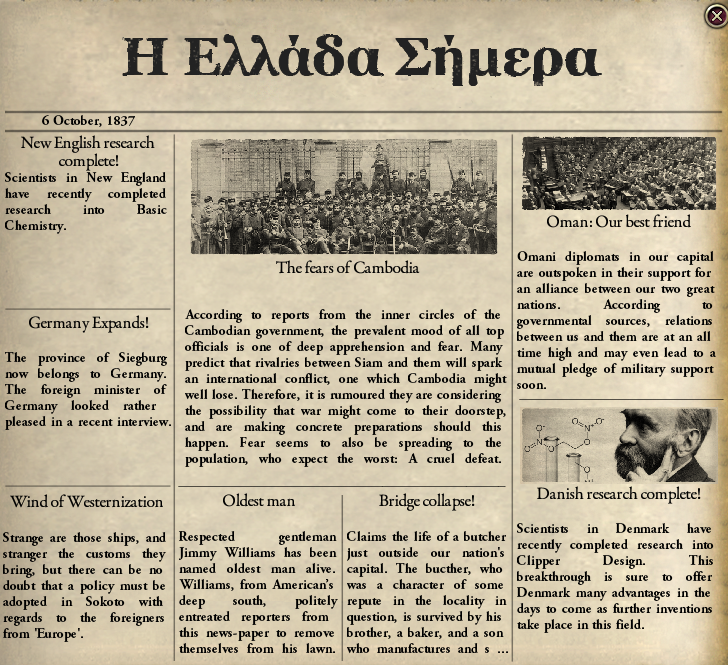 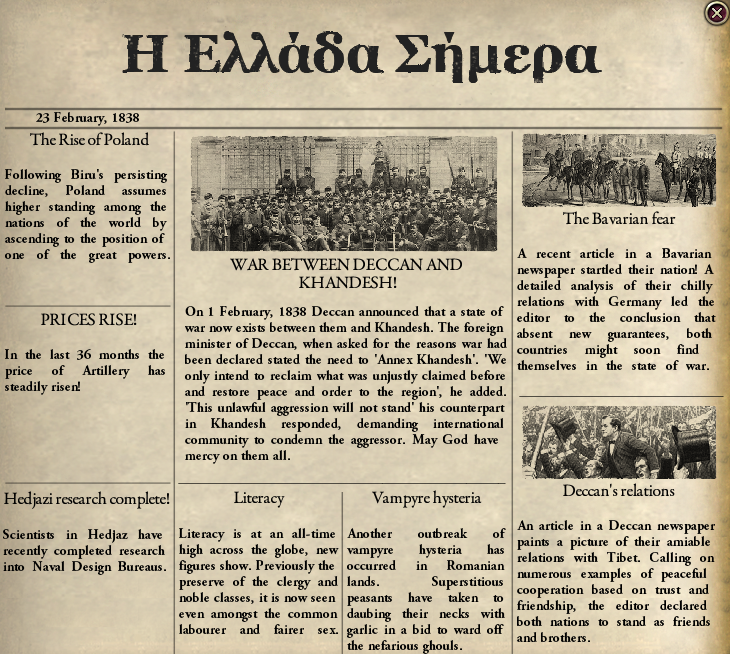 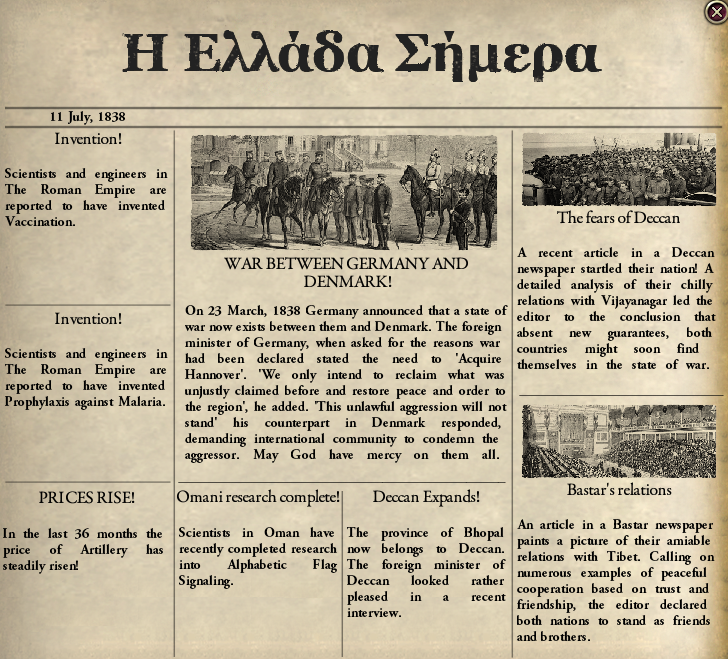 It would seem that the Russians are aware of our desire to see them weakened.  We must be extra careful if we are to take action against them in the future.

No, we must strike as soon as our treaty is over! Losing to the Rus was a humiliation upon our great empire, have you seen the news! They are calling it a shameful defeat and a loss in every sense! We have been hiding from the World Stage for to long and this defeat has not helped us regain our supreme standing on the World Stage.

Well our time sure is interesting. I think we should name one of these “dinosaurs” after one of our rulers.
Other than that I reserve my thoughts for the Empress.

In the wake of the Russo-Ukraine war, it seemed nobody could agree on what to do. But it was clear to Us that nothing could be done until the Legions were restored to strength.

While medicines were being researched, We resumed the industrial programs from before the wars. We began construction of clipper shipyards in Upper Egypt; canned food factories in Croatia, Van, Leon-Castilla (in addition to the ones in Southwest England and Picardie); machine parts factories in Granada, Bourgogne, West Switzerland, Wallonie, Nordrhein, and Karntern-Steiermark; a steamer shipyard in the (British) Midlands. This was more than sufficient to begin meeting the Empire’s needs, but it also proved that factories could provide gainful employment for otherwise unemployed citizens. So in any state with one hundred or more potential factory workers, We created new factories that fit the region. 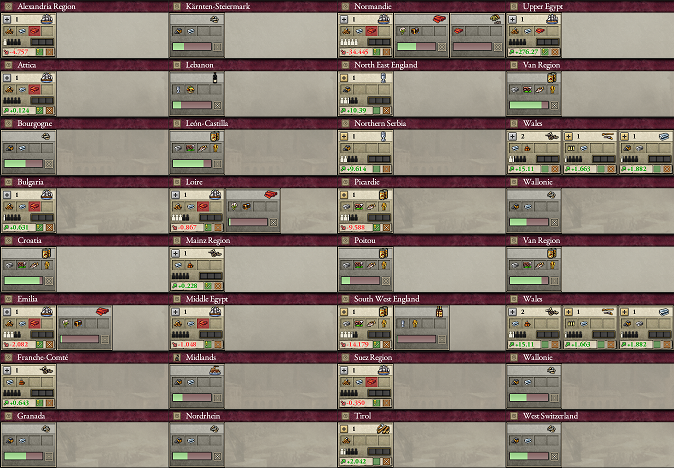 And We laid plans for naval bases all throughout the Empire. Those plans laid, We began fortifying the Caucasus and the regions nearby. This soon expanded into fortifying all of our borders.

As the Polish peace with the Livonian Order only took away a border state, We continued the process of bringing Livonia into our sphere of influence, a process completed in November 24, 1837. 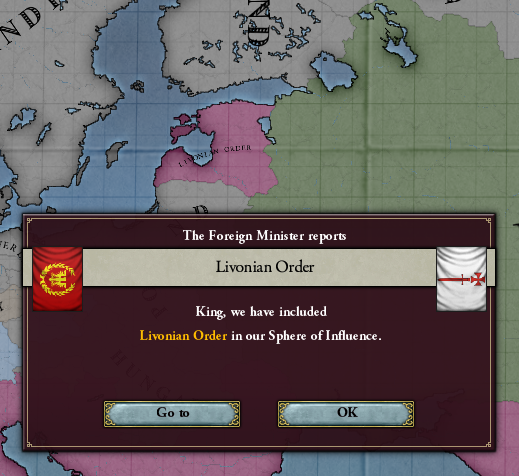 We then began pulling Poland into our sphere. But Poland soon became too great in their own right for such effort. 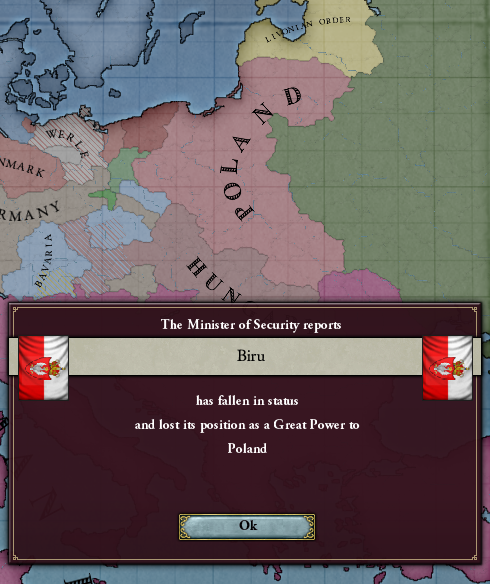 Instead, We focused on our southern border and sought to draw Ethiopia (long a friend of the Empire) into our sphere again. But Castille caused our efforts there to go astray. 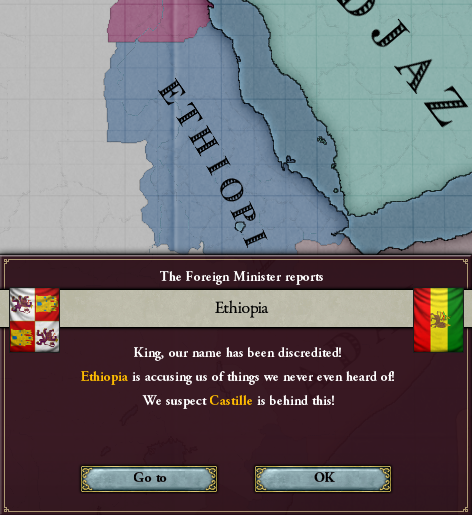 So We looked across the sea to the United Tribes of America. 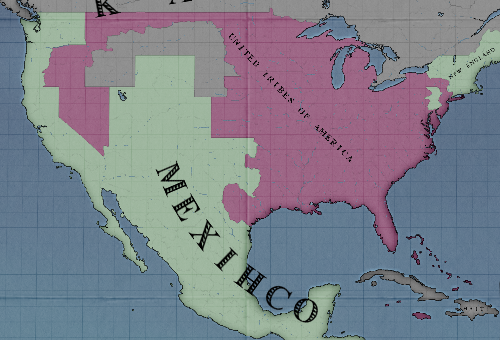 During this time of preparation, there was increased liberal agitation throughout the Empire. Secret societies sprung up everywhere, and local regulations against them only served to liberalize the population. Jacobins held marches in several provinces. The natives in Africa were angered by the number of big game hunts happening in their lands. People were strangely upset about the use of forced labor as a punishment. Business men complained about Imperial procurement contracts. Questions about how education for non-Greeks should be handled grew heated. And as the agitation grew worse, there were Luddite mobs that had to be put down with force. 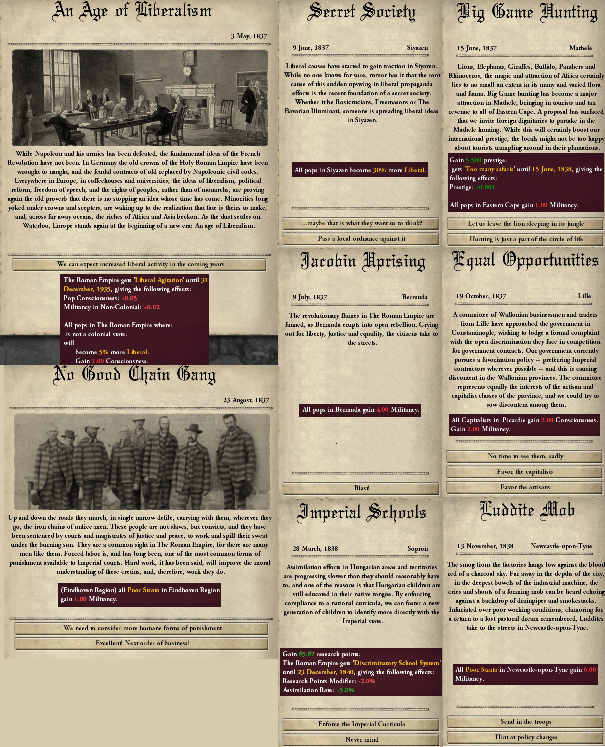 It is of no surprise that many of you first became more liberal, and later became more radicalized. 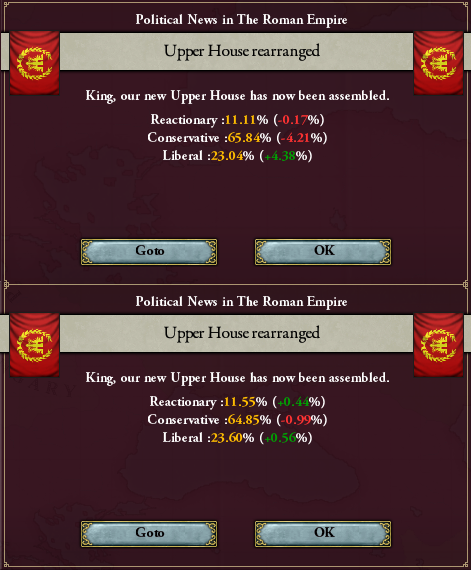 When the arts of medicine had advanced enough that most lands could support full-sized Legions, we tasked the Imperial Corps of Engineers with finding improvements to the weapons used by the Legions. 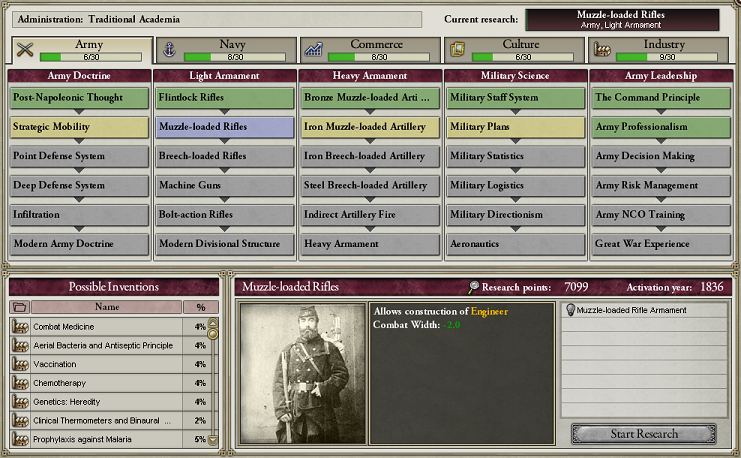 Sadly, this effort had only begun when Germany asked for our help in their war against Denmark and Pommerania. Fortunately, they did not need help in this war, so while we became the war leader, we needed spend no effort. 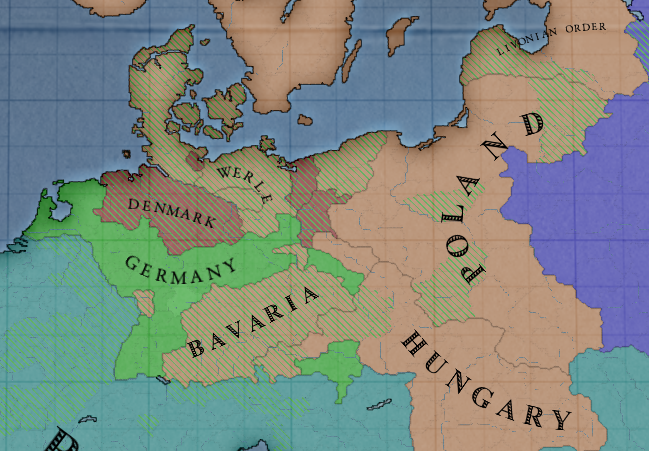 And with the advances in medicine, We were able to send colonists throughout Oceania, further expanding our hold on the region. 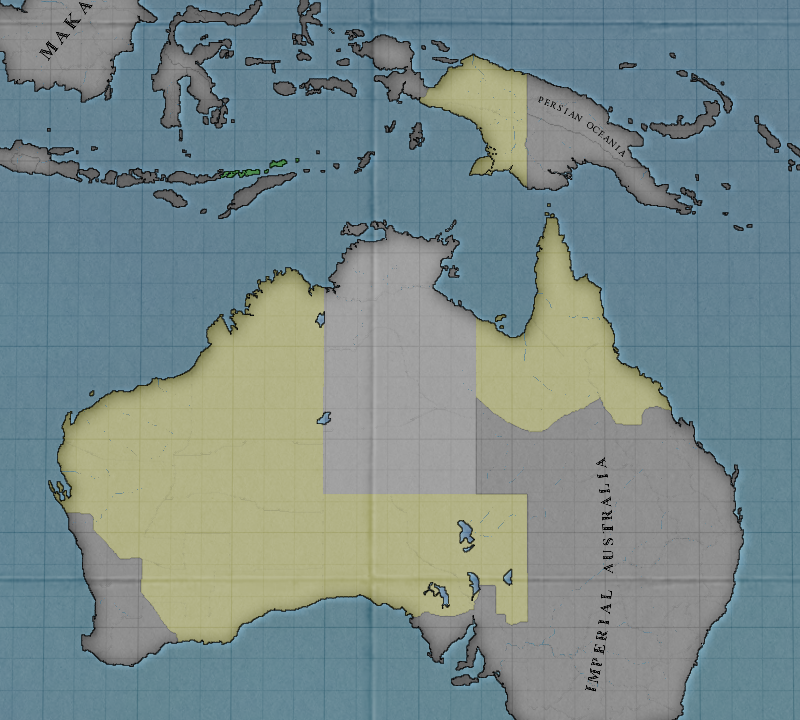 And this proved that it is now time for us to take our place in the sun. 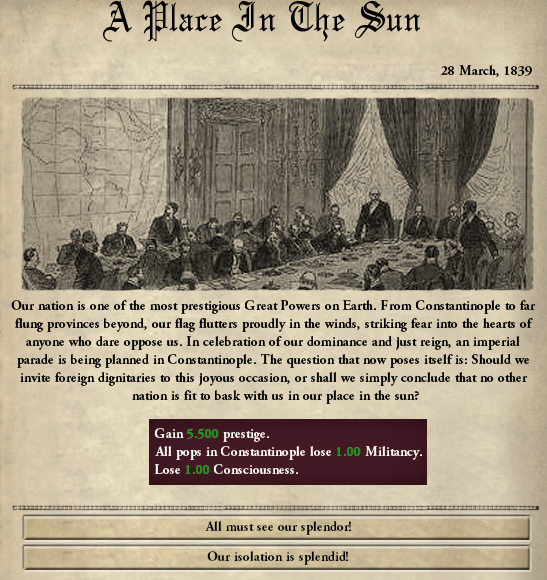 To demonstrate this, X. Legio assisted in the war against Denmark. They proved most effective in battle (the siegework was left to Germany).

But of course, domestic matters were more important. For among the refugees from Ukraine was my cousin Yevhen. We fell greatly in love, and so were married May 5, 1839. 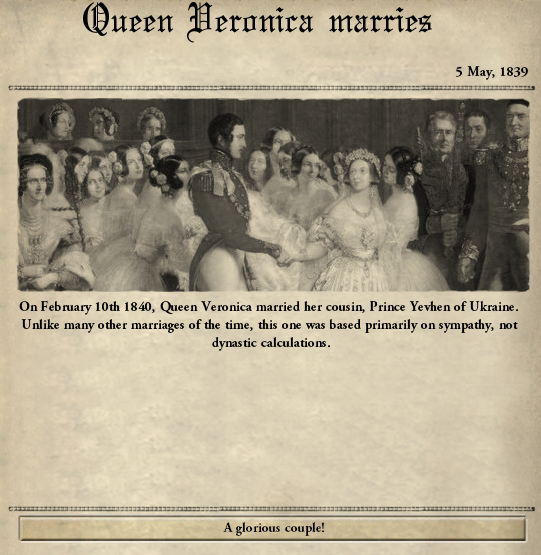 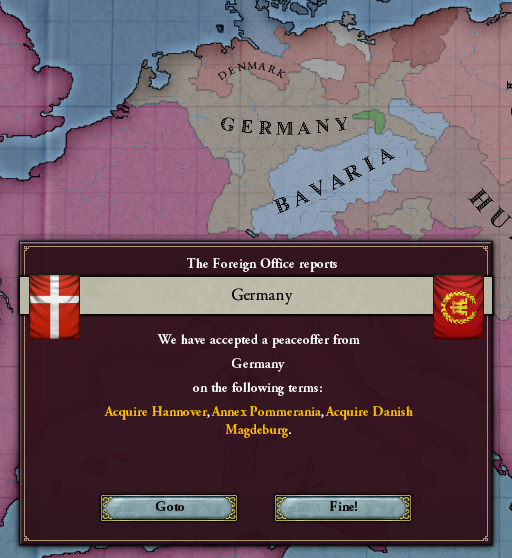 Also, during this time, Bavaria expanded, including into Hungary. 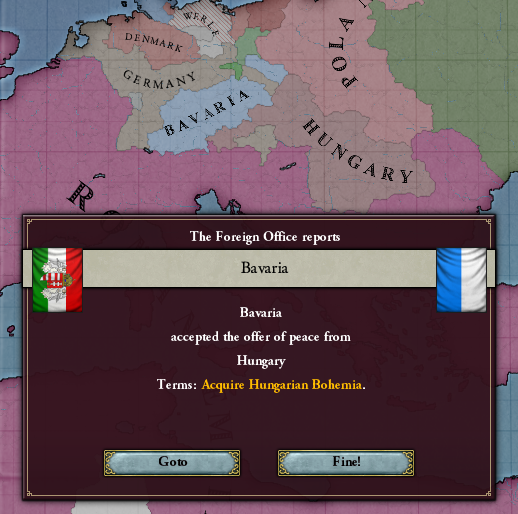 And Russia completely annexed Bjarmia as well as taking some border territories from Scandinavia. 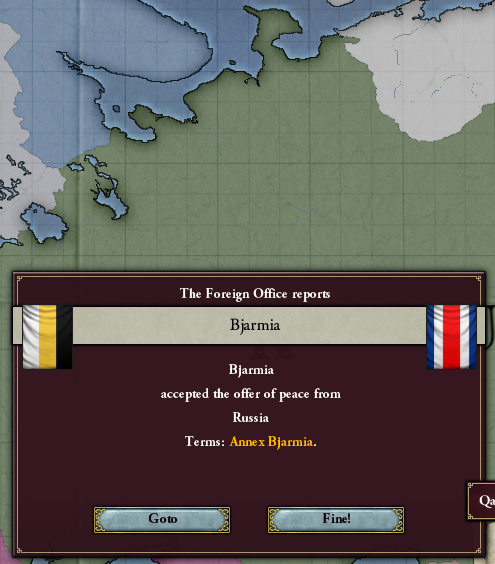 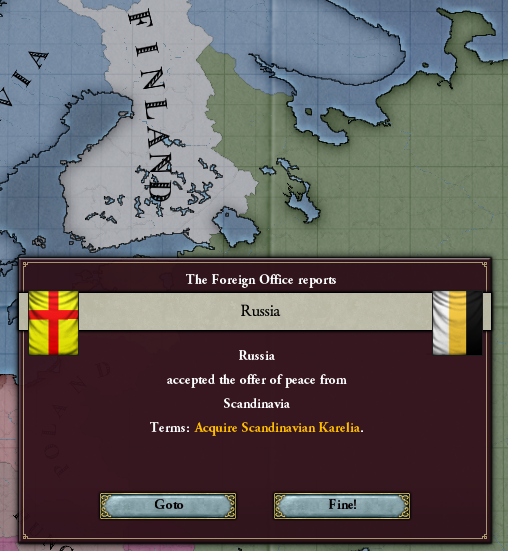 In addition to your usual recommendations, We also wish to propose that the royal family refurbish and begin using the palace at Blachernae again. The Scholai Palatinae would, of course, come with us.

In turn, the Senate’s use of the Great Palace would be properly formalized and written into law.

My most royal Majesty, would it be impudent of me to request an update of those that that dare to call themselves our peers?

I am sure I speak for all senators when I say that we would like to be able to advise on those near us that should be brought closer to the imperial fold and which of these worthless “Great Powers” we should crush beneath the legions heels.

A clerk quickly leaves the hall and returns a surprisingly short time later with a stack of broadsheets which are distributed to the Senators. 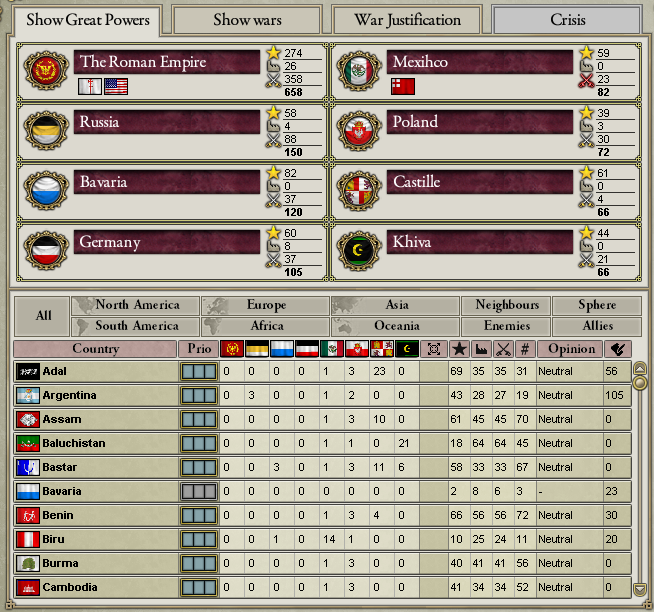 Congratulations to you, my Empress, on your marriage. Perhaps one day your husband’s home may be freed from the control of the perfidious Russians.

It is unfortunate that Poland was unwilling to accept our protection as the Livonian Order did. Are they still amiable to an alliance though?

Castille is most unwise to interfere in Ethiopia, a nation of great importance to the Empire.

Empress, would the Hungarians be amiable to our protection? Would be useful in any war in the East and stop the Bavarians from stealing their lands piecemeal.

May I be amongst the first to offer my warmest congratulations, most esteemed basilissa, on the occasion of your marriage? I am sure that kaisar Yevhen will make a spl,endid match for you,sebaste.”

Congratulations on your Marriage Veronica, may it be long and produce many heirs. Now down to business and first I would like to support Michelangelo Favero in his support for both an alliance with Poland and increased influence in Ethiopia. I want to condone the colonization of Australia and hope for further colonial expansion across the world. The maps should be painted purple! I also want to address Veronica’s interest in the UTA and all I can say is they are not fit for our influence. They are a bunch of tribal barbarians who can’t survive in a civil society. We must sail our Legions across the Atlantic Ocean and destroy them before they grow to powerful for us to handle.

I know I have said that about the Germans and the Rus but we cannot run anymore on the assumption that we will be the unchallenged masters of the world for much longer. I see powerful rivals in the UTA, Rus and the Germans, enemies that must be destroyed before they can kill us. I want also want to congratulate both the Empress and the Royal Engineers in finally bringing our Legions up to scratch. I further hope that we can become pioneers in the military field.

We have Livonian Order in our sphere, which is good. I must say that news from Poland are unfortunate, but from broadsheets provided by clerk we can tell that situation with Poland is not stable. Germany and Livonian Order, our allies and friends, have cores on them. Poland is ignoring Russia, our common threat. Also, they seem eager to expand internally*. I can suggest nothing less radical than partition of Poland, which I consider the best option to stop russian threat in Europe. Having in mind that Poland has no allies, it is higly possible that, if we don’t do it, Russia will.

I wish you and your new husband a lifetime of happiness, your Majesty. I also believe the recommendation to restore Blachernae and provide for us the use of a palace for affairs would be must conductive to the nature of the state – However, I hear there are problems arising between non-Greeks and Greeks in the Western regions. I take great interest in this, as my home lies in the lands settled by the Burgundians – for my mother herself was one of them. I am of Greek cloth, but I accept my barbarian ancestry as it helps me better and civilize those in the West – my suggestion is that we seek to co-opt their support, rather than grind down their cultural heritage into dust. We are Romans, let us make them Romans through education and noble rule, not through beating them down.

Thank you for your insight. We shall research what approaches can be taken to Poland. We fear they will not be amenable to an alliance, and the Westphalian system may make a partition impossible. Yet there should be some means of containing Russian expansion into Europe. Hungary as well will be approached.

But for the immediate future, We suspect that there can be no extended military campaigns. The Imperial stockpiles can only supply the Legions for a short time. It seems we have entered an age where a nation’s industry is the greatest factor in its strength.

We thank you for you amenability towards the restoration of Blachernae as a royal palace. The restoration will commence immediately.

Finally, We will strongly consider approaches to non-Greeks within the Empire that are less harsh.

Until the next address, Senators.