Doubtless you want an accounting of the Russian War.

In 1836, We decided that supplying the Legions was Our most important task. To that end, We tasked the Imperial Society with putting chemistry to the use of doctors, so that the Legions would not suffer such bad attrition.

In order that the Royal Society might better accomplish such tasks, We sent agents to recruit more clergy as teachers in the most populated regions of the Empire. 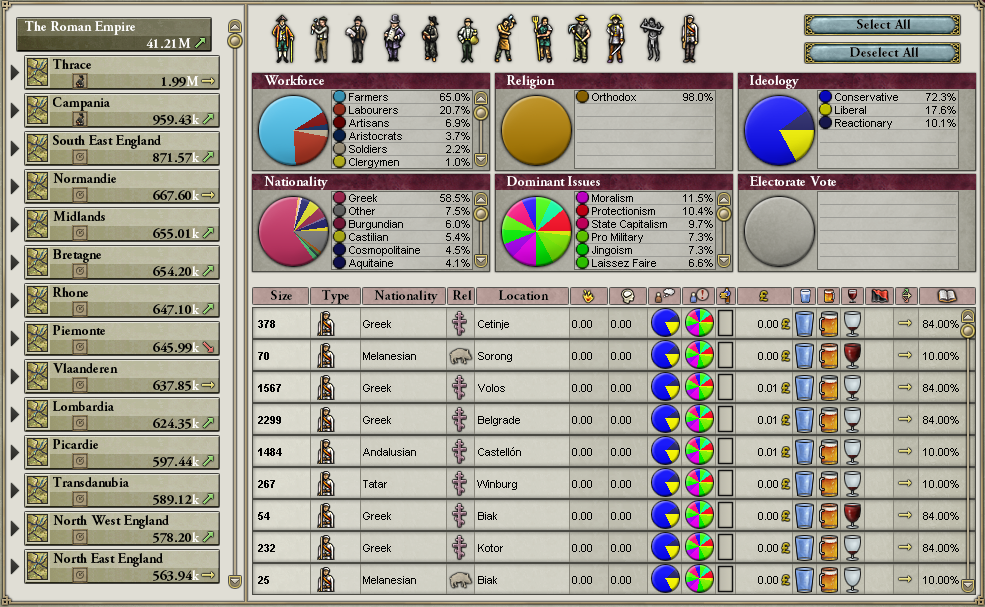 We adjusted the budget, setting the nominal tax rates to 100% (effective tax rates were 37%). We used this money to fund various civil servants, the soldiers in the Legions, and to stockpile goods that the military would need. 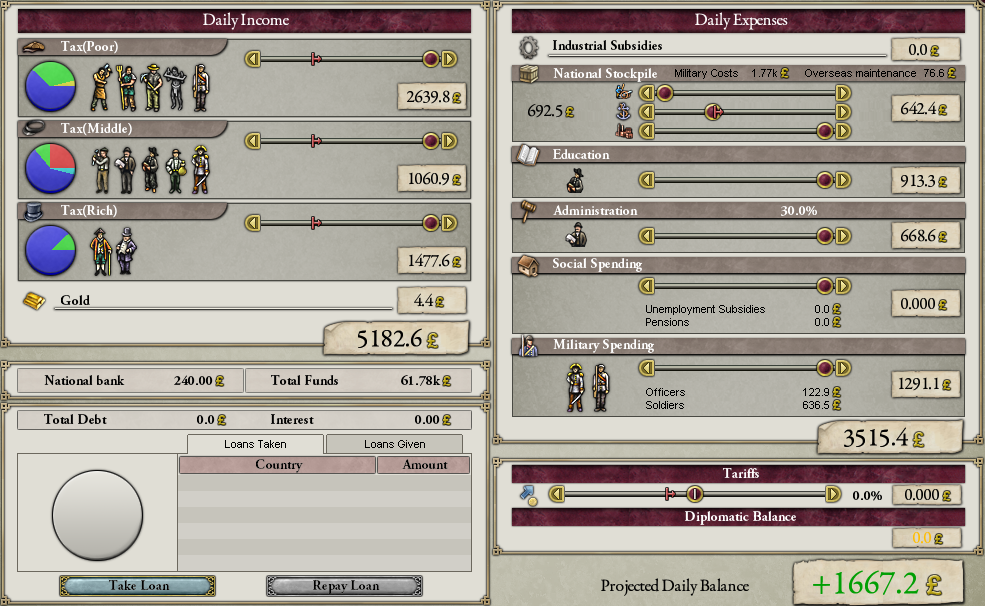 It was clear that our artisans could not supply all the needed goods, so We opened new factories to increase production: Artillery factories in Mainz and Franche-Comte (in addition to the existing one in Wales); Clipper shipyards in Bulgaria, Normandie, Attica, Suez, Alexandria, and Middle Egypt (in addition to the existing ones in Emelia and Loire). 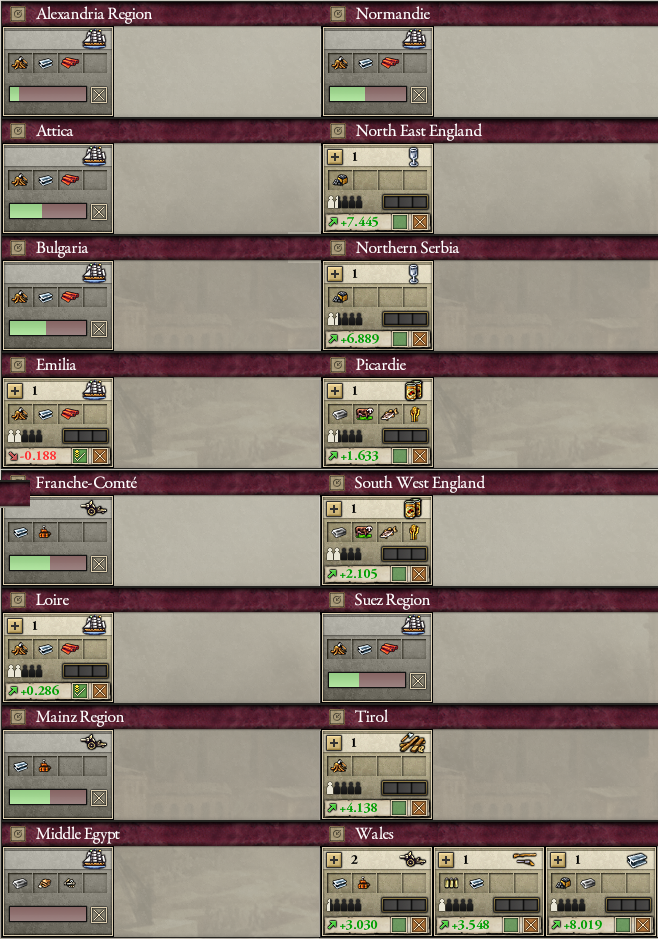 While stockpiling the goods to build these factories, We also began mass upgrades to our naval facilities throughout the Empire. 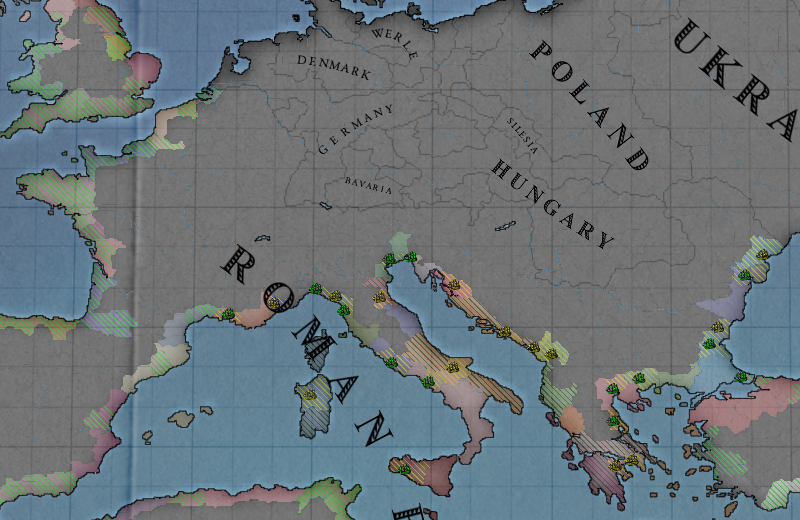 Meanwhile, many nations in central Europe began warring against each other. 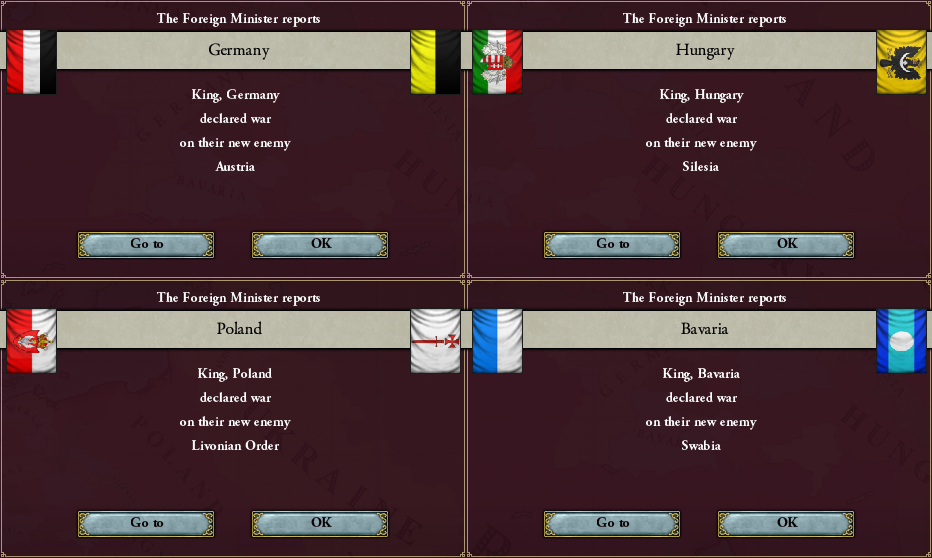 It was clear for the sake of stability that there should be a strong nation containing them all, so We formed an alliance with Germany in the hopes of their ascendance. 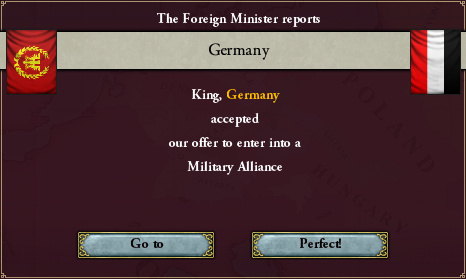 We allowed all nations that requested military access said access on the condition that they supplied their troops from their own stockpiles and not from the lands they marched through. Thus, the idea of troops being centrally supplied became normal.

Sadly, before We had had a chance to bring the Legions to strength, Russia declared war on Ukraine. We had been sending agents to influence Ukraine in our favor, and had nearly pulled them into our sphere of influence. So this invasion had to be resisted. We declared war on Russia in defense of Ukraine. Persia had sided with Russia in this war, but Germany was eager to flex their muscles and join us. 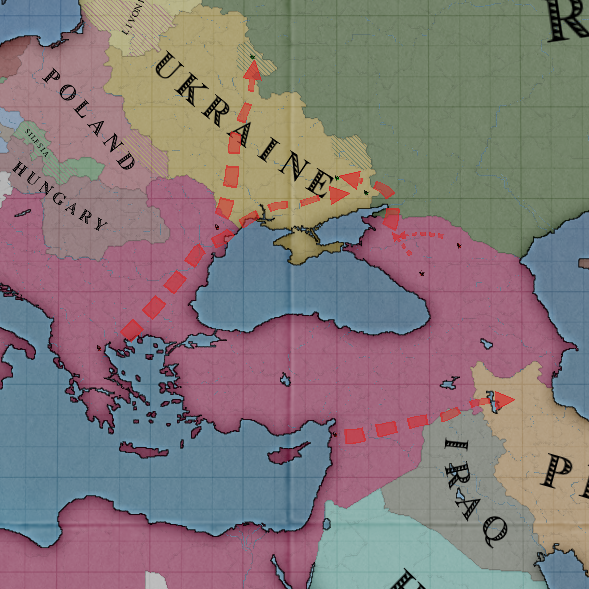 While the battles with Persia went to the Legions, the battles with Russia did not. IV. Legio, having marched from East Macedonia nearly to the Caucasus, saw victories, but it was not enough to turn the Russian tide. Even the Persian victories were not enough, as they simply sent more forces to occupy border provinces while I. Legio sought to stop other occupations. And when I. Legio sought a decisive battle against the main Persian force, they lost. 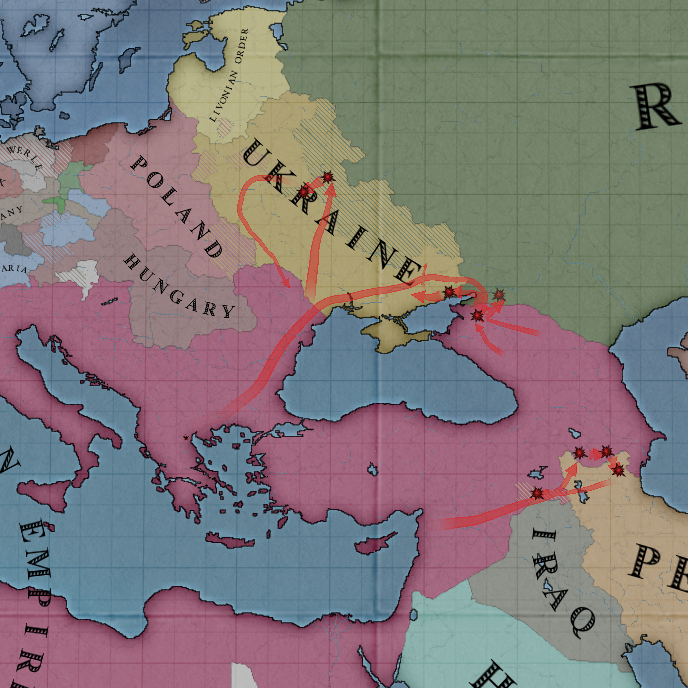 German troops in Persia began to undo some of Persia’s gains, but it was too little, too late. It was clear that the war was unwinnable and that further fighting would only lessen our chances to undo the damage at a later date. And so We surrendered to Russia, allowing them to annex Ukraine. 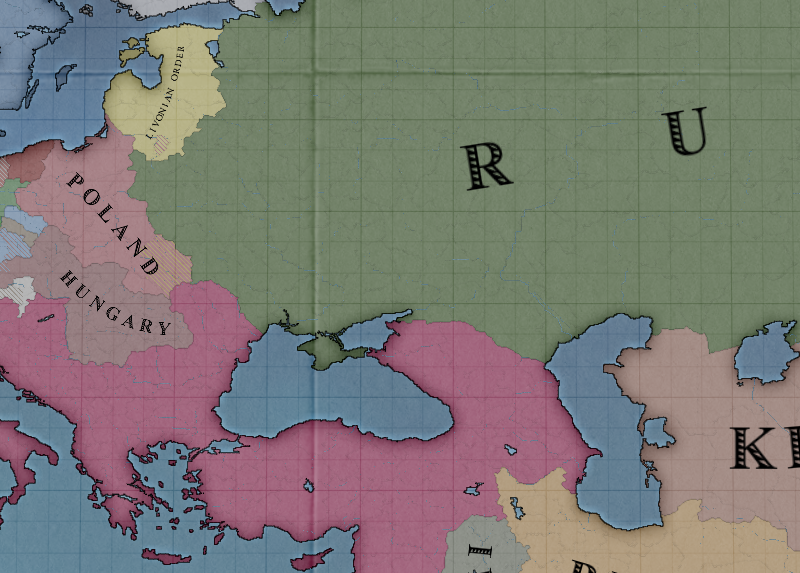 We are displeased that this was necessary. We are certain that given more time, the Legions could have been better supplied and brought to their full numbers. This will still be done, though it may take two or three years. As well, the Legions have a shortage of skilled generals. This is slowly being remedied, but will also take time. This kind of disaster will not be allowed to happen again.

Other information I should share include that during the war with Russia, both Bavaria and Hungary had succeeded in their wars, becoming ever stronger regional powers.

Bavaria immediately followed this with a war on Nurnburg, and Hungary declared war on Bavaria. 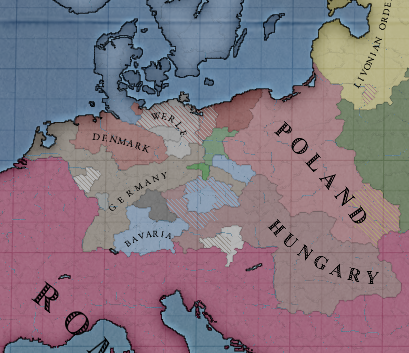 And on the colonial front, We found nearly all of Africa to be too disorganized and dangerous to gain control. The one exception was the Transvaal, which we colonized. 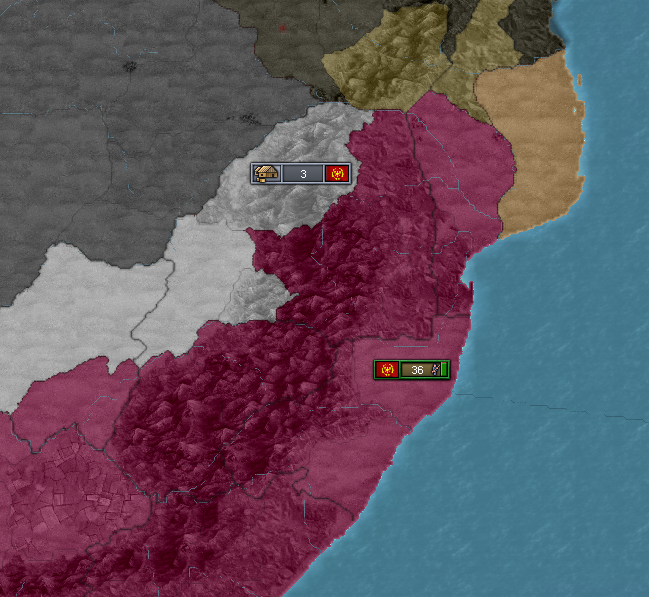 Further African colonies will be encouraged in the future, as the existing ones are proving to have vast natural resources. 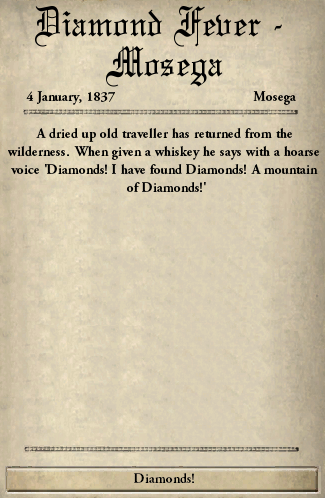 The outcome of the Russo-Ukraine War is most unfortunate. Not only have we lost an important buffer, but the Russians now have access to the Black Sea. We should take efforts to minimize further Russian expansion, perhaps by ensuring the survival of Poland or the Livonian Order. I am certain that under Your careful guidance, Empress, the Empire will be ready for any threat presented by Russia.

We must find friendship with the Germans, Livonians and Polish – it is the only way to stop the Russians!

Our loss of ukrainian buffer zone forces us to act immediately. I’m suggesting that we should start investing our resources to bring Poland in our Sphere of Influence, maybe even help them with expansion into Livonian Order, as they are already at war. I suggest abandoning Livonian Order as potential ally, as Poland and Livonian Order are hostile towards each other. Not mentioning that with Poland we can cover entire border between Europe and Russia, wchich we can’t do with Livonian Order. Also, in possible future conflicts with Russia we should press our claims to govern all Black Sea ports directly, rather than forcing Russia to grant independence to Ukraine with all its ports.

The loss of the Ukrainian borderlands is a devastation to both our overall political influence in Europe and to our control of trade in the Black Sea. As has been stated by other senators we should look to prop up another, more powerful nation as a new borderland. If we are to expect the Russians to perform further invasions soon, then an immediate resolution would be Poland. But if we’re in for a long con, then I’d say we should prop up the Germans and aid them in any ways possible. Besides, we already have an alliance with them.

Glorious Empress, our defeat against the Russian barbarians only came from our long years of waiting. Soon we will crush those who oppose us! The best way to show this renewed state of affairs to the Barbarians is to seize all ports along the Pont-Euxin coast. Thus you would do more than the great emperors of old did! The Mediterranean may have been a Roman lake but the Pont-Euxin was never fully pacified. You would protect your people and carve your name into history! But we should contact other Barbarians to use them as a shield against the Asiatic legions. Surely one Roman life is worth a Polish legion?

Already the lenient ways of the Senate allow sedition and corruption to seep through our society.

Whilst the Emperor is busy appeasing the fat cat reactionaries of the Senate, we continue to waste the Legions in the wastelands of Russia. Meanwhile our true enemy in Scotland remains free and must be brought to heel.

Alliances with Germany and Poland will secure our Northen and Eastern borders, whilst we make the Scots bow.

I disagree Στήβεν Γκρέυ. Those Slavic Barbarians have just seized an important buffer, a buffer we invested heavily in I might add. While the Scots are our traditional enemies these are not traditional times, we have a new enemy now in Russia. It is a monster the Emperor has birthed and we must put down! That is why I think we should instead turn our attention East and subjugate the Russian’s however costly that might be. I also will take this time to promote an invasion of Germanium. While the First Empire was unable to tame the barbarians just across the Rhine I have a belief that we can, we have defeated them in the 15 years war, and the many wars before, so lets do it again. Restore Roman Rule to Germanium!

I also disagree, Senator Nkréy. The Sko̱tsézoi are of no threat to Mégas Ró̱mi. Instead, I counsel that, with the loss of Ukraine to the people of Ro̱ssía, the Basilissa’s armies should move against the people of Oungaría and incorporate that state fully within our own borders, rather than perpetually outside.

Senator Nkréy, you must agree that, compared to the Russians, the Gaels do not pose a threat. The Ukraine was a important buffer to the Empire and the Russians have to be stopped, though I hope we can settle this affair diplomatically.

Senator Gallio, I do not believe that the invasion of Germania would be beneficial. It is in my belief that we should attempt to assist the Germans in uniting Germania, as such, gaining an ally who could assist us if the Russians decide to invade. If possible, I could make a map displaying my ideas of what the borders of Europa should be.

A united Germania would only endanger the Empire more than the Russians. Assuming we can unite them, and assuming they do not immediately implode, it has the potential to turn into another Russia. When the Germans do sour of us, as they will the damned barbarians, we will be fighting a behemoth that outmatches even us in both industry and military. So in conclusion while respect your views Septiadis, i feel they will do more harm than good.

Germans are a threat. No one should forget what happened centuries ago when they attacked the Western Empire and brought it to its end. Thus we can not risk Roman on the chance they might still ally us after we helped them. Continuous watching on the Rhine and Danube is the only way. Polish on the other hand could be used well against the Russian Hordes.

They are all barbarians, senator, but perhaps the Nemitzoi are the most perfidious of all. How long has it been since their sham western empire collapsed once again? I am not sure which I would sooner wish upon my enemies - the Rus or the Nemitzoi. Each would be a most uncomfortable bedfellow.

I agree with Angelos if I am understanding right. I-I mean we must destroy the Germans and Rus before they do the same to us. Empress Veronica, establish Regula Romanus in Europa!

Yes the Germans in the past were barbarians who greatly weakened the empire, but at the same time they provided much work as mercenaries, Foederati. And though there is a chance that the relationship can sour, but at the same time this would just be a mere case of history repeating itself, and in that case we know what to do. But I assure you all that not only are the Germans a civilized people, but also that they have been long civilized and even had an admiration for us shown with their pretender Holy Roman Empire. So it is an almost absolute fact that the Germans will be a staunch supporter of us.

How does the Empire expect to dismantle the Russians and maintain the neutrality of the other nations that have thrown of the guiding hand of Mégas Ró̱mi and those upstart colonies across the water with the infamy that we must accure to halt the Russian hordes? Even with the best efforts of our diplomats we will only be able to force them to release one or two potentially hostile nations, unless the Senate expects our Legions to fight the entire continent.

I in 2 quick ways we can deal blows to the heart of the Hun and the Gaels and force them to kneel before our might. However we must proceed with caution, let the Legions rest and recover theire strength and it is clear we need a more professional army to best our enemies and the Empire should put forward funds to research new ways of bringing this to our forces.

Senators, it is clear there is much disagreement on how to proceed. Nevertheless, it will take time before the legions are ready for any kind of fighting, let alone fighting other Great Powers. I will report to you when matters have changed. Thank you for your advice.

As well, these are some newspapers that the archivists thought significant: 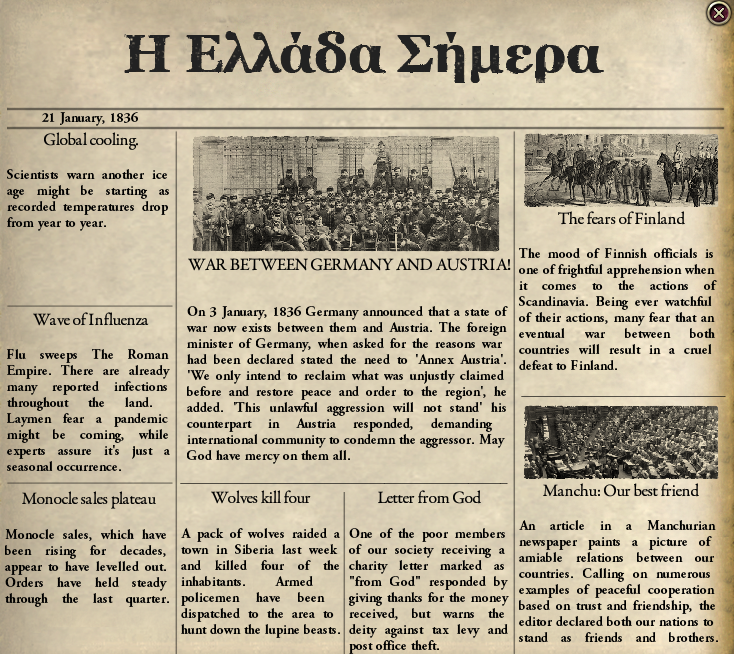 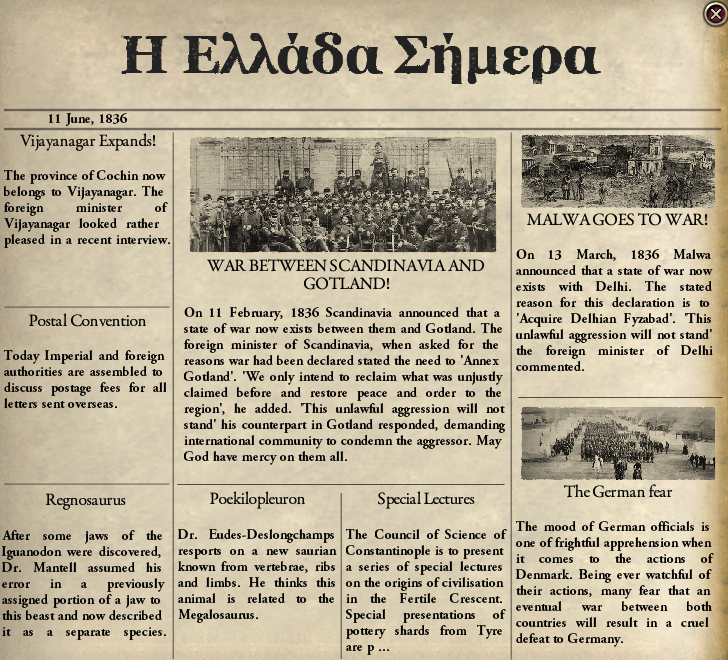 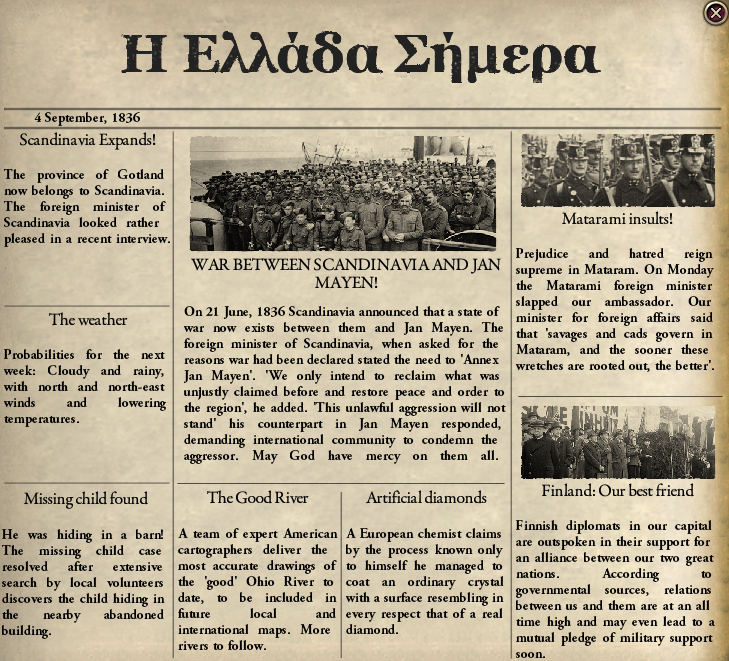 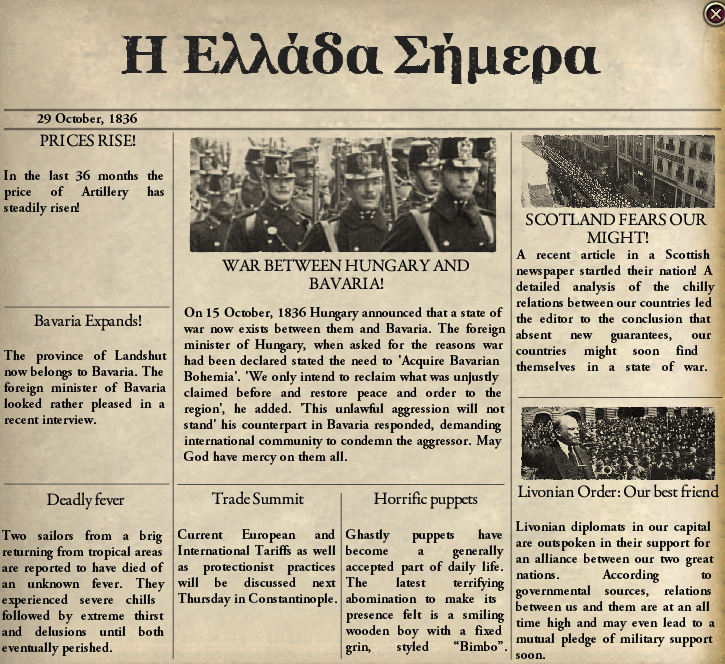 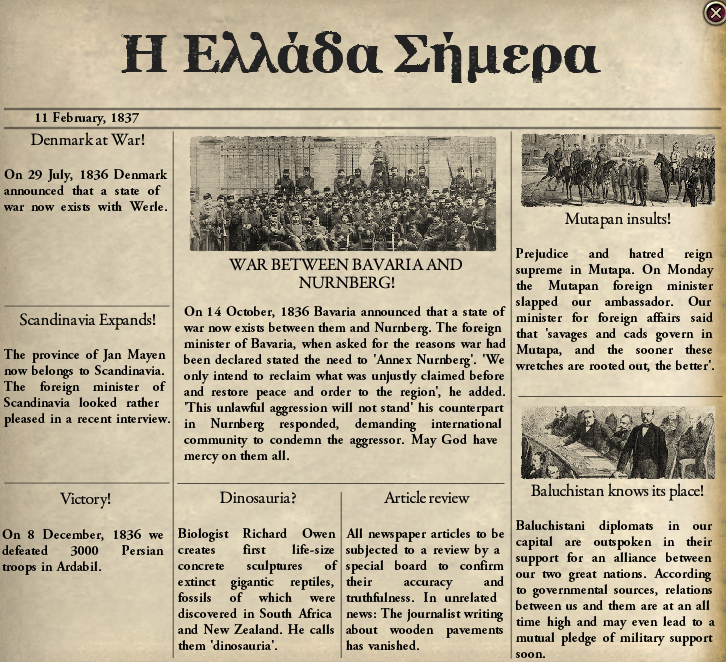