Senators, We thank you for how you honored Us during Our coronation ceremony.

As Empress, it is Our duty to protect the Empire, to make it strong, and to bring it glory. As Senators, it is your duty to advise Us in Our duty. And for you to do your duty, you must know the state of the Empire.

And so We give a state of the Empire address.

The Empire remains the preeminent nation in the world. None comes close to us in prestige, industry, or military might. 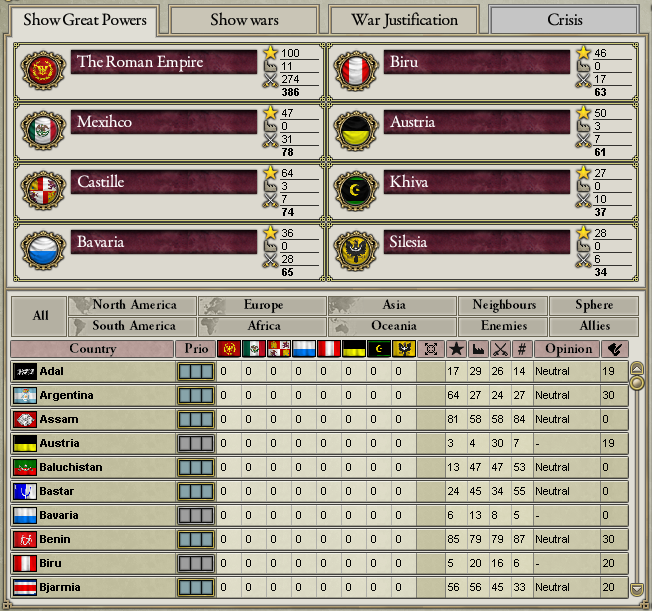 But our withdrawal from world affairs these last years has lessened our diplomatic influence. Our vassals are independent. Our allies gone their own way. But also, our enemies have lost their fear of us. Diplomatically, we are a blank slate. 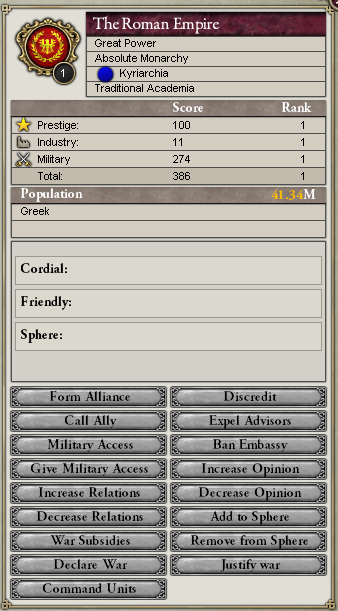 Militarily, we are quite strong. We have fifteen Legions, two fleets of Man’O’Wars, one fleet of Frigates, and numerous transports. But the reality is not as good as it sounds. I have reports that my predecessors developed an advanced system of foraging that allowed the Legions to march in grand numbers without fearing attrition. And yet the reality of this is nowhere to be seen. Most of the Legions have been forced to split into smaller groups to avoid attrition. With supplies from Imperial Storehouses, this might be somewhat averted, but spoilage and disease might still take their toll. The Legions are also depleted from years of neglect. 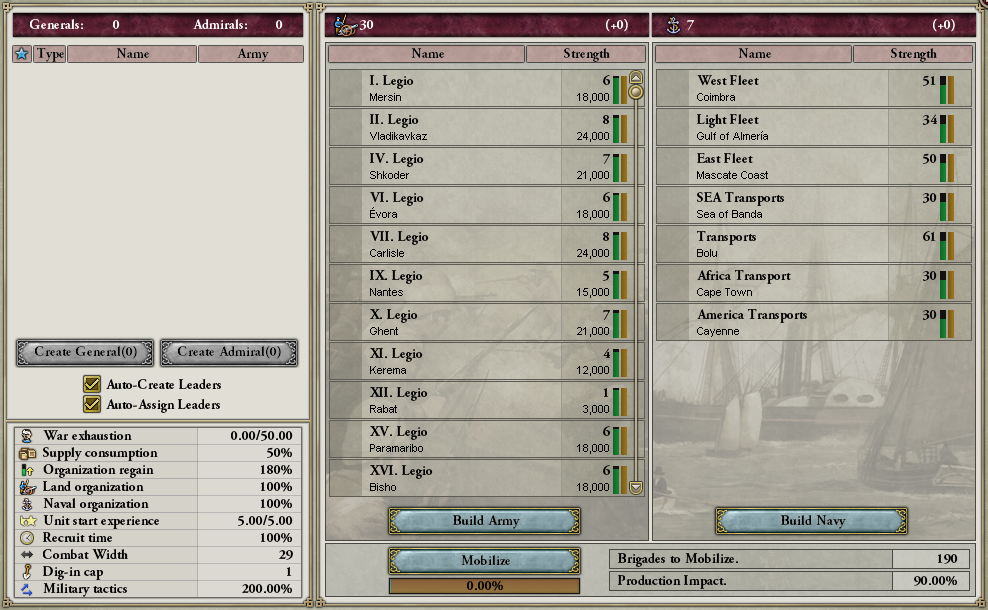 Unfortunately, it will be difficult to replenish the Legions, as we are unequipped to supply them even at their current state. 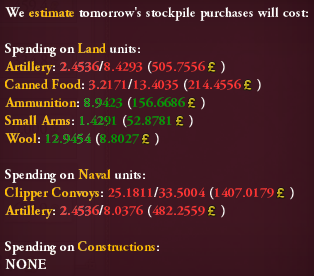 For that matter, while we have large cash reserves, our budget is strongly negative. Although the clerks tell me these are predictions based on old records, and it may prove different in very little time. 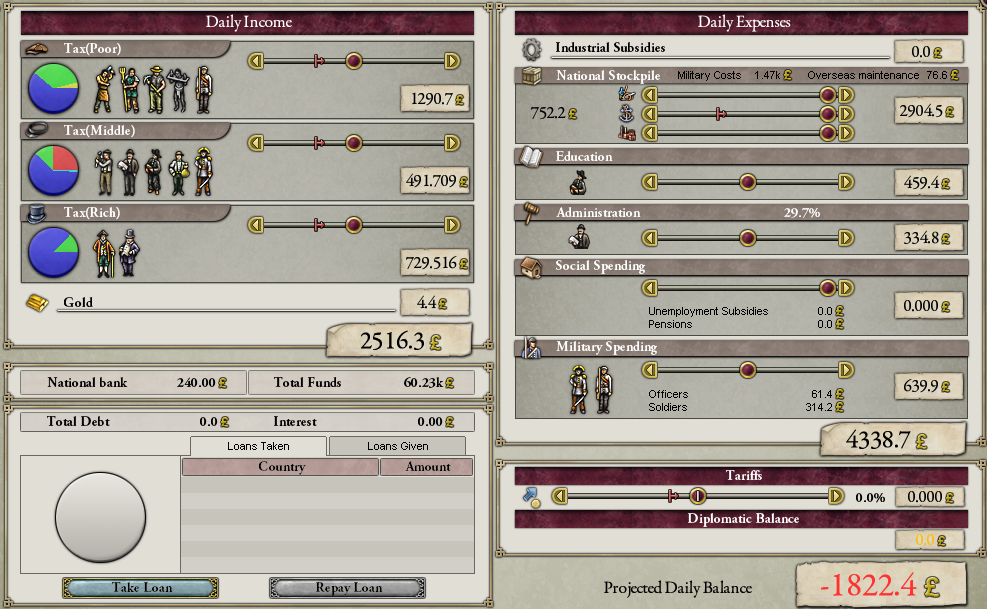 We have several centers of industry, though not much of our population works in these centers. 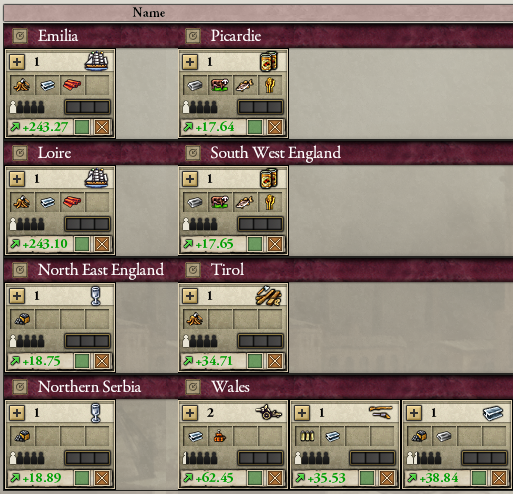 Our technology is unmatched throughout the world. 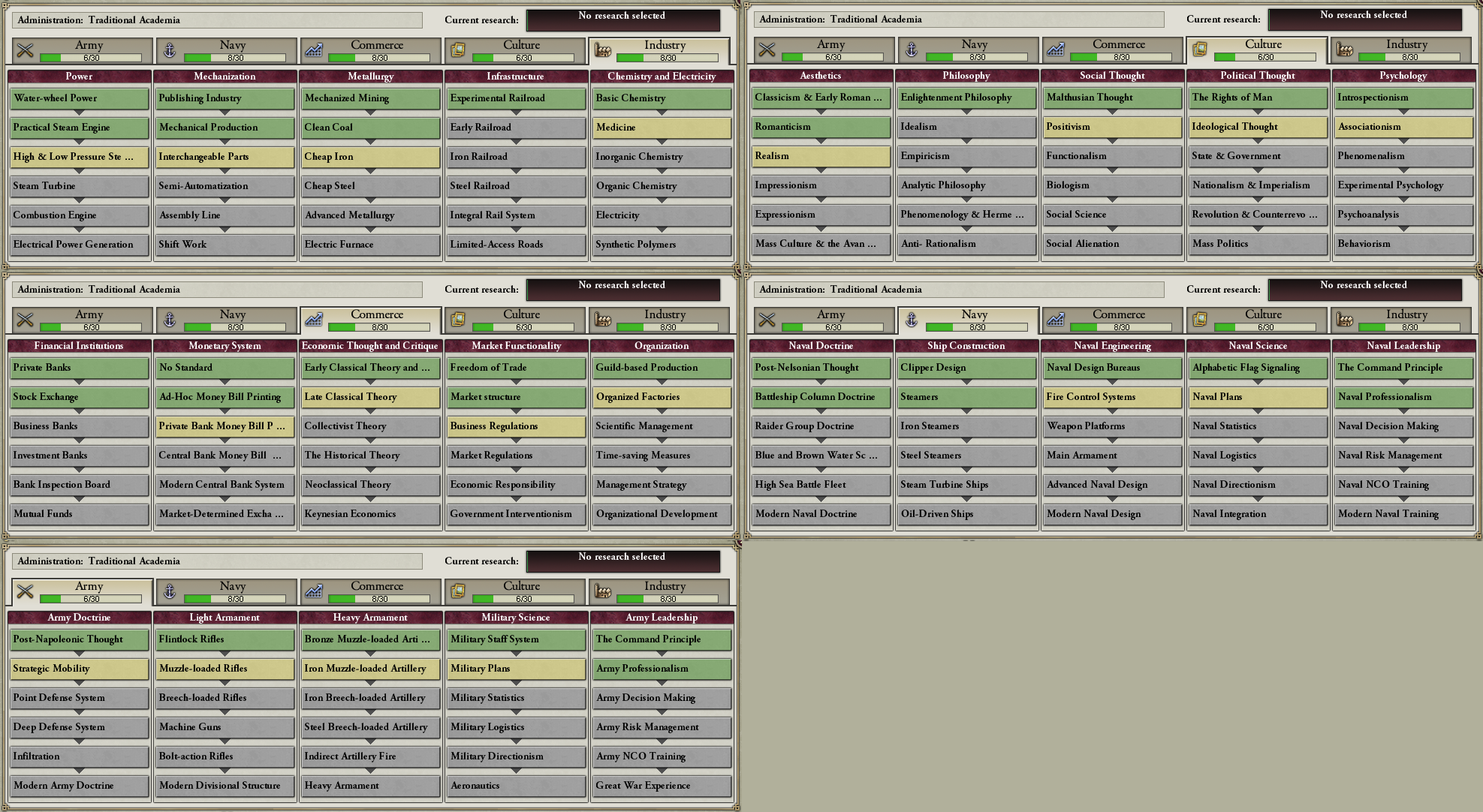 Our population is mostly Greek-speaking, though quite diverse. Most of the non-Greeks are in the west. Castilians, Basque, and Andalusians in Iberia; Bretons, Cosmpolitane French, Aquitaine French, and Burgundians in Gaul; Italians in the Po valley; Flemish and Walloons in the Low Country; Welsh, Scottish, and a few English in Britannia; Berbers scattered throughout North Africa; Azerbaijani in Azerbaijan; and Jews everywhere, with a strong presence in Palestine.

Speaking of Africa: it seems that between the slave trade, our conquest, the conversions, and the political reorganizations, nearly all political organization has completely collapsed in west Africa. A few nations have started small trading posts, but we have certainly lost our grip on the region. 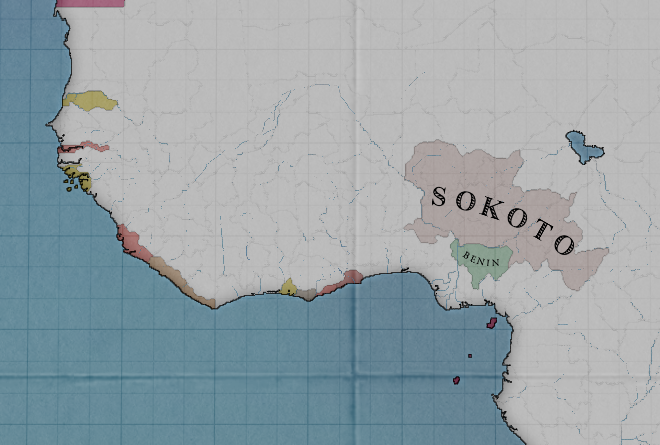 The world’s borders have not changed much. There are current maps that will be made available to all Senators.

And these broadsheets Our clerks have been distributing give the estimated political concerns of the Senators we have appointed.

Now, I shall hear your concerns and recommendations.

Your Imperial Majesty, you come to the throne at a time when the Empire has stagnated for over a decade. If we wish to ensure our dominance of the world, we must spread our influence far and wide. I suggest that we attempt to bring the other nations of Europe back under our fold through trade and diplomacy ((get as many of the minor powers in our sphere as possible)). We should also attempt to re-establish our former positions in Africa if possible ((not sure if portions of Africa can be colonized at this point, but it looks so bare)). Our military most likely requires reorganization, but I am not as experienced in the gritty details of our forces. Industrialization has also become a powerful force and perhaps we should consider opening factories to produce wondrous goods for our Empire. Our focus should be closer to home until the Empire has adjusted to the rule of Your Illustrious Person. Of course, Your word is law, so I will support whatever efforts You prefer.

“Noble Basilissa, I understand that the rebellious people of Skotia and Irlandia have united against your enlightened rule, yet they still control a sliver of southeastern Anglia. I ask that the mighty armies of Rhomaion drive back the Skotsezoi past the great wall of Basileus Adrianou5 and retake southern Anglia and Oualia, once and for all!”

Senator Favero, We thank you for your inputs. We will look to build our industry, rebuild the Legions, and regain the Empire’s influence in Europe. We fear that Africa is still too chaotic for us to regain control, but We shall seek any opportunities to do so.

Senator Angelos, it seems Our address was unclear. Indeed, the Empire holds all the lands south of Basileus Adrianou’s wall. The former drawing stead was showing the regions where our subjects primarily speak Welsh, English, or other non-Greek tongues. A large map of the Empire is to be installed in the Senate Hall later today, and smaller maps have been printed for all Senators and will be delivered shortly.
(( If you right-click on the map, you can open it in a new tab, where it’s more clear. ))

If no other Senators have concerns at this time, we shall end this address to the Senate.