While the Alexandrian Renaissance slowed in it’s inattentiveness, it was still rapid. The legions took advantage of advancements in explosives to begin retaining units of grenadiers. And the imperial cavalry mastered the art of mounted skirmishing with firearms.

Alexander quickly tired of peace, and made war on England while his other existing truces were valid. 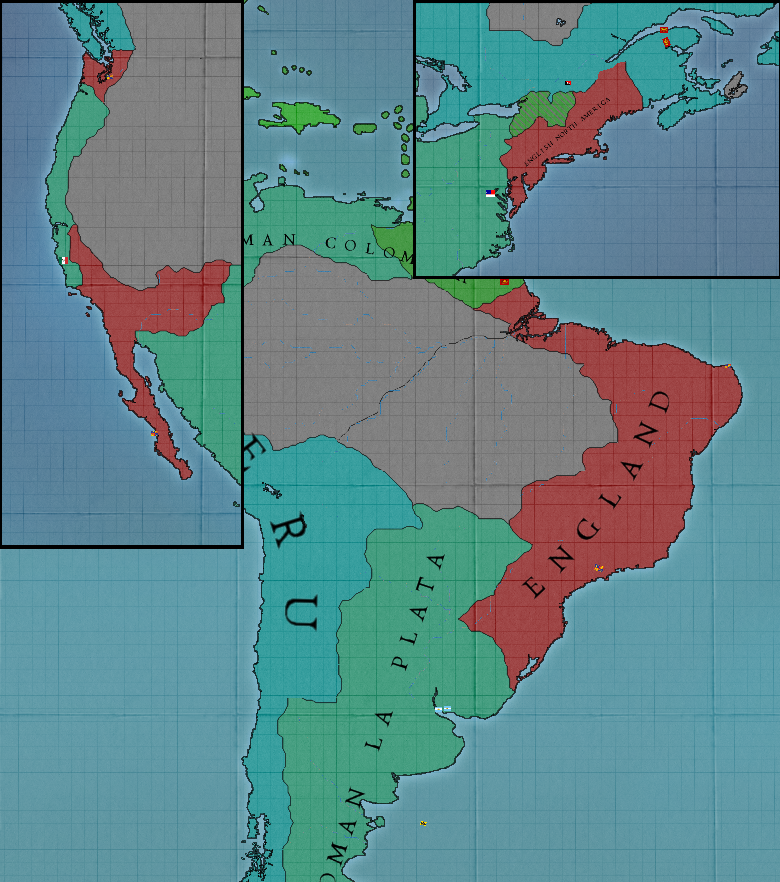 The Legions used their experiences in fighting this war to again adjust their tactics, not even waiting for the war to be over (drilling in the new square formations no doubt alleviated the tedium of sieges). 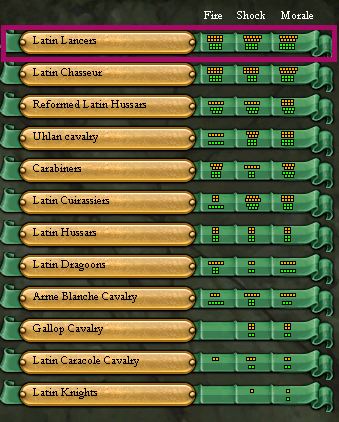 After quite some time besieging various English fortresses and hunting down English armies, peace was made, England giving up lands in the Pacific Northwest and Africa, as well as freeing New England. 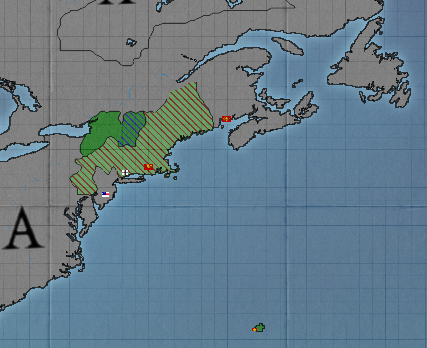 But it was a short-lived peace, Alexander focusing again on Africa. But this time, the rulers of most of India joined in Mali’s defense. 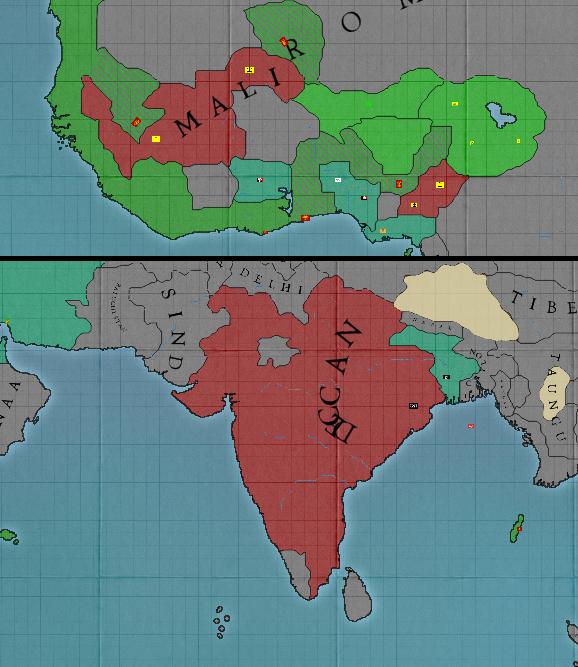 The difficulty of keeping the Legions supplied in Africa and India led to purposeful efforts in improving the ability to forage locally. Simultaneously, a grand prize was announced for methods of truly preserving food for long times. 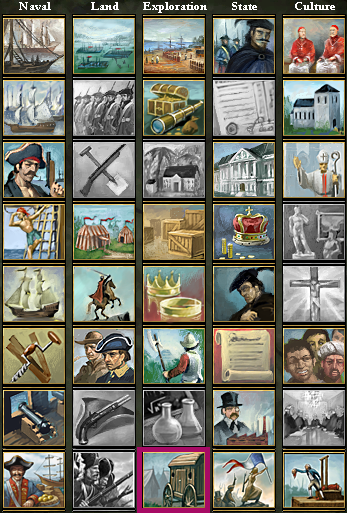 Mali had built truly impressive defenses, so it took five years to bring them to heel. Most of their outlying territories were taken. 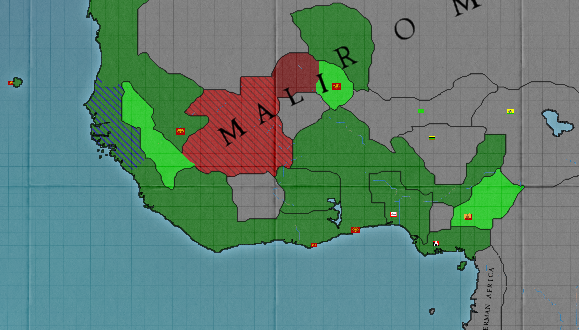 Once that was done, Deccan was quick to agree to a harsh peace: they freed almost half their lands to local control. The locals given control were favorably those who were not Muslims (there still being a great fear of Muslims in the Empire, even three centuries after the Timurids had ceased to be a threat). 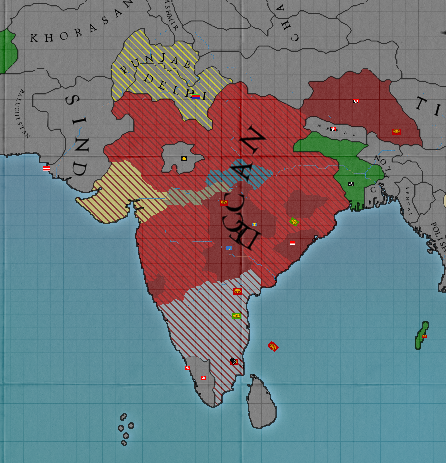 Even as the legions marched home, Alexander declared war on Novgorod-Seversk, annoyed at the existence of minor states between Russia and Ukraine. However, Russia did not seem to see that this would be a war in their favor, and joined the defense of the little nation.

Finland escaped from the war only giving up claims to territories they did not hold. Novgorod-Severesk was absorbed (and then sold to Russia). Russia gave Kola and Karelia to Scandinavia in a separate peace. 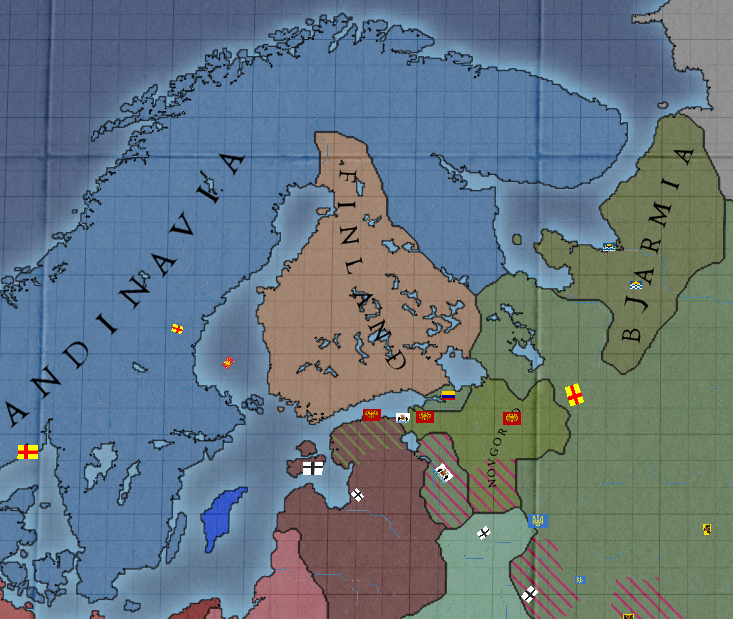 Before the war was done, Adal moved to conquer the last province held by Swahili. Ethiopia came to Swahili’s defense, and the Empire immediately supported Ethiopia. 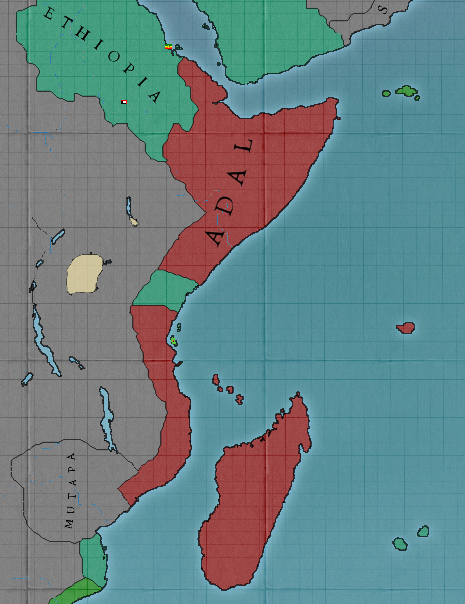 During this war, the navies of the Empire insisted on a little of the support that the Legions received. A naval provision system was therefore developed. 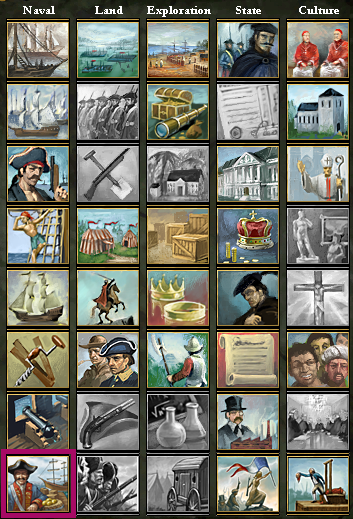 Eventually, Novgorod was annexed (also later to be sold to Russia). Once this was done, Russia agreed to give up their claims in Eastern Europe. 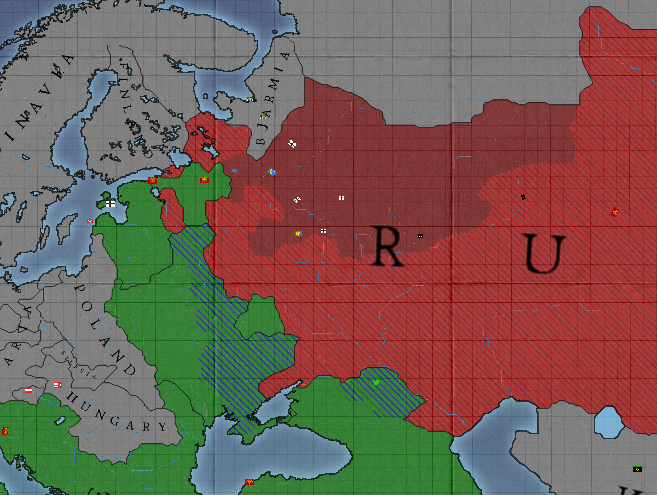 Before the war with Adal had ended, Alexander declared war on England, hoping to remove them from any lands but their Brazilian ones. 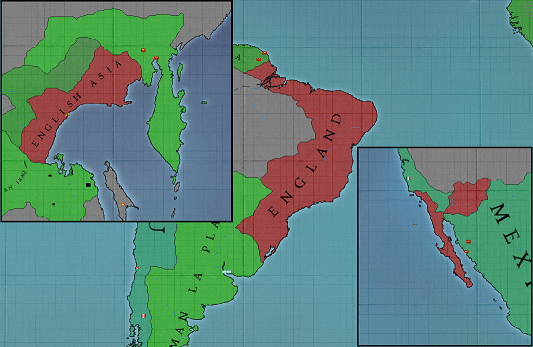 Shortly after this one of Adal’s provinces that had been occupied by the legions defected to the Empire. Adal soon after agreed to peace, giving up any claims to lands ruled by the Empire. 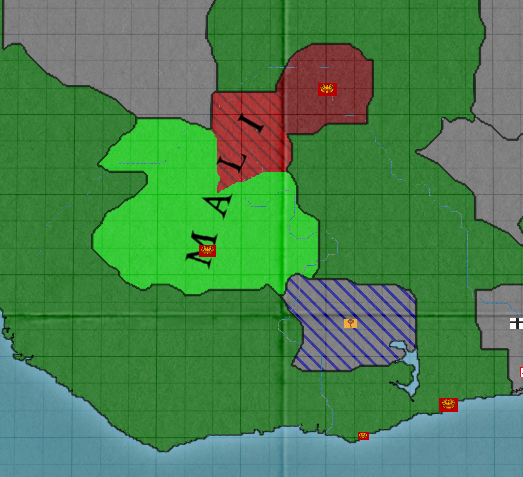 While waiting for Gizhiga to fall to XI. Legio, the Empire was dragged into yet more wars: a Scandinavian adventure in India, and to defend Gotland against Denmark.

In 1808, the last English fortresses fell (and their navy made a last-ditch strike near Gibraltar, again smashing the fleet protecting the Mediterranean). England was forced to give up all lands outside of South America, and gave up claims on all lands they had previously lost. They were now just a regional power. 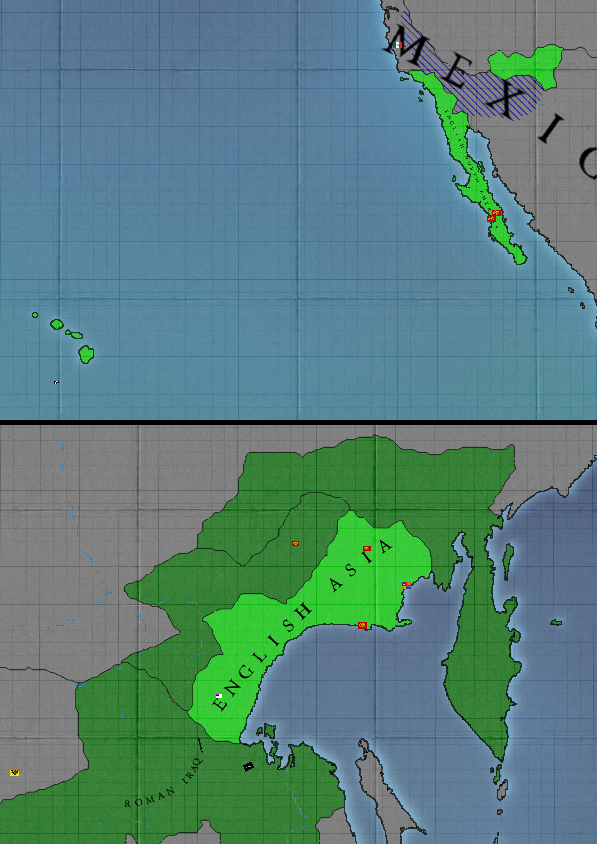 When Denmark surrendered in 1810, they were forced to free Werle and Holstein, while Deccan merely gave up some claims. 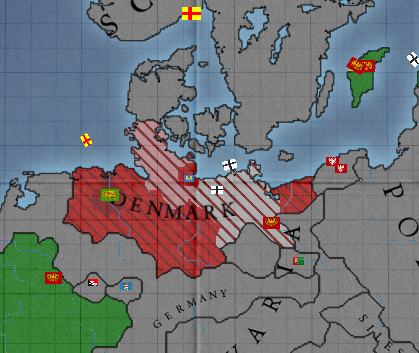 After only a year, Alexander again demonstrated his restlessness when he declared war on Bavaria. Peru, Baden, and Sanaa came to their defense. While IV. Legio lost the opening battle of the war, it was quite successful in harming the Bavarian ability to make war.

Baden was completely annexed (and then swiftly placed under German control). Sanaa gave up all of their lands away from their home territory and gave up claims to provinces within Arabia. 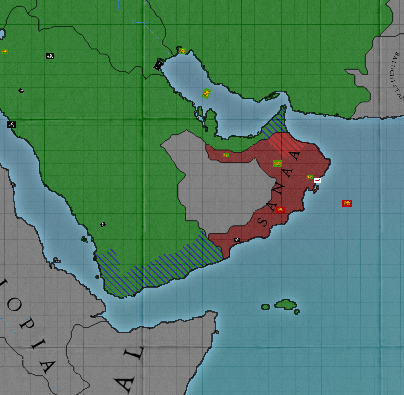 Peru gave up some claims in La Plata. Bavaria was forced to release several states. 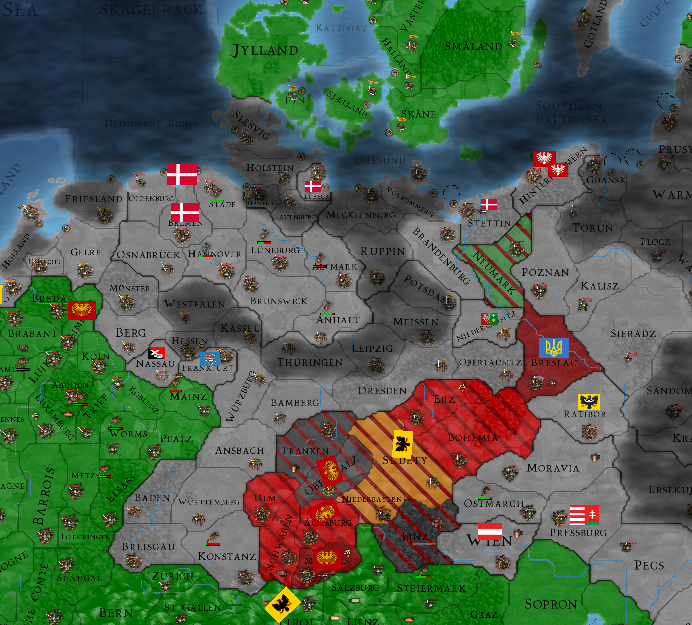 In June of 1815, Alexander declared war on Mali, bringing to its end the last of the slave selling states (it was annexed in September of 1818). But to Alexander’s dismay, there were still slaves being sold. While the Empire had been focused on what they thought was the source of slaves in West Africa, they were really being sold by Kongo. Alexander demanded the annexation of Kongo, and the trade was fully ended by October of 1818.

In December of 1820, Alexander finally died, seemingly of old age (though later events throw the official diagnosis into doubt). Konstantios XIII rose to the throne. 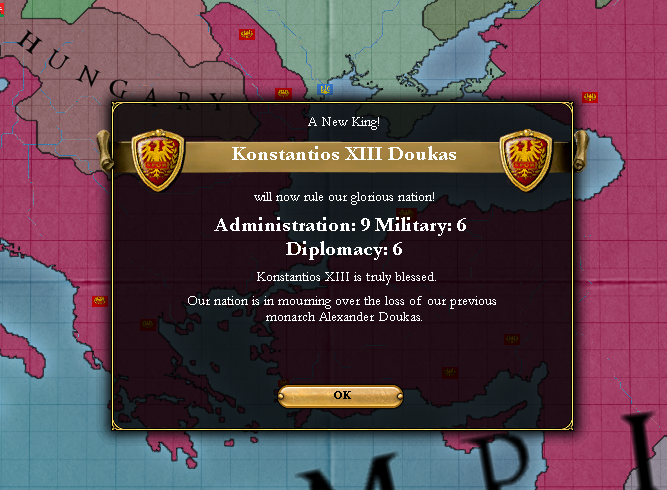 He appointed as heir his brother Andronikos—later known as Andronkios the mad—thus setting into effect the events of the 19th century.

And that’s it for EU3! I’ll do some summary posts while I work on the conversion. Is there anything you’d like to see mentioned or addressed?