By 1750, the Empire had finally reclaimed all of its historical holdings. 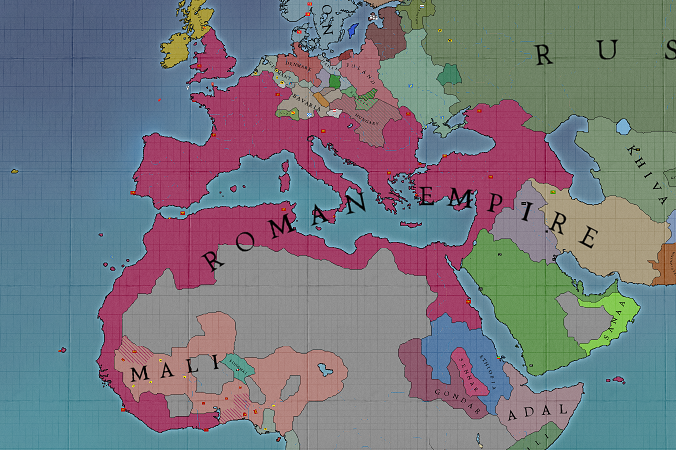 Eastern Europe had mostly stabilized, though Bjarmia, Novgorod, and Novgorod-Sversk had not yet succumbed to Russian consolidation. 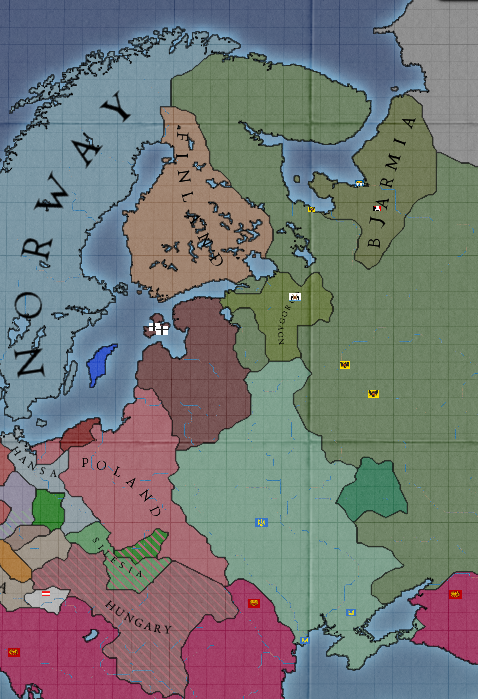 In central Europe, Germany had begun the first of its wars of consolidation. 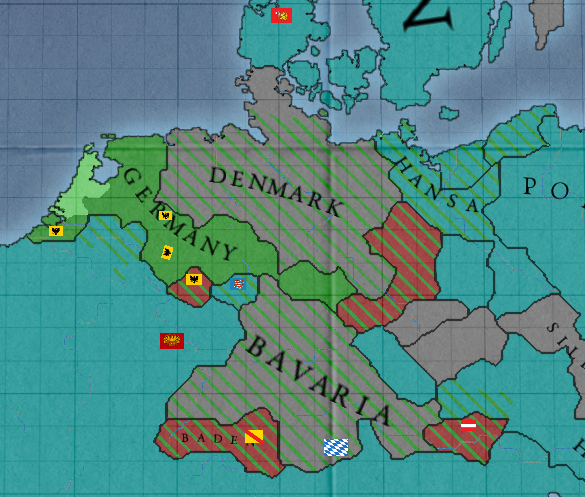 The only change of note in South America was a concession of land from Peru to Russia in Russia’s war against Novgorod. 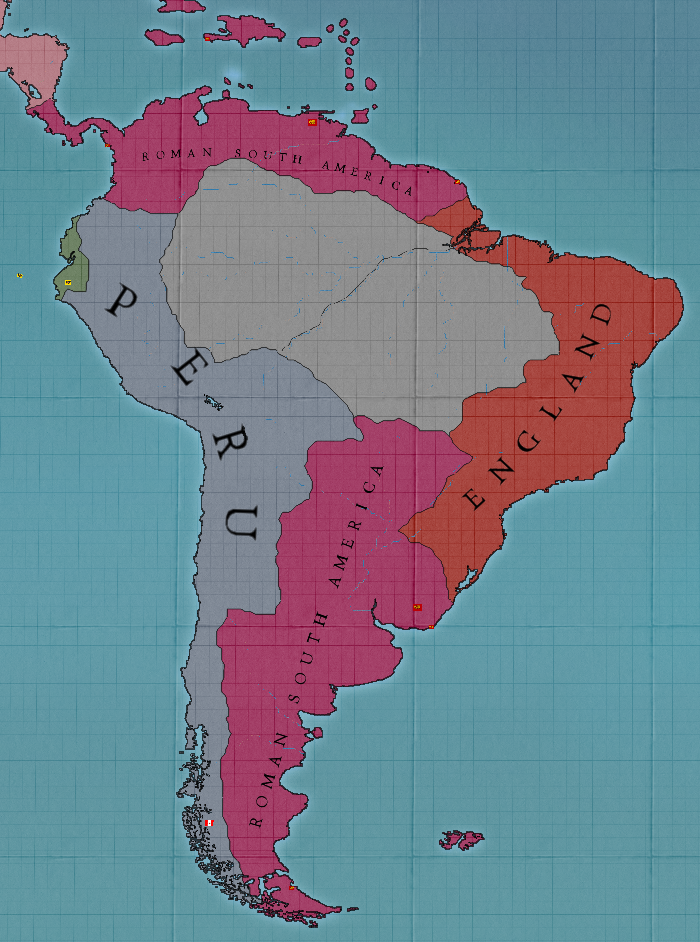 Eastern North America had changed significantly. The Huron had formed Canada and consolidated the north. The Cherokee had formed the United States of America and begun working to consolidate the plains. A few potential territorial disputes had been resolved by the Empire, with the lands under the temporary control of the Empire. 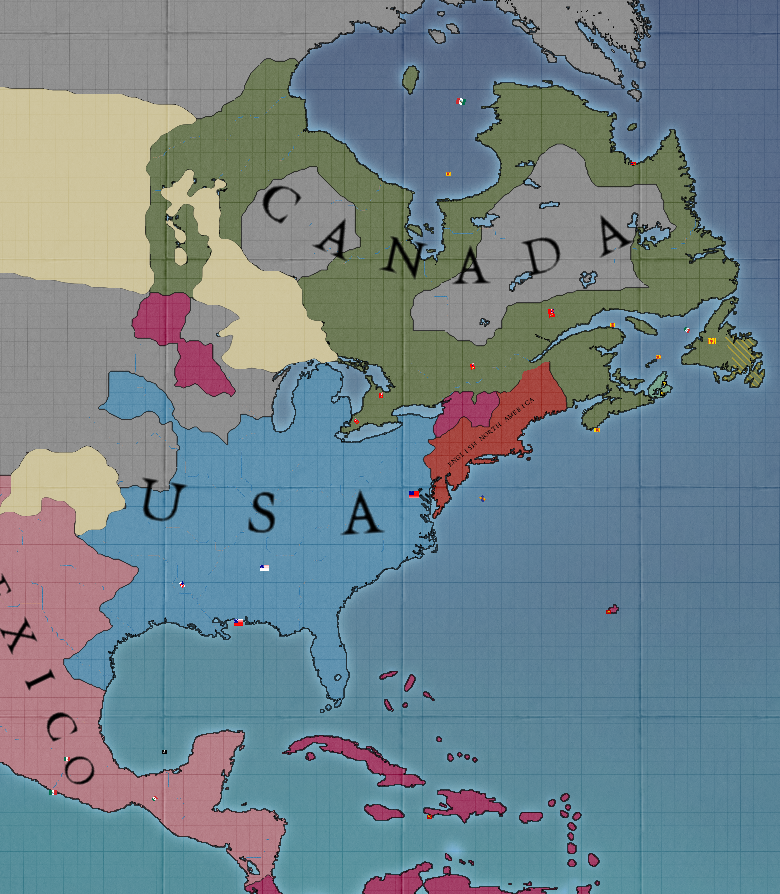 Western North America was a land of shifting claims, though few actual members of the claiming nations were actually present and control of the lands was nominal. 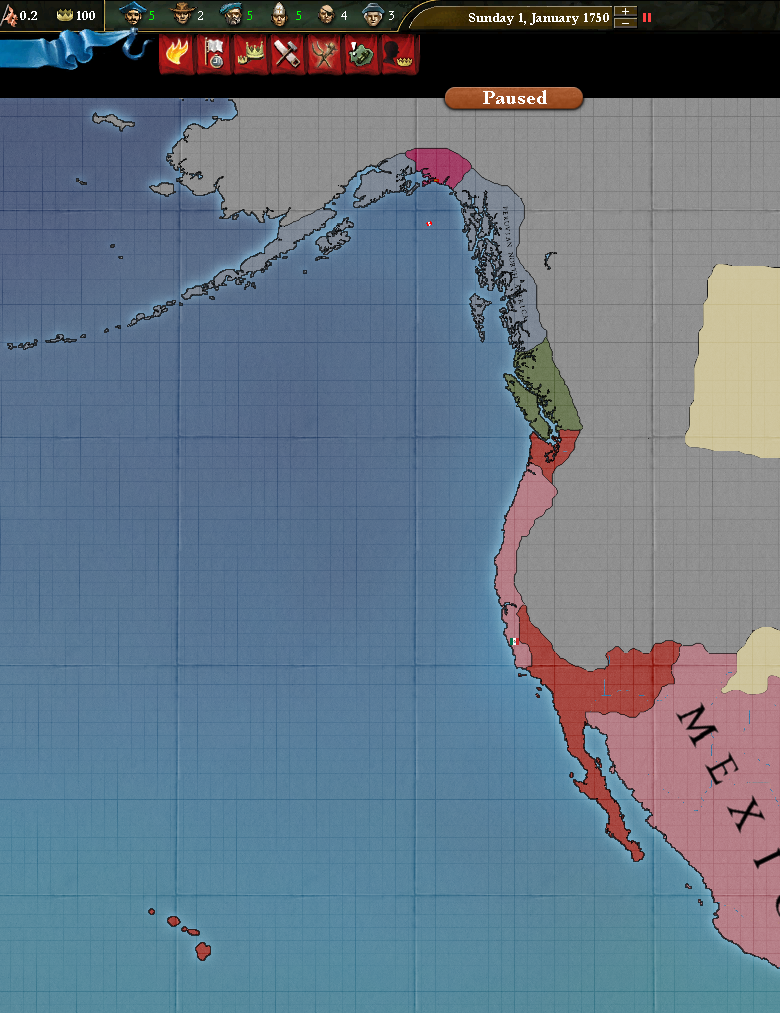 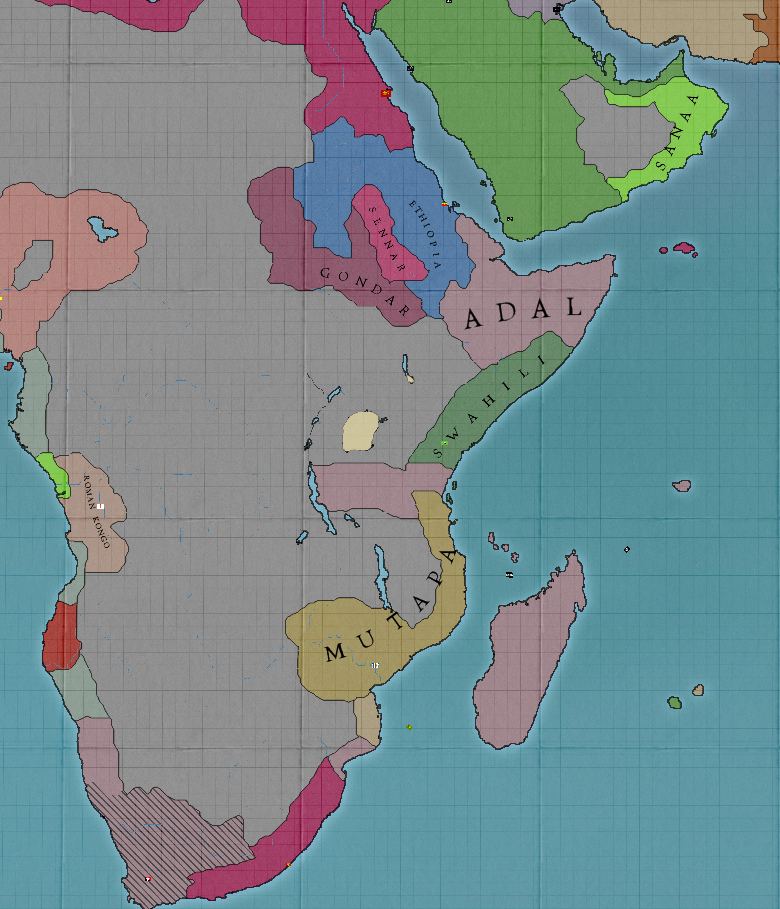 In western Africa, Konstantios had made war on Mali to stop the slave trade at its source. 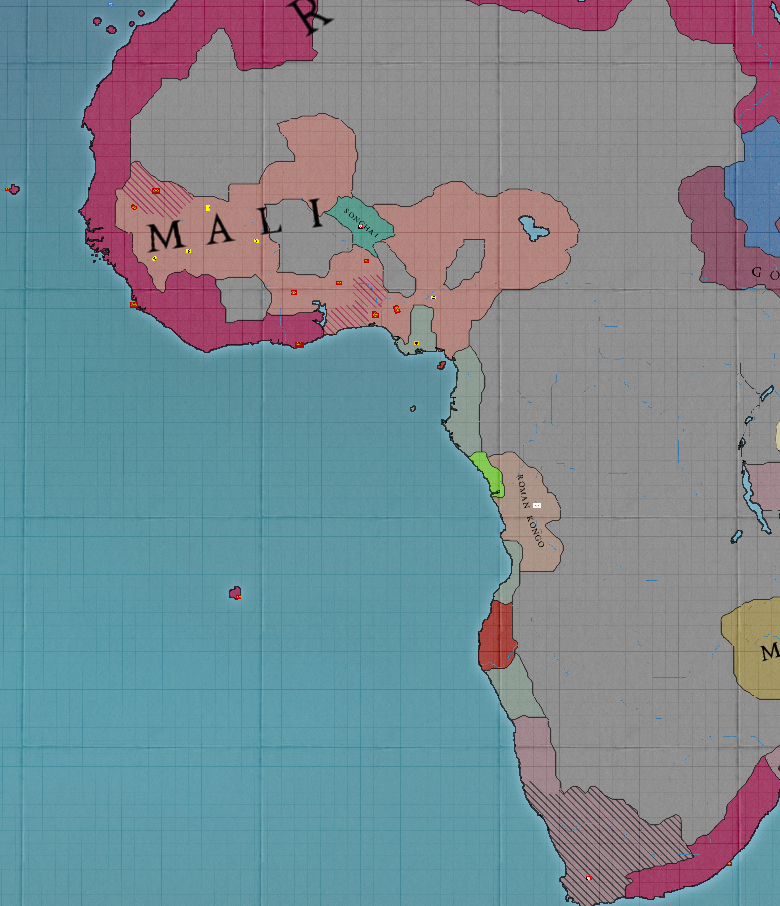 The settlement of Oceania had gone nearly as far as anyone considered worthwhile. 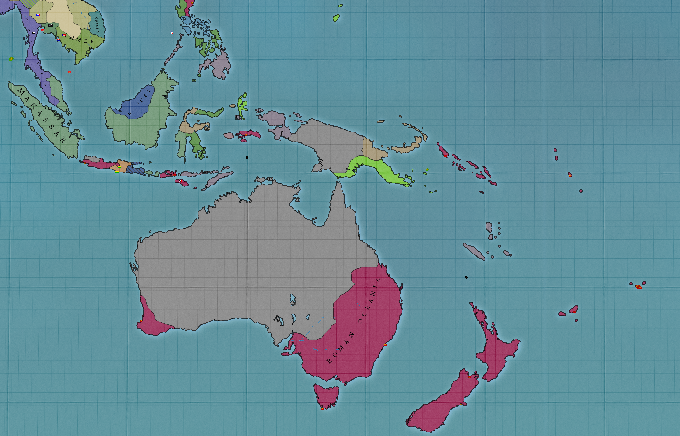 The Empire had advanced greatly in learning, with art and science flourishing throughout the Empire. Lonely Castile, holding only the Azores, had managed to import and apply nearly everything the Empire knew, though this was their only claim to any fame. 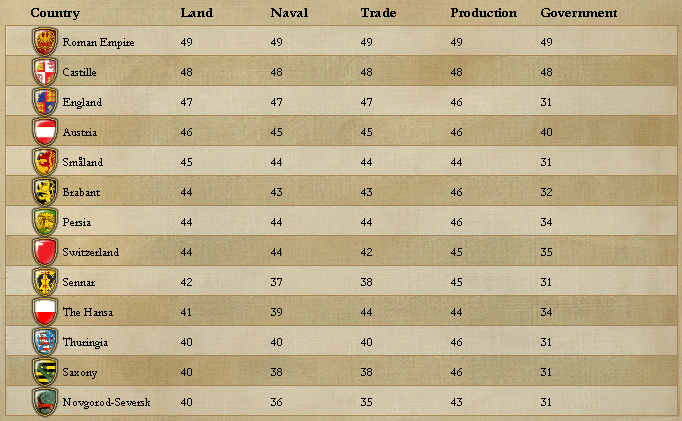 The Empire had the world’s largest army (by far). Russia had the next largest, and the rulers of almost all India followed after that. 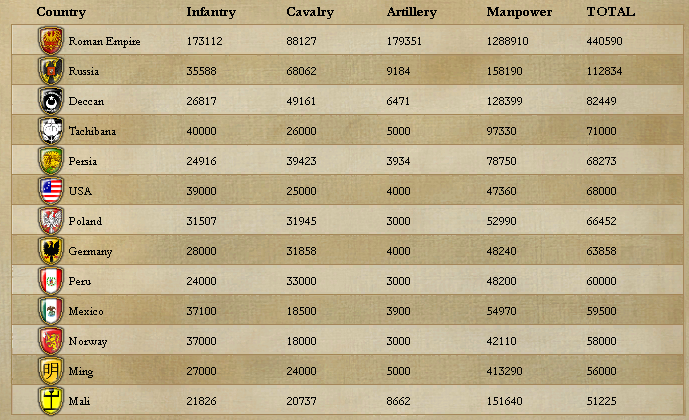 After the Empire, it was England and Peru that had the largest navies. 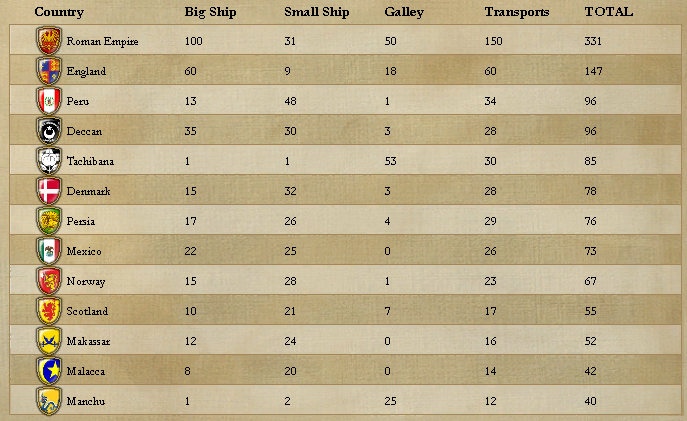 In the time span between 1700 and 1750, the Empire had extended yet more protection to the lower classes, though nearly everyone but the hereditary aristocrats had been shut out of the highest levels of influence and power. The merchants had given up direct influence in the government without too much fuss, as the Empire gave them more protection against outside traders. And the Imperial Corps of Engineers was proving ever useful to the Legions. 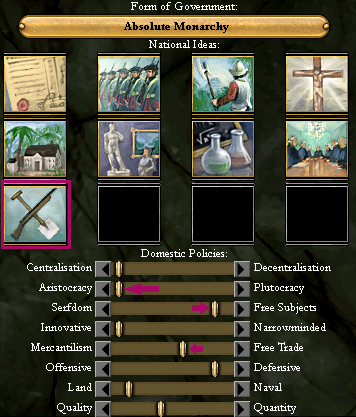 England, despite having been forced to abandon their homeland, had grown to be a power. The Kingdom was focused on their naval power, and on claiming as many colonies as they could. They controlled much of eastern South America, the New England region of North America, the North American south-west, and a strip of the Siberian coast. Their armies, while no match for the Legions, had proved well trained and equipped in the recent war, and their navy was the best in the world, giving even Konstantios pause. 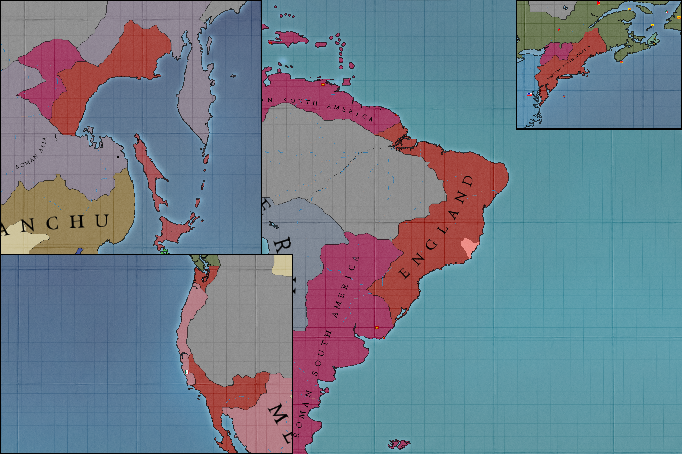 Muscowy had long been spreading across the steppes, aided by the Empire, which had not wanted to manage those lands itself. After proclaiming itself the union of all Russians, it had reclaimed most of the traditional Russian heartland. Militaristic and aristocratic, who knew where it would turn next? 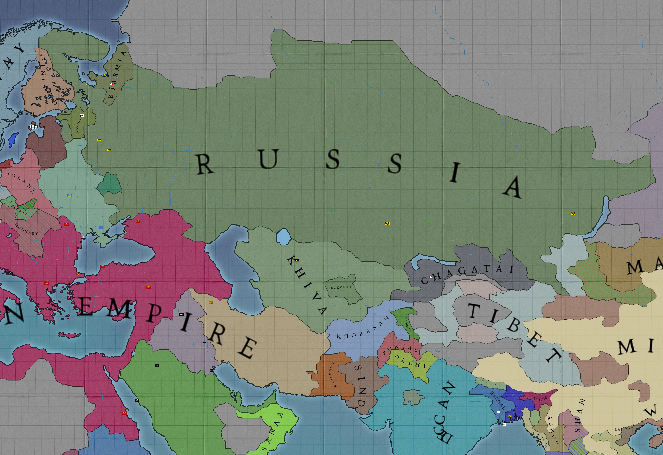