Landholders, businessmen, plantation owners of the Empire, I remind you of St. Paul’s letter to Philemon:

Paul, a prisoner of Christ Jesus, and Timothy our brother, To Philemon our dear friend and fellow worker—also to Apphia our sister and Archippus our fellow soldier—and to the church that meets in your home: Grace and peace to you from God our Father and the Lord Jesus Christ. I always thank my God as I remember you in my prayers, because I hear about your love for all his holy people and your faith in the Lord Jesus. I pray that your partnership with us in the faith may be effective in deepening your understanding of every good thing we share for the sake of Christ. Your love has given me great joy and encouragement, because you, brother, have refreshed the hearts of the Lord’s people. Therefore, although in Christ I could be bold and order you to do what you ought to do, yet I prefer to appeal to you on the basis of love. It is as none other than Paul—an old man and now also a prisoner of Christ Jesus—that I appeal to you for my son Onesimus, who became my son while I was in chains. Formerly he was useless to you, but now he has become useful both to you and to me. I am sending him—who is my very heart—back to you. I would have liked to keep him with me so that he could take your place in helping me while I am in chains for the gospel. But I did not want to do anything without your consent, so that any favor you do would not seem forced but would be voluntary. Perhaps the reason he was separated from you for a little while was that you might have him back forever—no longer as a slave, but better than a slave, as a dear brother. He is very dear to me but even dearer to you, both as a fellow man and as a brother in the Lord. So if you consider me a partner, welcome him as you would welcome me. If he has done you any wrong or owes you anything, charge it to me. I, Paul, am writing this with my own hand. I will pay it back—not to mention that you owe me your very self. I do wish, brother, that I may have some benefit from you in the Lord; refresh my heart in Christ. Confident of your obedience, I write to you, knowing that you will do even more than I ask. And one thing more: Prepare a guest room for me, because I hope to be restored to you in answer to your prayers. Epaphras, my fellow prisoner in Christ Jesus, sends you greetings. And so do Mark, Aristarchus, Demas and Luke, my fellow workers. The grace of the Lord Jesus Christ be with your spirit.

As Philemon owed St Paul his very self, you owe the Empire (and thus Us) your prestige and wealth. As St. Paul did, I insist I that as Emperor, I could order you to do what you ought to do, but I prefer to appeal to you on the basis of love. I appeal to you for my long-suffering subjects, the slaves. Are they not sons of God, as you are? Were they not put into your power than they might learn their place in Christ? Therefore I implore you that you now treat them as dear brothers1, rather than as slaves. I write this confidently to you, knowing you also would do more if I asked.

Sealed orders to the Commanders, Centurions, and Legionaries of the Empire

My command went to the Empire to free the slaves, an iron-fisted command in a glove of velvet. It has been a year since the command was given.

Any slaveholder you can reach who has shown mercy, you shall show mercy. Remove them and their families from reprisal, and place them as officers or governors. For did not Christ insist that those who humbled themselves might be glorified?2

As for those who have refused to give up their terrible ways: did not Christ warn that the last would be first and the first would be last?3 Therefore in such cases, make the slaves the owners and the owners the slaves. Make those who sell slaves to be sold as slaves, and those slaves being sold to gain the profit.

Once it is done, there shall be no new slaves. Those who seek to make new slaves will incur these punishments and more. 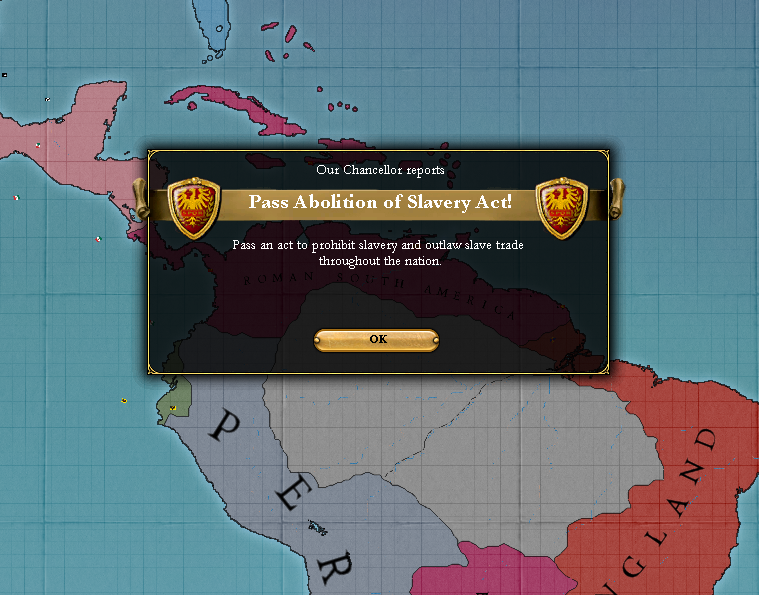