The Empire declared war on Toledo as soon as their truce ended. A few other nations came to their defense. Notably, León did. But it was no enough to save Toledo, which was annexed. The same nobles that gained appointments in newly Imperial Toledo insisted that the region of León be brought under Imperial control. 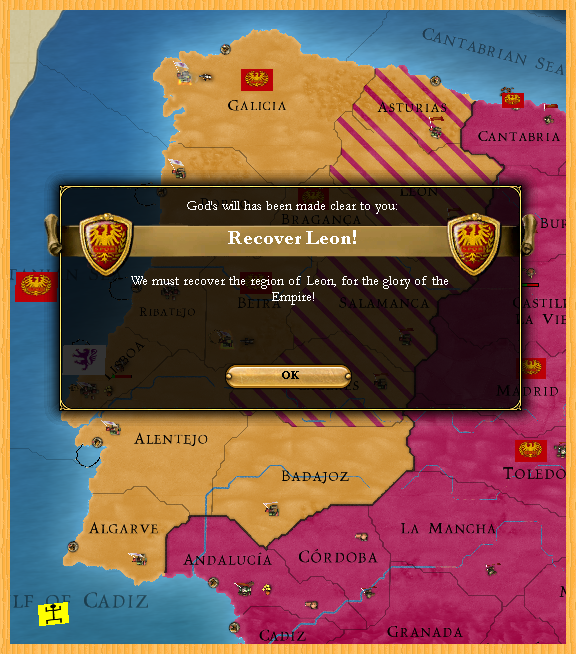 Many of the families that had not been pushing for new Imperial appointments for their sons began to recognize that by not becoming agents of the Empress, their power had been curtailed, and that this trend was likely to continue. They privately wondered if the more major appointments that many of them held might eventually cease to be hereditary. They began asserting their local powers again, resisting the work of the lesser agents (who answered directly to the Imperial government). But some money flowing through the hands of Zoe’s more covert agents uncovered enough embarrassing secrets that these families were brought in line.

The war against León was quickly won. But the region of León was too large and rich to be seized in one war. So a few provinces went to the Empire, and Badajoz became independent. 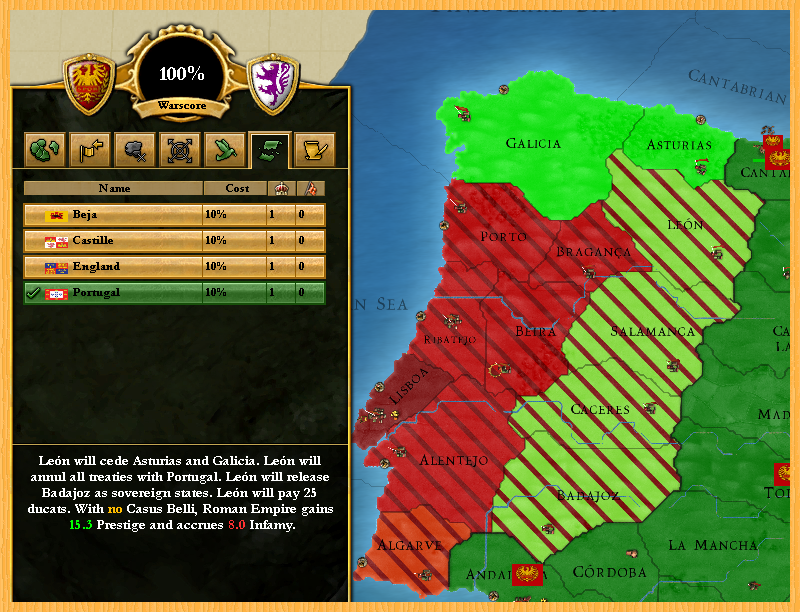 Not surprisingly, Zoe promptly declared war on Badajoz. What was surprising was that León came to their defense. It was not much of a defense, and León was forced to both give up their claims to rule much of Iberia and to release Beja and Castillo Branco as sovereign states. 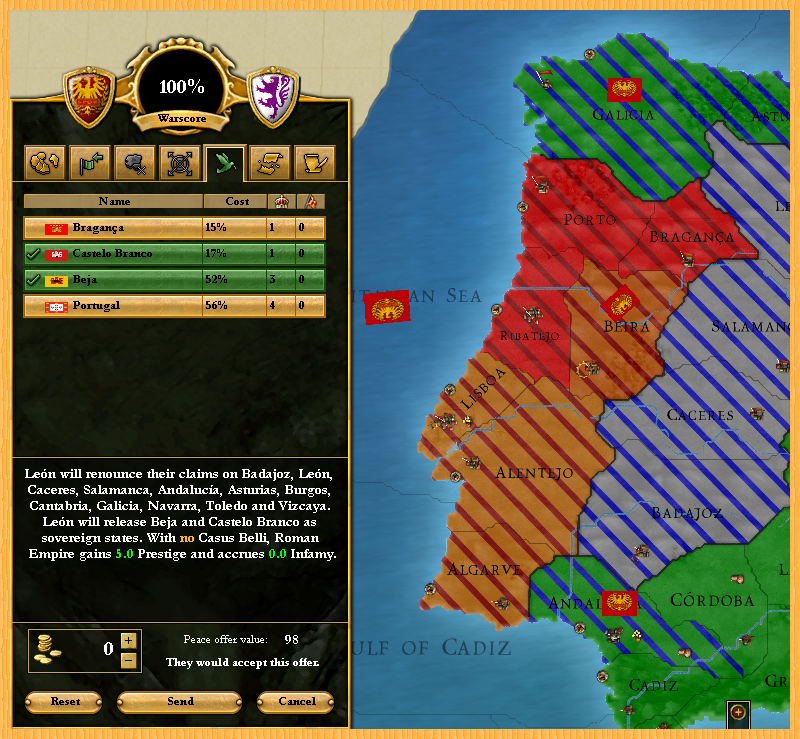 After that peace, Badajoz was completely absorbed. 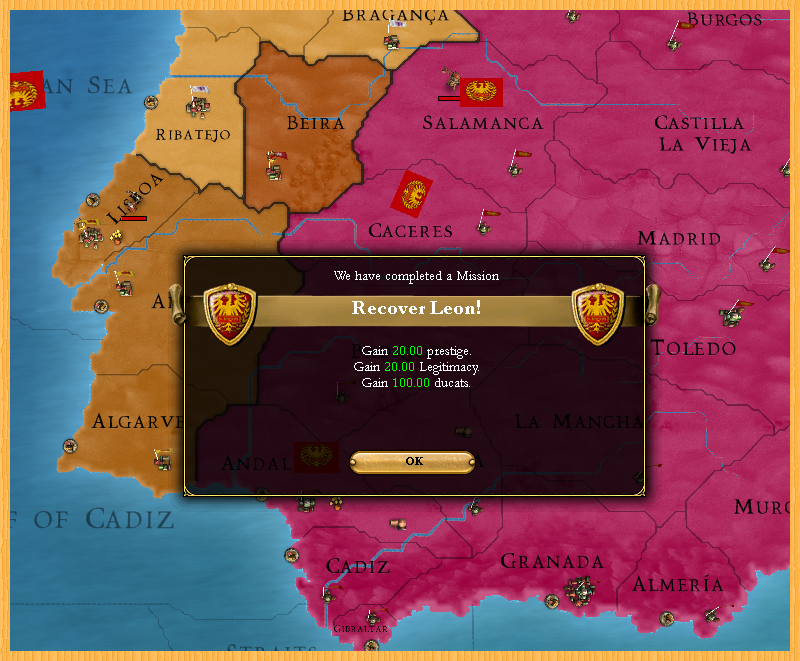 The nobles of the Empire looked north again, to Northumberland.

But Zoe delayed any action. Her reputation was bad from the Iberian wars, and not getting any better thanks to the Greek nobles’ work to supplant locals in Britannia. However, Bavaria soon made a legal case that since the Empire had not sought to force their claim to rule several provinces, that the Empire had in fact abandoned that claim. It was nonsense, of course, but the kind of nonsense that would make ruling those provinces later troublesome. And in the immediate, Zoe suffered a tremendous loss of prestige. She needed something to restore the people’s faith in her, and only a victorious war could suffice in the near-term. 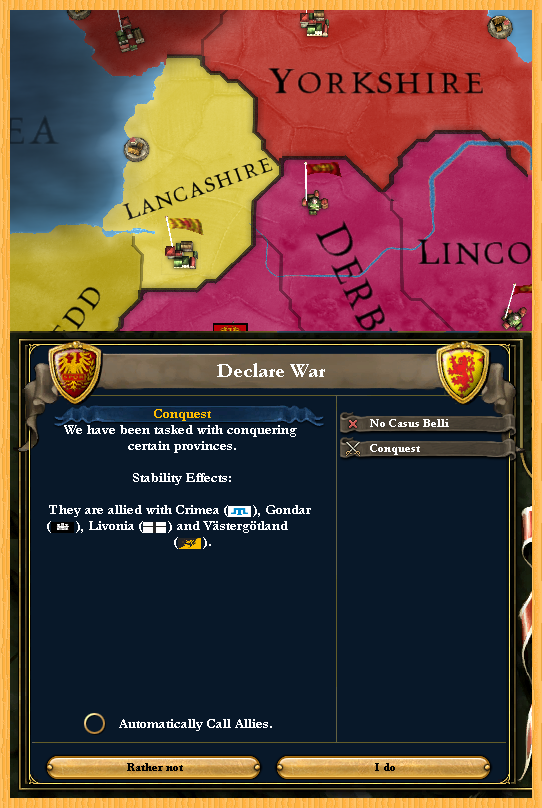 And then the nobles complained about commoners being giving military commissions. Zoe needed the legions strong, so she refused to forbid the occasional practice of meritorious promotions, and the nobles again worked to resist her rule. Other nobles took to fighting amongst themselves. Fortunately, a gift from the state was able to buy peace between them. The discovery that Imperial agents were taking inordinate bribes didn’t help the stability of the Empire, either. 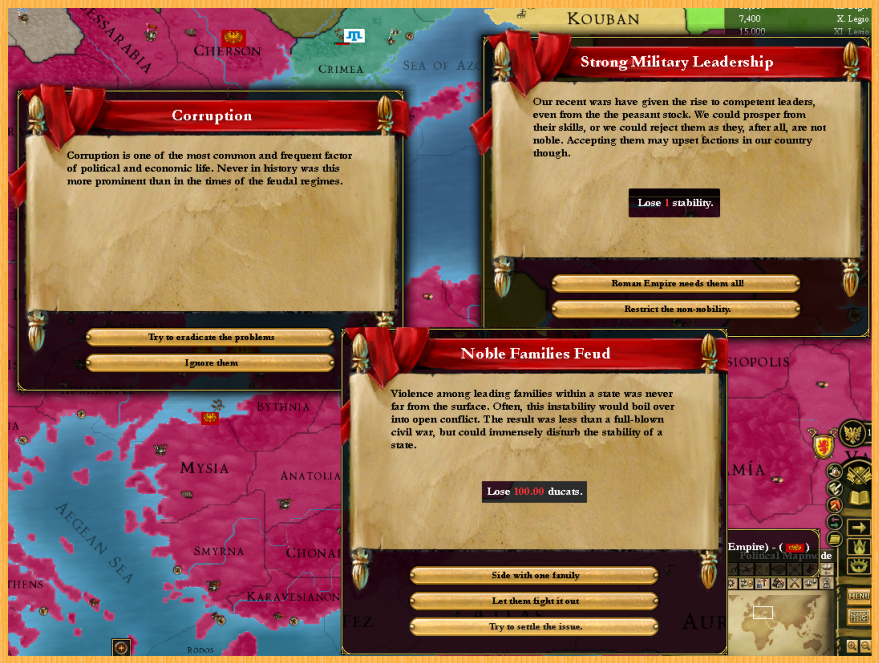 But the victory against Scotland did help her prestige. 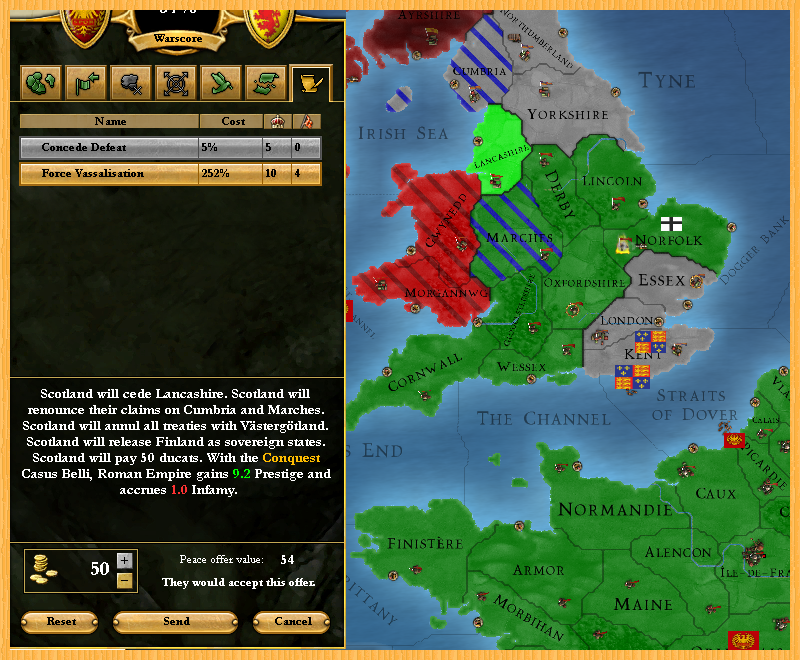 As did the war against England, where the Legions proved the usefulness of their new pike square tactics. 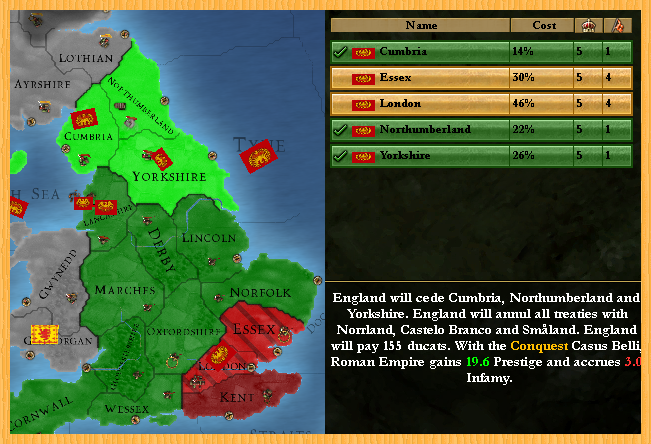 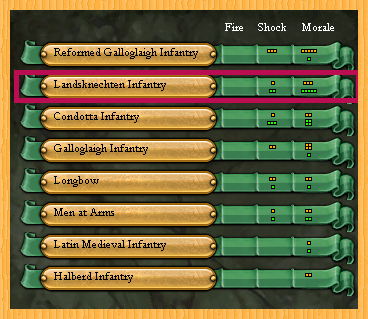 When Zoe restricted the privileges of the nobles yet further, Bartholomaios Melisurgos, an insane noble who claimed to be the rightful Emperor rebelled in Suakin. His insanity was demonstrated by the fact that he rebelled in a province where XVII. Legio was garrisoned. 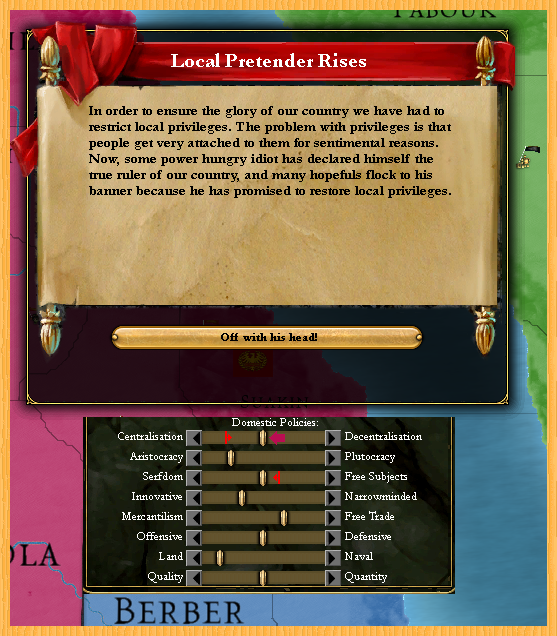 With the acquisition of Northumbria, Zoe listened to request from her nobles again. After all, nobles who felt they had a say in the government were not so inclined to revolt. A faction of Iberian nobles claimed a navigator in their employ had proved there was a western route to India. As this would benefit the western Empire if discovered, Zoe agreed to send an explorer at the first opportunity. 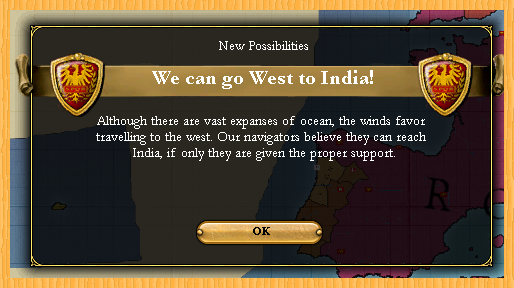 But when Konstantinos died while on a tuna fishing expedition, Zoe became wary of sending more people over the sea. Konstantinos’ son, Konstantios, was soon after declared heir. 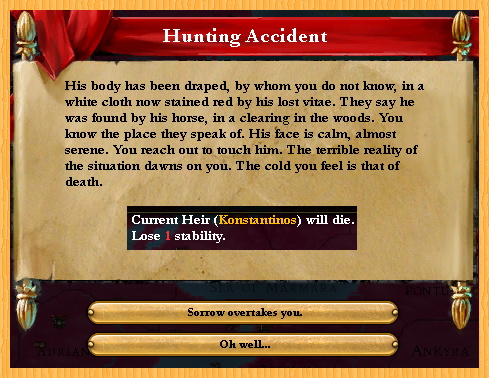 And in 1499, Zoe declared a series of wars to reclaim several Imperial provinces, before their current owners could claim they did not belong to the Empire.