Konstantios had been faced with a dilemma: he could accept a Timurid surrender and prevent a certain devastating loss of soldiers, or he could keep fighting and resettle some strategic Timurid provinces, bringing them into the Imperial fold. 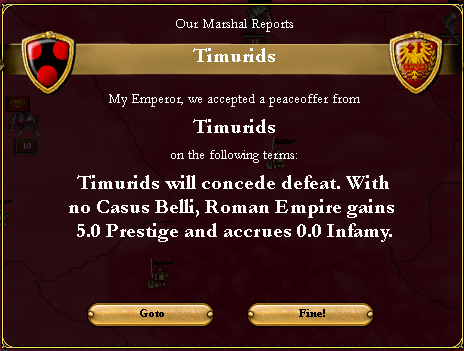 Konstantios knew he needed the support of the military to hold the Empire together. As well, a time of peace could be put to use strengthening the Empire, while the Timurids’ multitudinous wars would only cause them to weaken. On June 18, 1410, he accepted the surrender.

With the end of the war, Konstantios had his agents focus on making the Empire more productive. 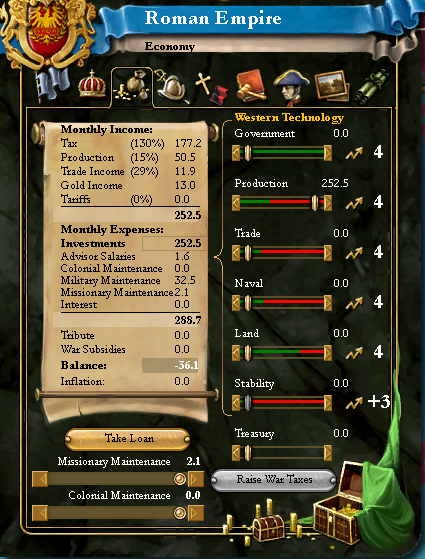 Meanwhile, the armies of the Empire were moved about, garrisoning the various regions. The most elite soldiers were sent to Constantinople, to join the more limited Scholai Palatinae. The other armies were renamed for the region they garrisoned.

During this peace, Heraklios Doukas, heir to the throne, decided to go hunting. The day passed and the dogs found no scent. As the sun was sinking in the west, they finally found a boar. In the deepening shadows, Heraklios missed the thrust with his boar spear, and before anyone could react, the boar had dealt him a fatal wound. That they killed the boar shortly thereafter was scant comfort.

Konstantios did not seem to react when he touched his son’s body and felt the chill of death. Whether it was fear of looking weak, the attempt to stay strong for the sake of the Empire, or something else that led him to not show his grief was unknown. The rumors were known: that he was cold, that he was uncaring, that he had preferred one of his other children to be his heir. He was not viewed quite the same thereafter. 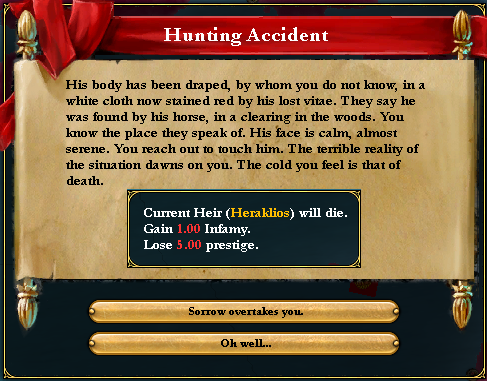 Konstantios continued to build the cultural standing of Constantinople, recruiting artists from northern Italy. Their triptych honoring the life of Heraklios mollified the rumors surrounding his death a little. 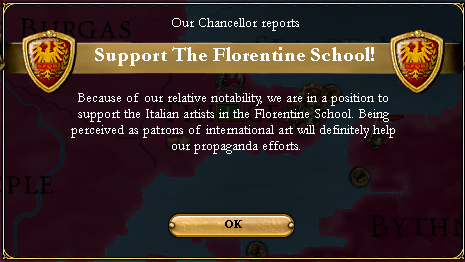 By July of 1411, the armies of the Empire had finally recovered. Thema Ægyptus, Thema Africa, and Thema Gallia were positioned across from England. It was time to reclaim Mercia. 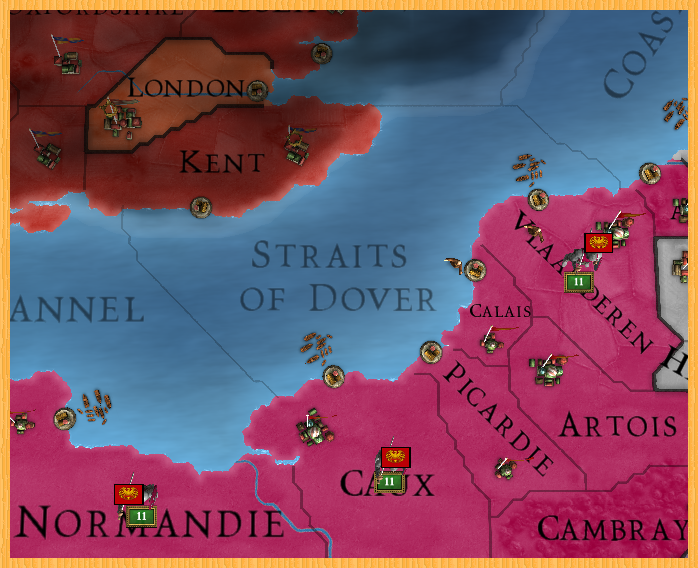 During the Eastern War, England had reconquered Oxford, and were at war to reclaim London, which would push the de Normandie family out of Britain. 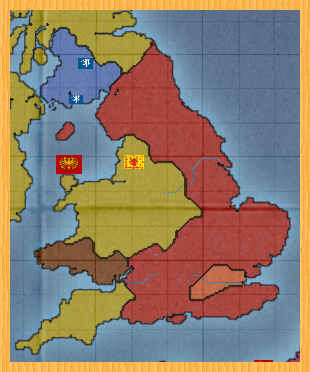 As well, they had formed alliances with several other kingdoms. So the Empire faced a larger coalition in this war. 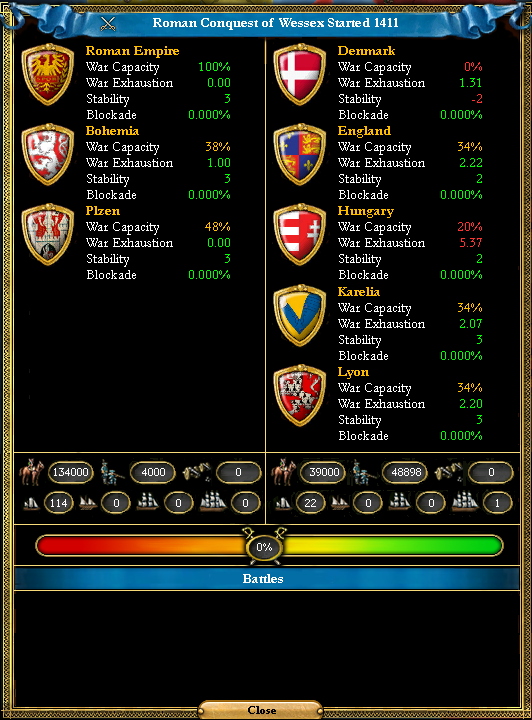 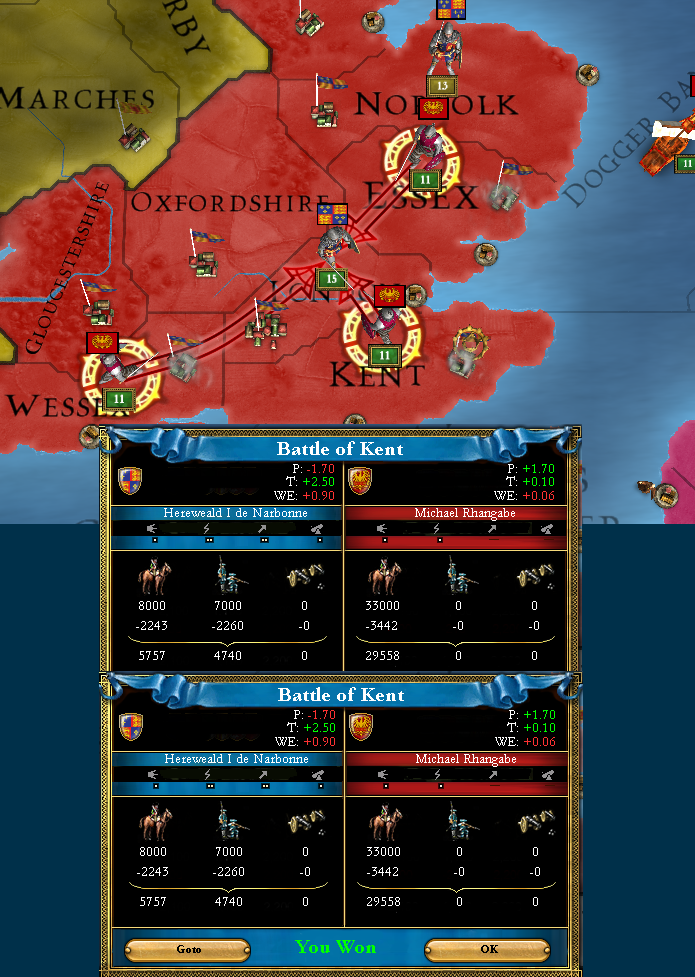 Meanwhile, Thema Croatia hounded the Hungarian army until it was completely surrendered. Thema Dacia joined them to break the Danish siege of Moravia. But a Danish force sought them out instead. 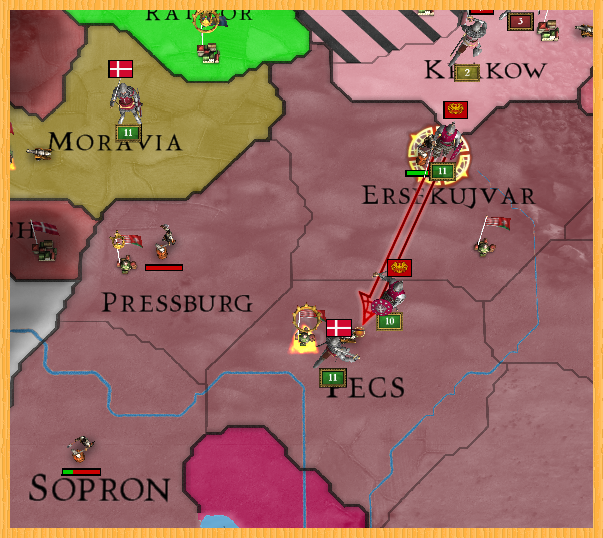 The Empire won the resulting battle, but Danish reinforcements prevented the pursuit that would have been preferred. When the Danish armies marched to the west, the Themas again moved to break the siege of Moravia.

Hungary was the first coalition member to ask for peace. Konstantios had no reason to refuse. 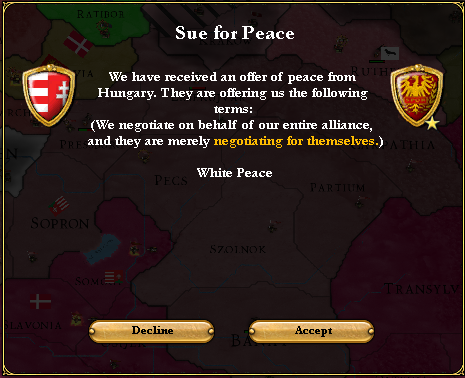 In Moravia, the Themas smashed the Danish besiegers. They moved to lift the siege of Sudety. 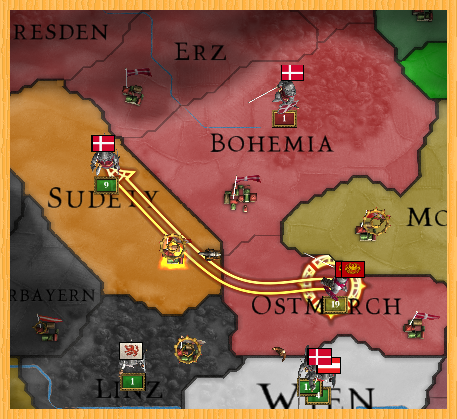 That was swiftly done, and they moved to drive back Danish excursions in Austria and Lombardia.

In August 1412, Lyon was forced to surrender. They agreed to break their alliances, and their leaders would follow the Bishop of Aquitaine rather than the Pope.

England resisted until July 1413, when they finally acquiesced and released most of English Mercia to the Empire. 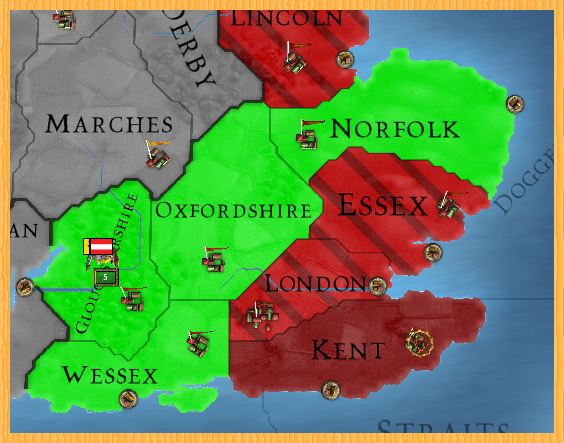 That accomplished, Konstantios accepted the offer of peace from Denmark. 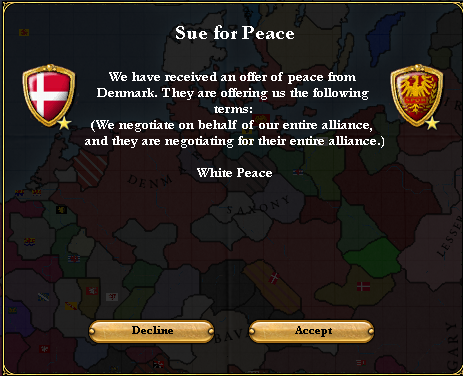 Two other events of significance took place during the war:
A settlement on Madeira found that sugar cane grew well there. 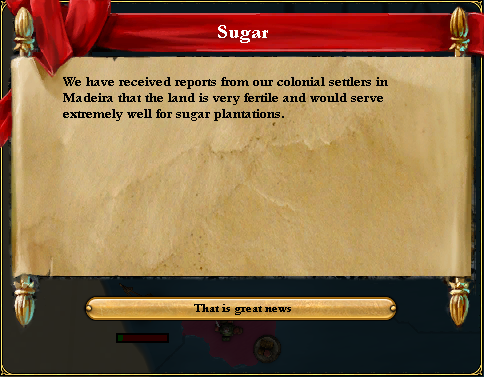 Konstantios sired a new heir on his wife. 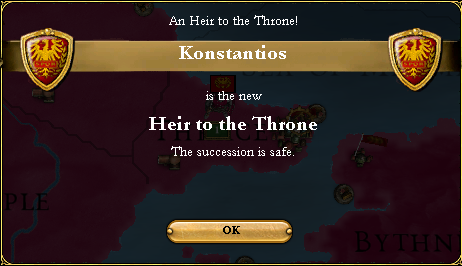