Konstantios XII inherited an Empire with an imperative to conquer all the way to the Rhine. This was very nearly done, but the Kingdom of Schwyz held some of those lands and was heavily influenced by the Netherlands. 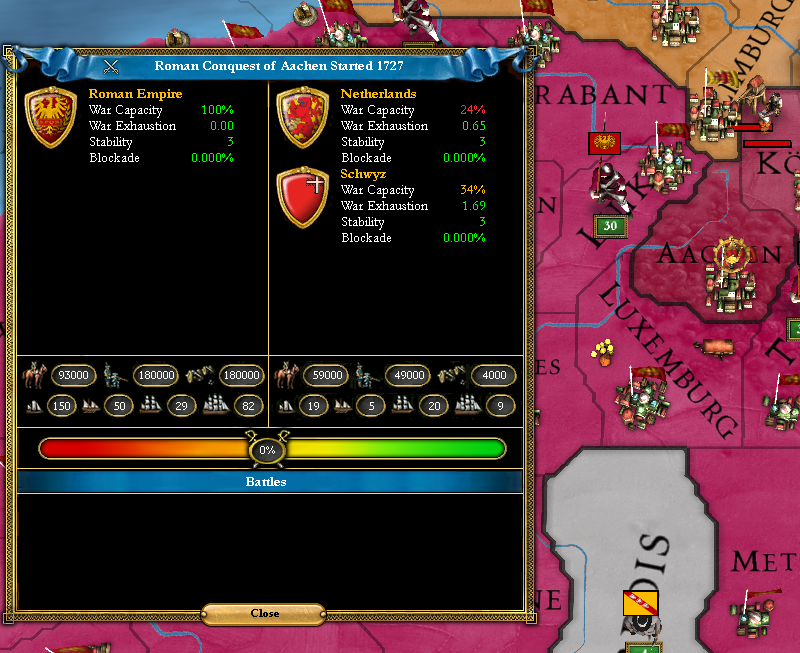 Schwyz would accept nothing but full defeat. The Netherlands took much more fighting and besieging, but in the end, they gave up Breda and Limburg (the Imperial Corps of Engineers having better surveyed the regions of the Low Countries and redrawing the borders on the official Imperial maps1). 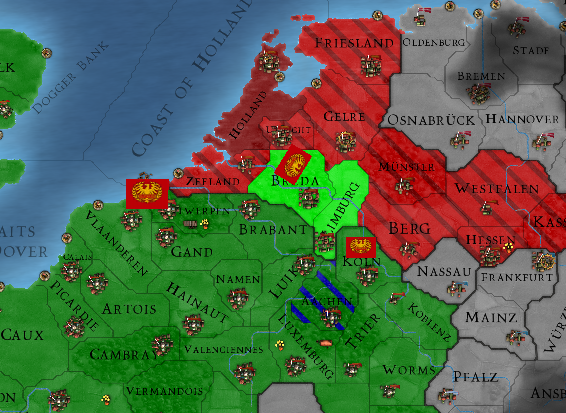 The third Rhineland war was fought against Thuringia for Mainz. The war was straightforward, and Mainz was taken. 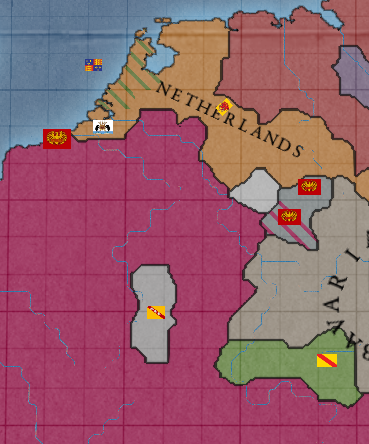 The fourth Rhineland war was fought against Upper Lorraine to annex the rest of their territory. While they fell quickly, their allies took a little longer but soon all agreed to white peaces. 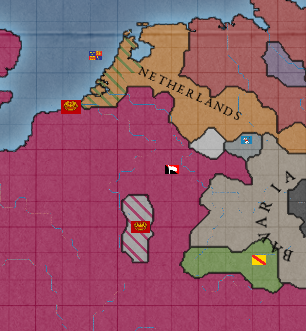 There was a time of peace, but in late 1734, a Russian war against Novgorod escalated into a war between Russia, The Empire, and most of the Empire’s allies against Peru, England, and Novgorod.

X. Legio was sent to take England’s African holdings. Several other Legions were sent to the Americas, to fend off Peru and to take as much as they could from England. But they had to move cautiously, as the English fleet was even more mighty than the Imperial fleets, which lost two battles to the English.

Novgorod was left to Russia. At least until a Novgorod army was spotted marching through Lombardia. XII. Legio and XXIII. Legio soon outmaneuvered this small force, besting them in battle. 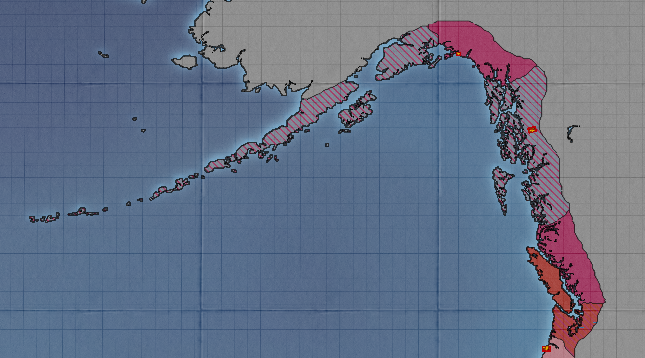 But while VI. Legio destroyed several Peruvian armies in La Plata, English armies were able pour over the border and take much Imperial territory.

The English armies were harder to defeat, but VI. Legio eventually did the job.

XXII. Legio made a bold strike toward the Hawaiian islands, but an English fleet drove them away before they could land. Many transports were sunk, thousand of soldiers drowning at sea.

X. Legio was able to take all of England’s new colonies in the South Pacific. After doing so, it moved towards north-eastern Asia. 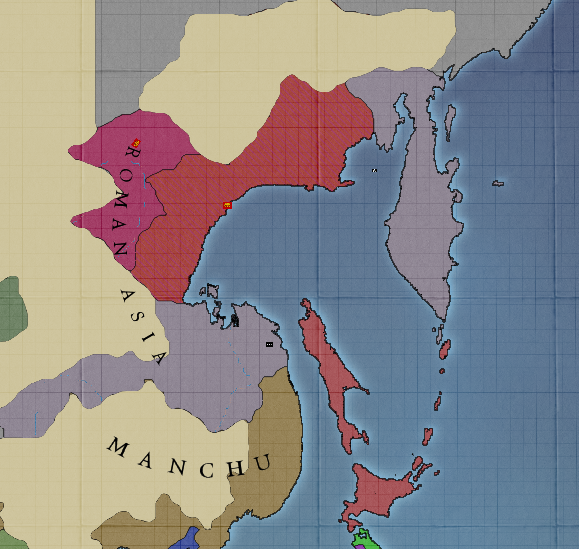 Once any English colonies that could be seized had been taken, Konstantios finally agreed to a peace with Peru. A peace that gave the Empire the few English lands in the Indian Ocean that had not already been taken. 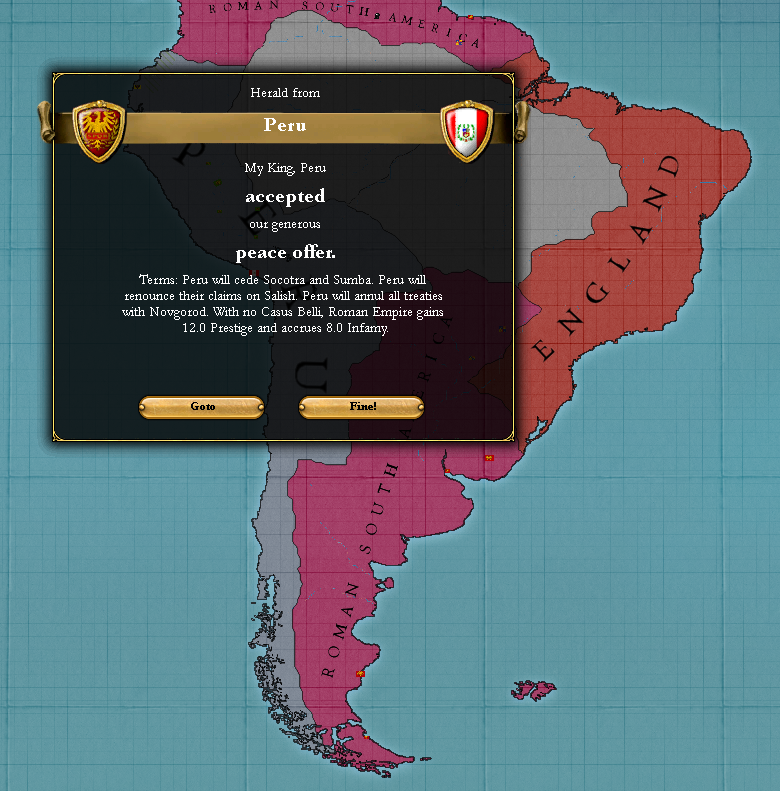 While the Legions were shipped home and brought back to full strength, a more maneuverable mortar was developed and distributed. 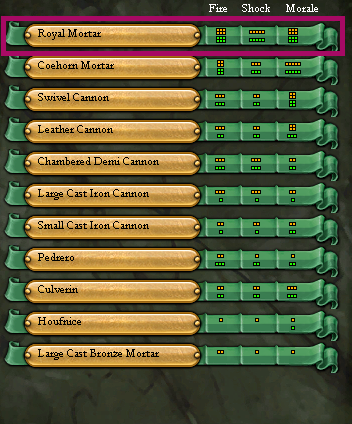 Konstantios was waiting for his reputation to improve when Adal attacked Mutapa. Russia came to Mutapa’s defense, and the next thing anything knew, the Empire was leader in a much broader war. 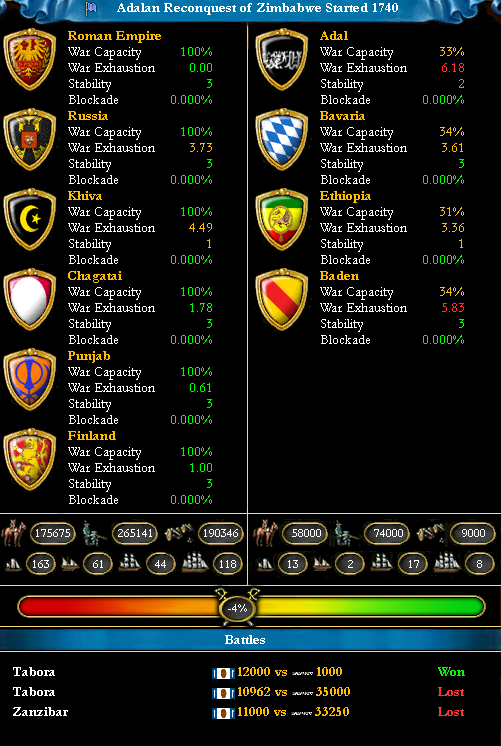 Fortunately, Ethiopia could be bought off for 50 gold. A small price to keep the Empire’s ally in the Empire’s camp. Bavaria was forced to give up Pfalz, the very province that Konstantios had been planning to start a war over in the near future. 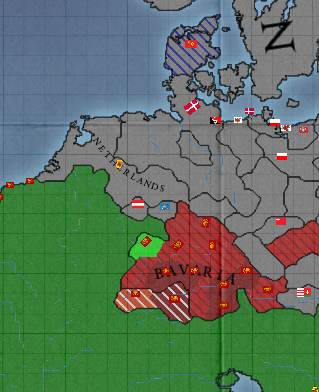 With this, the West Rhine was recovered. Parliament was disappointed when Konstanios declared that no more war would be made in Europe to recover ancient territories:
“We have regained our ancient lands. We do not wish any more German lands or subjects. The Germans have from ancient times been entirely ungovernable, and more recent history demonstrates no end to their chaos. It were best we leave them to their own devices.”

Upon hearing this, Pieter von Zwiebrücken declared that the Netherlands were a nation where all Germans could live, free from Roman oppression. 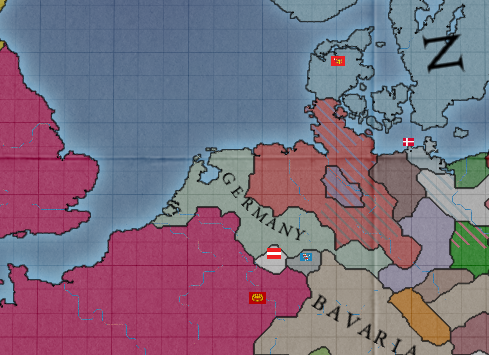 When the Imperial parliament asked Konstanios to capture Lothian from Scotland, he refused and refused to hear any new requests for years.

Baden gave up some land claims and much of their treasury. And eventually Adal was forced to release Swahili, give a little of the south African coast to the Empire, and give up their claims on other lands the Empire had taken previously. 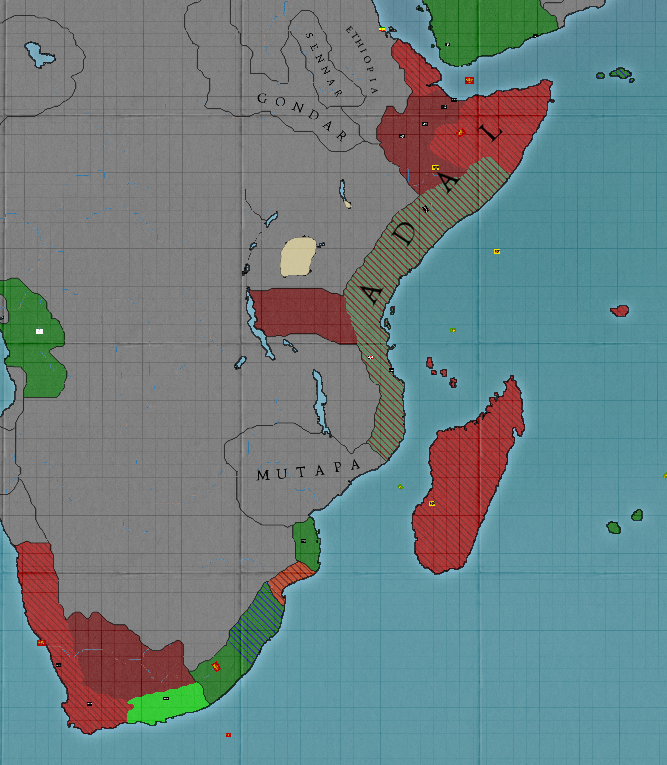 There was a time of peace, but eventually Konstantinos Doukas, heir to the Empire, died in a hunting accident. Konstantios was not entirely convinced of the accidental nature of this death, remembering both the way that several recent emperors had died of ‘natural causes’ and of the way parliament had recently been denied. The resulting purges of the nobility were mercifully minor, and the effects less than rebellious, as their families’ new cadet branches eagerly joined the glory of the Imperial Court. But several who were almost certainly innocent had been caught up in the purge, and many nobles were uneasy about coming to the Emperor’s notice. 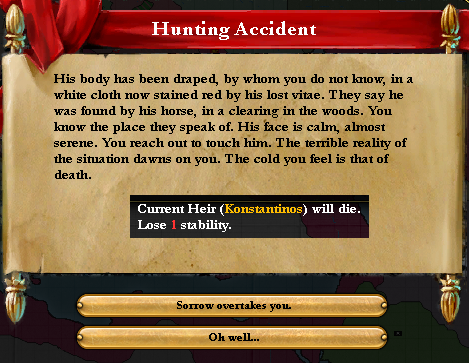 The young Theodoros was immediately declared heir, though he may have learned the wrong lessons from the events that led to his elevation.

When parliament was again allowed to suggest ideas, they asked for the annexation of Austria, and were again rejected and ignored. Konstantios spent nearly a decade focusing on building the Empire’s infrastructure and institutions. These years were peaceful and unsurprising. Until Konstantios XII wrote his most famous of letters.