This was Konstantinos XV of the Empire. He had ascended to the throne in 1328, at the age of 48. 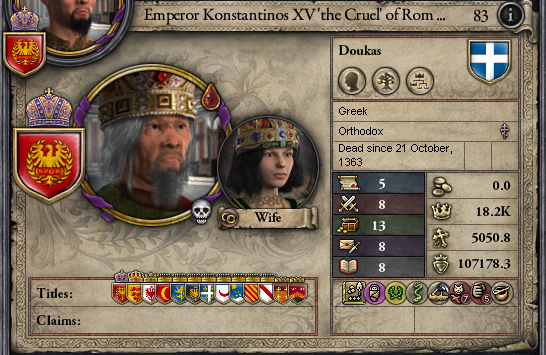 During his time, he increased the authority and power of the position of Emperor. He caused several cities to be founded, cities which grew rapidly. He promoted the growth of universities, recognizing that learning made the Empire strong. As well, he succeeded in reclaiming much of the north-western Mediterranean for the Empire, including most of Aragon and Andalusia.

This was in spite of three major civil wars. Two of those he defeated, the third raged on when he died.

He died on the 21st of October, 1363, eighty-three years old. He was succeeded by his grandson, Konstantinos XVI.